After a period of 19 months, the EU-financed Technical Assistance project Support to the Constitutional Court of Moldova was officially brought to a close on 22 September 2017.

The Constitutional Court of Moldova and the EU delegation opened the Steering Committee Meeting by approving the fourth project team report. It was unanimously agreed that the IRZ team had done an excellent job and that all the intended results had been achieved.

The President of the Constitutional Court, Tudor Panțîru, made clear in his speech how satisfied he was with the partnership with international experts from the IRZ.

Team leader Volkmar Theobald and project manager Teresa Thalhammer, as well as the project manager responsible for the EU delegation, Victoria Neaga, and the Moldovan Deputy Minister of Justice, Eduard Serbenco, all underlined the intensive and effective partnership in their speeches.

To the delight of all those involved, the Ambassador Extraordinary and Plenipotentiary of Germany, Dr. Julia Monar, also took the opportunity to visit the event to find out about the implementation of the project.

Summer School and Moot Court on Constitutional Law in Moldova 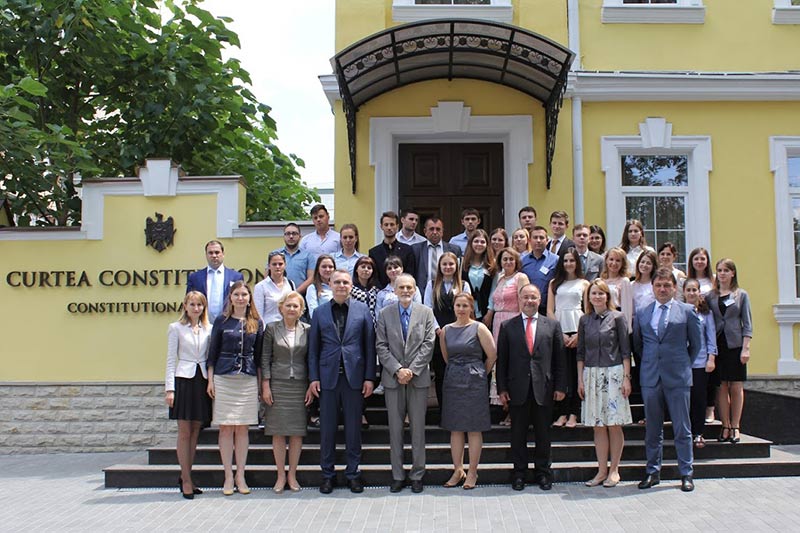 Participants in the Summer School in Moldova

From 1 to 6 May 2017, the IRZ hosted a practical conference on the planned reform of criminal procedural law and penitentiary law in Moldova for a Moldovan delegation led by the Deputy Minister of Justice, Anatolie Munteanu. The IRZ had been asked the previous year by the Moldovans for assistance and advice with the planned reform.

Following on from several previously held expert discussions, the Moldovan guests, all of whom are part of a work group on the reform of criminal procedure, went to Germany for a study visit. The delegation included representatives of the Ministry of Justice and the Ministry of Internal Affairs, the Public Prosecutor General’s Office, judges from various court levels and two lawyers.

Furthermore, intense expert discussions on appeal and pre-trial custody took place with Dr. Oliver Mertens, a judge at the Higher Regional Court and Deputy Chairman of the 1st Criminal Division, and Dirk Schreiner, a judge at the Higher Regional Court and member of the 2nd Criminal Division. The delegation also visited two penal institutions, where talks were held with Angelika Syrnik, Director of the Hagen penal institution, and Hans Georg Heine, Deputy Director of the Schwerte penal institution. Special attention was paid here to the establishment of individual enforcement plans and the role played by the Hagen penal institution in the process of introducing these plans.

Measures to make the cooperation between the various parties involved in criminal proceedings easier, simpler and more effective play a major role in the reform of the Moldovan code of procedure.  This meant that the cooperation between the police and public prosecutors during the investigation process was a particular topic of discussion on visits to the Public Prosecutor's Office in Bonn, with Public Prosecutor Stephanie Faßbender, and to the police headquarters in Bonn, with Martin Goebel, Head of Criminal Investigations, Detective Chief Superintendent Dieter Wald and Detective Chief Inspector Ingo Brehm. The role of the defence counsel in German criminal procedural law and its relationship with investigating authorities was also a particular topic of conversation at the Kretschmer & Schurz law firm.

A final set of expert discussions held at the Bonn head office of the IRZ with Alexander Fühling, a judge at the Local Court of Bonn, and with the additional contribution of a police representative and a representative from the Public Prosecutor’s Office, presented the opportunity to answer any remaining questions.

Finally, the Moldovan guests were able to sum up the knowledge they had gained, which should provide them with inspiration for the ongoing work on the criminal procedural code. At the express request of the Ministry of Justice of Moldova, the IRZ is happy to continue supporting the reform process.