From 12 to 16 July 2016 a delegation of the National Institute of Justice of the Republic of Moldova attends expert discussions in Germany on the German legal basic and further training system.

This Moldovan partner institution of the IRZ is in charge of all issues dealing with basic and further training of judges as well as public prosecutors in the Republic of Moldova. The head of the delegation is the acting Vice Minister of Justice, Anatolie Munteanu.

The working visit was opened with a meeting of the delegation members with the director of the Judicial Academy in Trier, Dr. Stefan Tratz, and professor Dr. Alexander Proelß from the law faculty of the University of Trier.

Another item on the agenda are discussions at the Judicial Academy in Recklinghausen dealing in particular with an e-learning system. There are also expert discussions on the training of legal trainees and the selection and appointment of judges. These are held at the Higher Regional Court of Cologne with its Vice-President Christian Schmitz-Justen and at the IRZ with the former President of the Higher Regional Court of Cologne, Johannes Riedel. 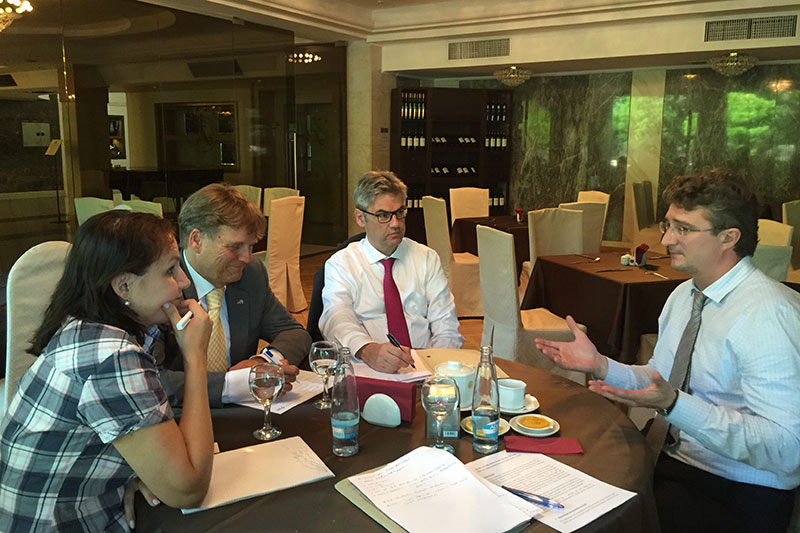 Anatolie Munteanu, Deputy Minister of Justice for the Republic of Moldova; Dr Stefan Hülshörster, Deputy Director of the IRZ; Uwe Stark, a judge at the local court in Siegen, Germany; Aliona Bleah, IRZ representative in Moldova (from right to left)

During an event held in Chisinau on 30 June and 1 July to establish facts and appraise evidence, the Deputy Minister of Justice for the Republic of Moldova, Anatolie Munteanu, met with the Deputy Director of the IRZ, Dr Stefan Hülshörster.

The Ministry of Justice in Moldova is planning a change to criminal procedural law as the next step in the current reform process. The support of the IRZ as a long-term and reliable partner has been requested for this initiative. The meeting served to establish the next definitive steps in the proposed reform process.

Pirkka Tapiola, EU-Ambassador in the Republic of Moldau; Eduard Harunjen, Acting Prosecutor General of the Republic of Moldova; Raisa Apolschii, member of parliament; Vladimir Cebotari, Minister of Justice; Donald Carroll, Country Director of Criminal Justice and Law Enforcement at the Embassy of the United States (right to left)

Almost a month after the new Law on Prosecution was adopted by the Parliament of the Republic of Moldova and a quarter of a year before it gets into force on 1st August 2016, the Ministry of Justice, in close co-operation with the General Prosecutor's Office, invited relevant stakeholders, including members of the media and Civil Society, on 19 April 2016 for a public debate. The conference was organised within the framework of the EU funded project "Support to the Pre-Trial Investigation, Prosecution and Defence Set-Up", IRZ as lead partner is implementing together with its consortium partners Altair and CILC since September 2014.

The event took place in the premises of the Ministry of Justice in Chisinau with high-level participation: As host the Minister of Justice, Vladimir Cebotari, as high-level guests the Head of the Delegation of European Union to the Republic of Moldova, Ambassador Pirkka Tapiola and Donald Carroll, Country Director of Criminal Justice and Law Enforcement at the Embassy of the United States; as representative of the prosecution the Acting Prosecutor General of the Republic of Moldova, Eduard Harunjen, and - from the law-making side - Ms Raisa Apolschii, member of the Parliament of the Republic of Moldova, head of the Permanent Parliamentary Legal Committee for Appointments and Immunities and many other stakeholders of the reform process of the judiciary in Moldova.

The Minister of Justice Mr Cebotari called the law an important step in the reform process and stated that Moldova has not completed its reforms but that there was still much work ahead.

In his opening-address, EU-Ambassador Tapiola called the new Law on Prosecution a 'milestone'. He expressed the appreciation of the European Union that the recommendations of the Venice Commission were implemented. Mr Tapiola expressed the hope that all stakeholders would be involved in the implementation of the law. "I would like to appeal to all of you to find consensus for a smooth implementation of the law - as otherwise the results would be very limited", Mr Tapiola said. He informed the participants that the European Union conducted a peer revision of Moldovan law from November 2015 on, which results would be published at the end of May 2016 and that a working group would then discuss the results of democracy reforms in the Republic of Moldova.

Donald Carroll, Country Director of Criminal Justice and Law Enforcement at the Embassy of the United States of America, congratulated Moldova, that the new Law on Prosecution would be a long expected and long overdue reform. But he also warned that successful reforms are not coming by the number of laws, but by the quality of their implementation. He said that all parts of the society must be included, starting with the institutions of the judiciary and all parts of civil society.

Acting Prosecutor General Eduard Harunjen drew the attention to the process of a successful implementation, which was later a central point of discussion. Mr Harunjen gave an insight on how the new law is going to be implemented. He mentioned that there would be a need for deeper changes in the mentality of prosecutors and that currently trainings would go on to prepare all prosecutors for the changes. He also stressed the need to rethink the working process and that the internal reform of prosecution would take time. "We are doing a reform with a long term perspective. We have established a working group that is currently implementing what has to be done for the new law. This includes training-events to prosecutors as well as changes at the level of the staff." He estimated that in August 2016, when the new Law of Prosecution gets into force, the prosecution would be ready for the changes, by providing training in applying new tools for example in the field of fighting corruption. In this frame he also thanked the European Union and other donors for their support, the provision of technical assistance and training events with international experts that would bring closer the best European practice that proofed to be effective.

In the due course of the debate the participants discussed details of the planned law on specialised prosecution, which is foreseen to pass the Parliament in May or June 2016