Visit of the Moldovan Public Prosecutor General in Germany 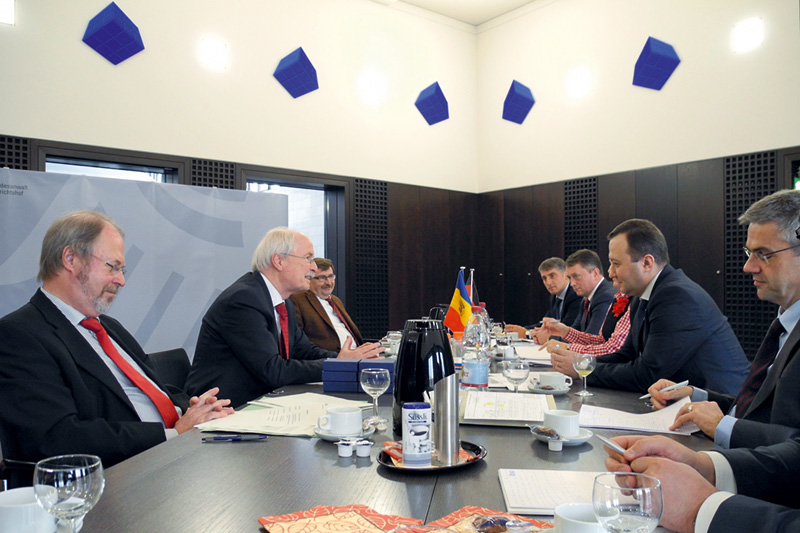 At the invitation of the IRZ a delegation led by the Moldovan Public Prosecutor General Corneliu Gurin visited Germany for expert meetings from 3 to 7 December 2013. This working visit followed the long-standing previous consultations with the IRZ with regard to the reform of the Moldovan judiciary and in particular the system of public prosecution, as well as talks which the German Chancellor Angela Merkel had held last year in the Moldovan capital Chisinau. Therefore this visit was also of particular interest to the Federal Chancellery. It was furthermore strongly supported by the German Ambassador to the Republic of Moldova Matthias Meyer and financed within a special project of the Foreign Ministry. The working visit was particularly topical against the background of the signing of a joint reform concept of the Ministry of Justice and the Office of the Public Prosecutor General of the Republic of Moldova and the initialling of the Association Agreement by the Republic of Moldova with the EU at the Eastern Partnership Summit in Vilnius.

The delegation was welcomed by the Deputy Director of the IRZ Dr. Stefan Hülshörster. The first expert talks took place in Karlsruhe, where the delegation met the Public Prosecutor General of the Federal Court of Justice Harald Range and further federal public prosecutors. The visit was rounded off by meetings with the Vice President of the Regional Court of Karlsruhe Helmut Perron, the Vice President of the Local Court of Karlsruhe Annette Beese and further judges and public prosecutors. These covered the competences, functions and the cooperation between the court and the office of the public prosecutor.

Thereupon, the delegation travelled on to Berlin, where it was first received for talks by the Director General of the Directorate General – Judicial System - of the Federal Ministry of Justice, Ms Marie-Luise Graf-Schlicker. At the Federal Chancellery the delegation met Dr. Joachim Bertele, who is responsible for the cooperation with Southeast Europe and the Republic of Moldova, amongst others. The Public Prosecutor General in Berlin Ralf Rother and his colleagues facilitated a hands-on exchange of professional experience. Since the professional exchange focussed on the necessary efforts to fight corruption, amongst other topics, a meeting was also organised with the Board Member of Transparency International Deutschland e.V, Dr. Gisela Rüß. The talks in Berlin were also attended by the Ambassador of the Republic of Moldova, Aureliu Ciocoi.

This working visit by the Moldovan Public Prosecutor General follows a series of cooperation measures, which the IRZ already implemented with its Moldovan counterparts in the past. In view of the persisting problems as well as against the background of the great Moldovan interest especially in receiving advice by Germany, the IRZ will continue and intensify these expert talks. Amongst other initiatives, the former Public Prosecutor General Harald Selter will travel to Chisinau before the end of this year to hold analysing talks for the drafting of a reference guide for the public prosecutors' work.