Germany and Montenegro sign a Working Schedule for a Cooperation Agreement

On 26 November 2015, State Secretary Dr. Stefanie Hubig and the Minister of Justice for Montenegro, Zoran Pažin, signed a working schedule for a cooperation agreement between the two ministries in Montenegro's capital Podgorica, in the presence of the German Ambassador Gudrun Steinacker. The event also received extensive coverage in the national media.

The agreement provides, amongst other things, for the further development of the collaboration with the Constitutional Court of Montenegro and with the country's centre of legal training. Support will also be provided for the newly formed special prosecution office in their efforts to combat organised crime and corruption.

The agreed additional measures follow on from the many years' of work carried out in these areas by the IRZ in Montenegro. Michael Haußner, a former Secretary of State, is also supporting the Ministry of Justice for Montenegro with a project that has been ongoing for several years and is funded by the German Federal Foreign Office from German funds allocated to the Stability Pact for South-East Europe. Michael Haußner used to be a permanent advisor to the Ministry of Justice in Croatia when the country was preparing to join the EU.

Secretary of State Dr. Stefanie Hubig also made the most of her stay in order to learn in situ about the many years' of successful work carried out by the IRZ in Montenegro. She also held extensive talks with Minister Pažin, the President of the Constitutional Court of Montenegro, Desanka Lopičić, and the Chairman of the Committee for Political Systems, Justice and Administration in the Montenegro parliament, Rifat Rastoder, to discuss the current legal requirements for preparing for future entry into the EU.

In our changing times, public and political debate is particularly important. This is guaranteed by freedom of speech and of the press. The relevant legal framework and the appropriate conduct of constitutional courts therefore play a central role here. With this in mind, the Constitutional Court of Montenegro and the IRZ organised a conference on freedom of speech and of the press, which took place from 29 to 31 October in Bečići and was attended by representatives of various constitutional courts in the region.

The conference was opened by the President of the Constitutional Court of Montenegro, Desanka Lopičić. The German Ambassador Gudrun Steinacker also gave a welcoming speech in the local language. She took the opportunity to play an active role in most of the conference.

Professor Udo Steiner, a former judge at the German Federal Constitutional Court then gave an introduction to the principles of jurisdiction at the German Federal Constitutional Court concerning freedom of speech and of the press, using four selected cases. All of the contributions were the subject of intense discussions, during which participants were able to gain a deeper insight into the different legal contexts during the course of the event.

One of the findings was that constitutional courts in Southeast Europe are increasingly following the jurisdiction of the ECtHR and refer to this extensively. At the same time, their decisions - including those overturning judgements passed by the ordinary courts against journalists due to their critical reporting on politicians and their circles - reveal that this is a topic with considerable practical relevance and that it requires the constitutional courts to keep a close eye on things to ensure that the basic right to freedom of speech and freedom of the press is upheld in practice 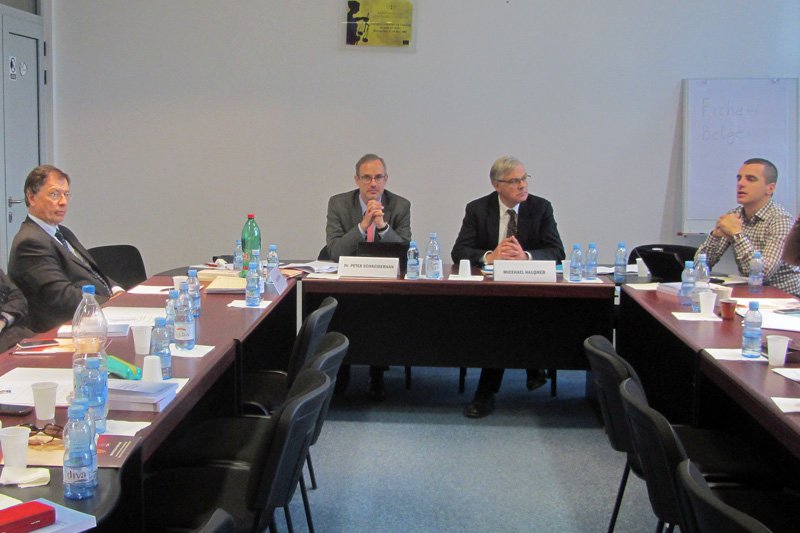 E. Pfaff, Presiding Judge at the Higher Regional Court of Munich; Dr P. Schneiderhan, Senior Public Prosecutor in Stuttgart and Member of the Executive Committee of the German Association of Judges; M.l Haußner, State Secretary, ret. and Permanent Advisor to the Montenegrin Minister of Justice (from left to right)

The IRZ organised expert talks on "the Introduction of a Special Public Prosecutor's Office for the Fight against Corruption" in cooperation with the Judicial Training Centre of Montenegro in Podgorica on 23/24 October 2014.

The two-day expert talk covered the systematics and technique of corruption investigations in the various typical fields of corruption such as the construction industry, civil service and administration of services, invitations to tender and municipal administration, with a focus on the cooperation between the public prosecutor's office and the police. The IRZ provided the participants with translations of the German Code of Criminal Procedure and the Guidelines for Criminal Proceedings and Proceedings Concerning Regulatory Offences in their own language which met with great interest.

It was outlined during the talks which techniques exist to retrieve information and evidence, and the cross-border cooperation between judicial bodies was intensively discussed, in particular recent European instruments such as the investigation order, the European arrest warrant, Eurojust and the European Judicial Network.

The speakers were Eduard Pfaff, Presiding Judge at the Higher Regional Court of Munich, Dr Peter Schneiderhan, Senior Public Prosecutor in Stuttgart and Member of the Executive Committee of the German Association of Judges, as well as Michael Haußner, State Secretary, ret. and Permanent Advisor to the Montenegrin Minister of Justice. The expert talk was attended by twelve Montenegrin public prosecutors, judges and members of the Ministry.

The event is part of the support which the IRZ provides to Montenegro, which has been an EU accession candidate since December 2010.