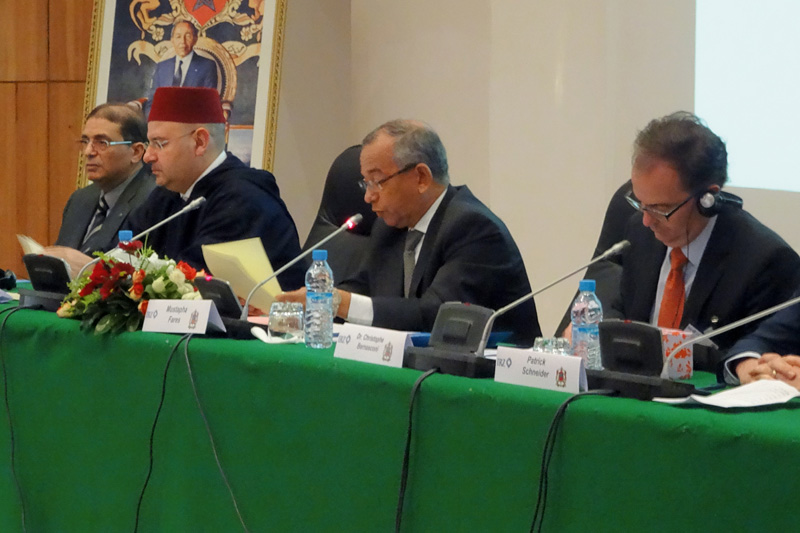 The President of the Moroccan Court of Cassation, Mustapha Farés, reading the welcoming address at the conference. Also on the podium: Abdelilah Lahkim Bennani, Moroccan Vice Minister of Justice (2nd from left) and Dr Christophe Bernasconi, Permanent Bureau of the Hague Conference (right)

The IRZ was also able to operate in Morocco for the first time in 2014. Morocco has achieved considerable constitutional reforms in recent years. Amongst other things, the independence of the judiciary has been entrenched in the Constitution. At the same time, however, the King retained his dominant role, which is reflected in considerable powers in the fields of security, domestic and foreign policy. Within this framework, a complex discussion is ongoing as to the future shape of constitutionally-guaranteed rights. Amongst other things, the judiciary has a self-confident professional organisation, and civil society has joined together in political associations in many ways. In general terms, the IRZ has been able to observe that there is considerable interest among the judiciary and at the Ministry of Justice in cooperating with Germany and the IRZ, and that there is a corresponding willingness to reform.

The IRZ organised two events in 2014 together with the Moroccan Superior Court, the “Cour de Cassation“, and the Moroccan Ministry of Justice. The first conference addressed the ratification of the International Criminal Court’s Rome Statute. Morocco acceded to the Statute in 2000, but has yet to ratify it due to several reservations. The second event was the continuation of a multilateral conference organised in Tunisia in 2013 with the participation of eight Arab states. This event was organised together with the Permanent Bureau of the Hague Conference, and its topical focus was on international civil law cooperation within the Hague Conventions.