Introduction to toxicology seminar in Casablanca

On 10 July 2018, the IRZ together with the Moroccan Public Prosecutor’s Office in Casablanca, organised a seminar on “An introduction to toxicology”. This took place as part of the “Cooperation with the Kingdom of Morocco in the field of legal and forensic medicine, with particular consideration paid to the concerns of the Moroccan justice system” project. The IRZ is coordinating this project between 2017 and 2019 as part of the project financed by the German Foreign Office (“Transformation partnerships with North Africa/the Middle East”).

Experts from the Berlin Charité gave the participants from public prosecutor’s offices and legal and forensic medicine an overview of toxicology in Germany and pointed out the methods that are currently used for detecting toxic effects.

Following an introduction to the legal framework and terms of forensic toxicology, the speakers talked about the systems used for toxicological examinations. Urine, blood, hair and organs can be used to make statements about the possible cause of death by various substances.

The German experts used examples of cases to demonstrate the particularities of carbon monoxide poisoning, which was used back in ancient times as a means of suicide or murder weapon. The last lecture of the seminar was about the advantages and disadvantages of hair analysis. The lecture dealt in particular with the time window for proving substance misuse and the formal specifications for analysing test subjects.

The participants actively took part in the rounds of questions and discussions that followed the lectures. The introduction to toxicology was a good starting point for talking about the current situation and the cooperation between toxicology institutes, legal and forensic medicine and the public prosecutor’s office in Morocco. Unlike in Germany, toxicology in Morocco is not associated with institutes of legal and forensic medicine, which means that communications between the two different authorities do not always run smoothly.

Further seminars on legal and forensic medicine are planned for Morocco after the summer break. The Moroccan partners continue to show a great deal of interest in the subject.

The event was part of a three-year project due for completion in 2019, which the IRZ is leading together with the Institute of Legal and Forensic Medicine at Charité – Universitätsmedizin Berlin, supported by the German Foreign Office as part of the transformation partnerships with North Africa/the Middle East.

The event began with a visit to the German Federal Ministry of Justice and Consumer Protection, where the speaker and regional court judge, Daniela Obermeier from the RB3 “Criminal proceedings (investigation process, enforcement measures)” division outlined the cooperation between the justice system and legal and forensic medicine from the German point of view. Following an introduction to the structure and organisation of the German Federal Ministry, the lecture dealt with the legal status of legal and forensic medicine in German criminal proceedings. The speaker explained specifically how legal and forensic medicine is involved in criminal proceedings and how the justice system deals with any potentially inaccurate reports.
During the subsequent visit to the German Association of Judges, the participants learned from Peter Faust, Presiding Judge at the Regional Court of Berlin, how expert opinions are analysed in court. He talked in particular about recognising signs of torture and the use of force.

On the second day, expert discussions were held at the Institute of Legal and Forensic Medicine at the Charité Berlin. The participants were given an insight into the work of the Charité Berlin, followed by a guided tour of the Department of Forensic Pathology and Toxicology. During the expert discussions, the Head of Forensic Pathology and Senior Physician, Dr. Lars Oesterhelweg, explained in detail the various tasks involved in legal and forensic medicine and gave an insight into the current situation of legal and forensic medicine in Germany. He also explained how forensic scientists are trained in Germany. During the subsequent discussions, Dr. Oesterhelweg answered questions on the production and evaluation of forensic reports.
In the afternoon, the Moroccan guests attended expert discussions with Udo Gabriel from the department responsible for investigating crime scenes and evidence at the Berlin homicide division. Udo Gabriel gave details of the work of the homicide division and relations with the police, public prosecutor’s office and legal and forensic medicine. During the subsequent expert discussions on “securing evidence”, the participants learned how the securing of evidence by police and by forensic scientists is differentiated and the role this plays in the production of expert opinions.

This study visit organised by the IRZ was met with a great deal of interest by the participants, who made the most of the opportunity to ask plenty of questions and take an active part in discussions.

Seminar on “Professional, vocational and artistic training for prisoners” in Rabat 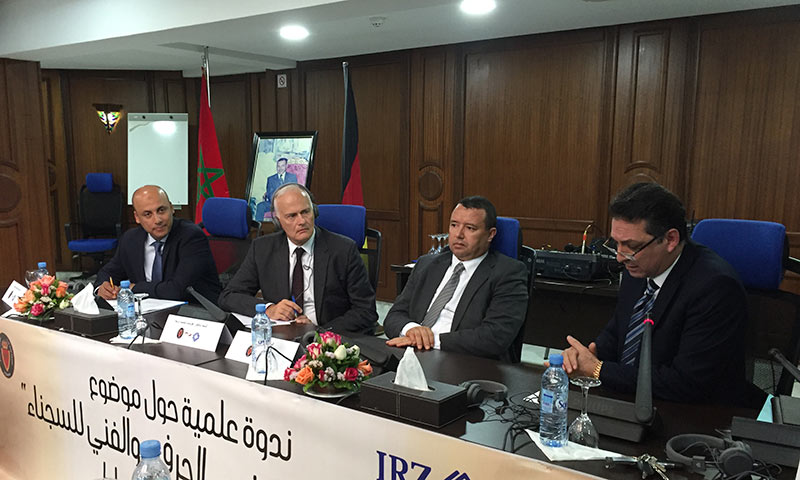 On 10 and 11 May 2018, the IRZ together with the General Delegation for Prison Administration and Reintegration (DGAPR) organised a seminar on “Professional, vocational and artistic training for prisoners” in Rabat, Morocco. The event took place as part of the “Cooperation with the Kingdom of Morocco on Prison Management” project, which the IRZ is coordinating between 2017 and 2019. This project is being financed by the German Foreign Office as part of the Transformation partnerships with North Africa/the Middle East.

The seminar was aimed at teaching participants about the potential for training prisoners to ensure their successful reintegration. As a first step, the mechanisms for establishing further training requirements, such as classifying and diagnosing prisoners, were introduced. The seminar continued with a look at training opportunities, the work situation itself and qualifications for prisoners. The participants also learned about local circumstances as far as training is concerned, partnerships with the private sector and the involvement of external parties, for example for the recognition of qualifications.

The event was opened by the Secretary General of the DGAPR, Younes Jabrane, and the German Ambassador in Morocco, Dr. Götz Schmidt-Bremme. The German experts taking part on behalf of the IRZ were Katja Adolph, Head of Employment and Qualification at the Berlin young offenders’ institution, and Mirjam Drechsel, Head of Employment and Qualification at the women’s penal institution in Berlin. The German Foreign Office was represented by the Ambassador, as well as by Antje Gade, Head of the Legal and Consulate department at the German Embassy.

The Moroccan government has been reacting to the challenges facing the prison system for several years now and has carried out some serious reforms in this area. Since the establishment of the first training companies five years ago, 56 training companies have now been set up and others are in the planning stage. The number of prisoners benefiting from training has increased from 5,000 to 9,000 in that time.

The participants showed a great deal of interest in the seminar, which was reflected in the large number of questions and feedback on the situation in Morocco. The project will be continued with a study visit to Berlin on the same subject in June 2018.