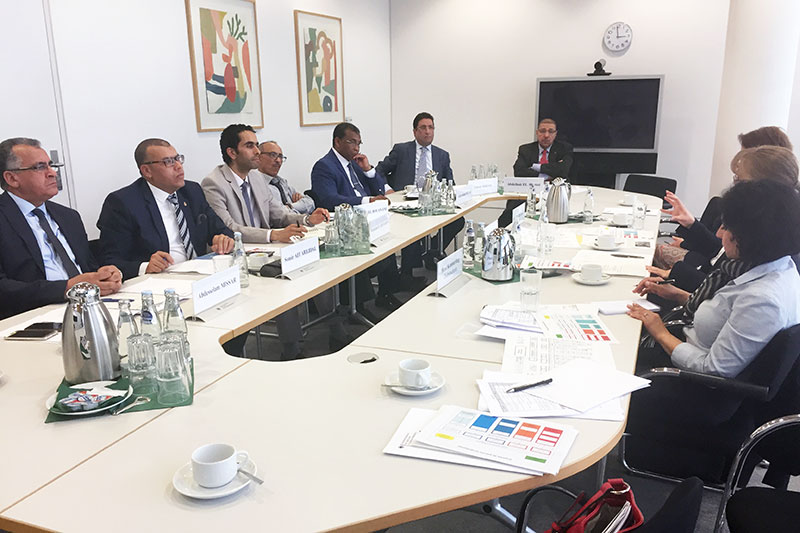 Expert discussions with the Moroccan delegation at the BMJV

From 22 to 25 May 2017, the IRZ organised a two-day study visit to Berlin on the “Independence of the Judiciary” for a delegation from Morocco. The event for senior public prosecutors, judges and law professionals from other disciplines in the Moroccan Ministry of Justice was part of a project financed by the German Foreign Office (Transformation partnerships with North Africa/the Middle East).

The visit followed on from talks at the last conference, which was held at the Moroccan Judicial Academy in Rabat in April. The subject of judicial independence is an elementary component of the reform agenda for the Moroccan justice system and is a priority for the progress of judicial reform.

The Moroccan guests were extremely interested in discussing judicial independence and in finding out about how it works, using German experience as an example.

The delegation was welcomed to expert talks at the German Federal Ministry of Justice and Consumer Protection (BMJV). The focus here was on the “Independence of the Judiciary in Germany”. Particular attention was paid to the composition of courts in Germany, judges’ salaries in Germany, the work of judges at the BMJV and the legal framework for judges.

Further expert discussions held at the Local Court of Berlin-Tiergarten dealt with many other topics concerning judges:

The last port of call for the delegation was the German Association of Judges, where judges’ official duties, E-Justice and the limitations of judicial independence were discussed.

The Moroccan guests showed a great deal of interest, actively taking part in the exchange of experiences by asking lots of questions and making remarks. They were able to discuss various topics intensively during the talks, allowing them to gain a deep insight into the way the courts work in Germany.

Nevertheless, there is still a need to discuss the independence of the judiciary further and in more depth. The IRZ and the German Federal Foreign Office will continue to support the reform efforts in the Moroccan justice system and provide advisory services.

On 25 and 26 April 2017, the IRZ organised a conference in Rabat on the “Independence of the Judiciary”, in cooperation with the Moroccan Ministry of Justice. The event was part of a project financed by the German Foreign Office (Transformation partnerships with North Africa/the Middle East) and was held at the Moroccan law academy (Institut Supérieur de la Magistrature) in Rabat.

The subject of judicial independence is an elementary component of the reform agenda for the Moroccan justice system and is a priority for the progress of judicial reform. The conference therefore attracted some high-ranking participants. It was opened by the Minister of Justice for Morocco, Mohamed Aoujar, and subsequently led by the President of the Moroccan Court of Cassation, the Public Prosecutor General of Morocco and other high-ranking representatives of the Moroccan courts.

In Morocco, it was only last summer, as part of the current judicial reform process, that a High Judicial Council was set up as an independent committee of judicial autonomy. The High Judicial Council is a firm part of the Moroccan constitution but has only just started its activity as a new institution in Morocco's justice system. Therefore, any kind of support in terms of guaranteeing the independence of the judiciary is very welcome, especially from the German side.

During both days of the conference, the experts participating on behalf of the IRZ, former Public Prosecutor General Walter Selter and Dr. Fabian Krapoth, Director of the Regional Court of Waldbröl, maintained an intense exchange of information with their Moroccan colleagues on various aspects of the independence of the judiciary, using German experience as an example.

The focus of the expert lectures and discussions was on the foundations for guaranteeing judicial independence and on the practical implementation of the required mechanisms and structures (organisation of jurisdiction, self-governing and co-determination bodies). These structures in particular have once again been revised, in the areas of the judiciary and prosecution respectively.

The Moroccan participants were especially interested in the areas of public service law (in particular punishment for breaches of official duties, public liability) and professional ethics. In view of the fruitful exchange between colleagues on both sides, it would seem to be very useful to continue working on individual aspects concerning the “independence of the judiciary”. In fact, the Minister of Justice and the Public Prosecutor General emphasised the importance of working with the IRZ on several occasions during the event and expressed their wishes for this cooperation to intensify and continue.

Conference on the Hague Conventions in Morocco 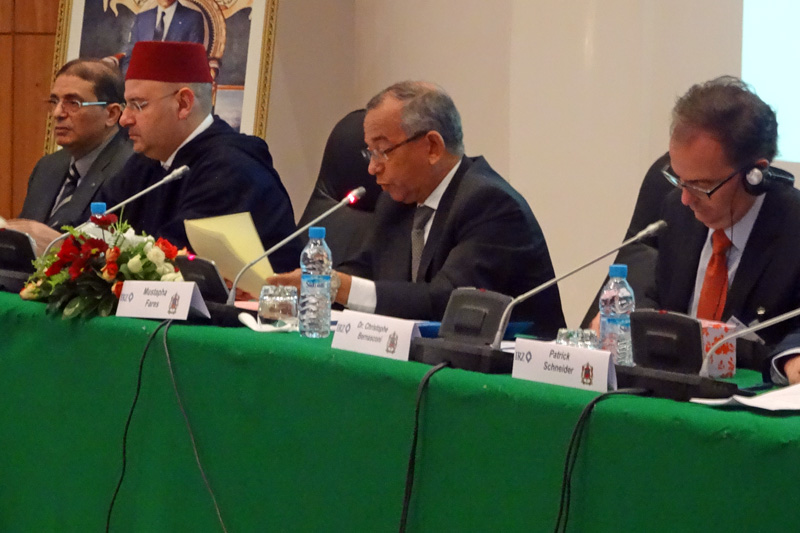 The conference in Rabat was attended by delegations from seven Arab states: Bahrain, Egypt, Jordan, Morocco, Mauretania and Saudi Arabia as well as Tunisia.

These conferences are intended to convey the advantages of regional and international cooperation within the Hague Conventions to Arab states and to discuss issues and concerns in a confidential atmosphere. The event was the second event organised by the IRZ in Morocco; it is planned to continue cooperation in the coming years.