The internship programmes and multilateral events such as conferences and summer schools are important parts of the IRZ‘s work. Initiated shortly after the IRZ was established, the internship programmes are viewed as particularly successful in this regard. For 25 years, German-speaking professionals from the IRZ partner states have completed programmes lasting several weeks to obtain insight into the everyday working routines in German law firms, courts, public prosecutor‘s offices and notary‘s offices. Not only do they acquire information about the practical workings of the judiciary in Germany, they can also share views with German and foreign colleagues on their impressions and the practical side to work in their own countries.

An internship programme for English-speaking civil and commercial judges was added to the portfolio in 2016. This approach has since been continued in the form of a practice-oriented training for English-speaking notaries, which was piloted in 2018. These programmes in English language are designed in particular for participants from non-EU countries in which German is not a common second language and where even legal professionals are unlikely to have a sufficient command of the language in order to enable an effective training period in Germany. Hence, a broader target group can benefit from these important programmes in English as transfer language. The IRZ will continue to offer these formats in view of the strong support and the extremely positive feedback from participants. In the future, the practice-oriented training programme for English-speaking notaries and the internship programme for German-speaking notaries will be held in alternate years.

Like the multilateral conferences, the purpose underlying these internship programmes is to promote technical exchange of experience between professionals in the numerous partner states of the IRZ on current issues of law that are equally relevant to all participants. The participants play an active role in the process, as they present the situation and solutions in their own legal systems in a multilateral context and, in the role of multipliers, can disseminate the strategies and solution models applied by their foreign colleagues within their own countries. Another important aspect of these projects is to establish long-term, international networks within the different professional groups.

The IRZ supported a conference by the Memorandum Group of Associations of Judges from Armenia, Estonia, Georgia, Kazakhstan, Moldova, Poland and Ukraine in 2018 as well. This year‘s event was held in the Kazakh capital of Astana and focused on the issue of social security for judges from the perspective of effective legal protection. The IRZ has good contact with most of the participating Associations of Judges within the framework of bilateral cooperation and has supported their meetings in this format since 2011. Deserving particular mention in this regard is the participation by the German Association of Judges, which is always invited to the conferences as an advisory member and whose expertise and technical contributions are highly appreciated by the other members. 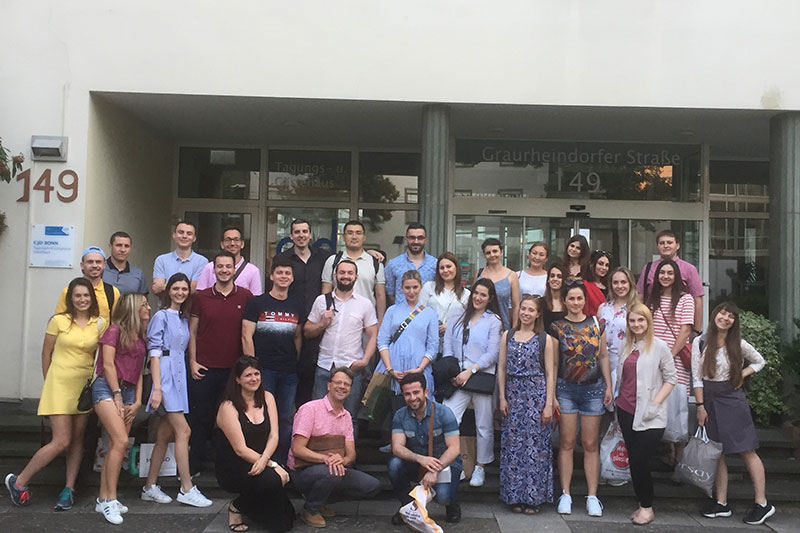 The IRZ held its eighth “IRZ Summer School on German Law“ from 8–14 July 2018 in Bonn, which was attended by participants from eleven IRZ partner states: Albania, Armenia, Azerbaijan, Bosnia and Herzegovina, Georgia, Kazakhstan, Kosovo, Russia, Serbia, Tunisia and Ukraine. Kazakhstan and Tunisia were represented at the event for the first time. The summer school was inaugurated in 2011 as an addition to the supplementary studies for an introduction to German law at the Ivan Franco National University of Lviv (Western Ukraine). Now it regularly brings together participants from numerous partner states of the IRZ and continues to enjoy substantial demand. Very good German skills are a prerequisite for attendance.

In addition, the IRZ Summer School also included a visit to trials at a civil and a criminal chamber at the District Court of Bonn, as well as discussions at the University of Bonn, during which participants were able to learn more about study opportunities for foreign students and postgraduates. In view of the very positive response, the IRZ Summer School will be offered in the coming years as well, in order to continue addressing and promoting young legal professionals in the IRZ partner states. 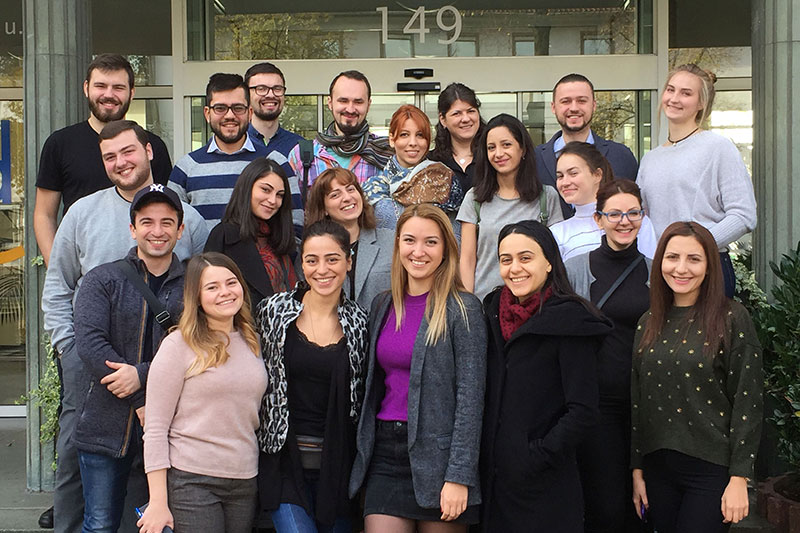 Graduates of the IRZ Autumn Academy in Bonn

In October 2018, the IRZ was able to organise the first IRZ Autumn Academy thanks to support from the Federal Foreign Office to build on the successful summer schools. Partnering with the Ivan Franco National University of Lviv (Western Ukraine), 21 students and professional entrants from the countries of the Eastern Partnership (Armenia, Azerbaijan, Belarus, Georgia, Moldova, Ukraine) and Russia were invited to the event in Bonn. Most of the participants were alumni of earlier IRZ Summer Schools and already possessed a basic grasp of German law, in addition to their excellent German skills.

The programme at the Academy was spread over seven working days and included issues of European and international law (international private law, ECHR procedures, basic principles of EU law), as well as a broad variety of aspects within German civil law, for instance trade and partnership law, law of public and private entities and insolvency law. Relatively recent legal areas such as IT criminal law or renewable energies law were also addressed. The topics were presented by speakers from academia, the Bar and the judiciary, ensuring significant practicality of the lectures. Visits to the Federal Cartel Office and the DHL headquarters in Bonn rounded off the programme.

The highly motivated participants contributed actively to the technical programme and demonstrated with their interested questions that they were able to follow complex issues, both in terms of the content and the language. So it was hardly surprising when all of them successfully completed the final test in German. Above all, the young lawyers were extremely open to engaging with their colleagues from other countries. They quickly established amiable, international contacts that they can continue in a Facebook group and once again confirmed that national differences play only a subordinate role within an inspiring technical context. 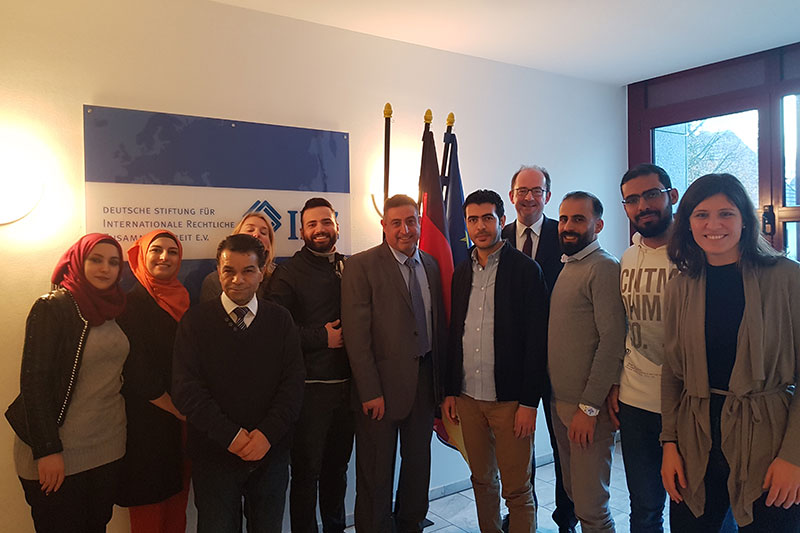 Participants at the seminar “Introduction to German law for refugees“

Cooperating with the Federal Ministry of Justice and Consumer Protection (BMJV), the IRZ held a third successful seminar for Arabic-speaking refugees with a legal background on the subject of “Introduction to German Law“. The two-day event was held in Bonn from 10–11 December 2018.

By organising this event, the IRZ is seeking to make a contribution to the integration of lawyers among the Arabic-speaking refugees. The eight participants from Syria were legal professionals who had graduated from bachelor or master degree programmes, as well as one female attorney and two male attorneys. They received an introduction into the basics of German constitutional law, court structure in Germany and fundamental principles of general civil and criminal law. Aspects of social and asylum law were also discussed. In communicating the content, a focus was placed on illustrative case examples with relevance to the everyday lives of the refugees. This led to lively exchanges and many interested questions. The legal professionals from Syria were frequently able to discover parallels between the German and Syrian legal systems.

Consecutive interpreting was organised for the event, which was received by the participants very positively. It also allowed them to review and expand their language skills. Although the prospects of becoming established in a legal profession in Germany are limited for refugees, this project nevertheless offers them other opportunities. By attending the event, the participants acquired a better grasp of how legal issues relate to their everyday lives in Germany and may be able to act as mediators with German authorities for members of their personal circles. Moreover, the IRZ makes efforts to organise internship positions in law firms for selected participants in cooperation with the German Bar Association.

The following programmes were held in 2018 in cooperation with, and supported by, the respective professional chambers and associations, as well as the Federal state justice administrations: 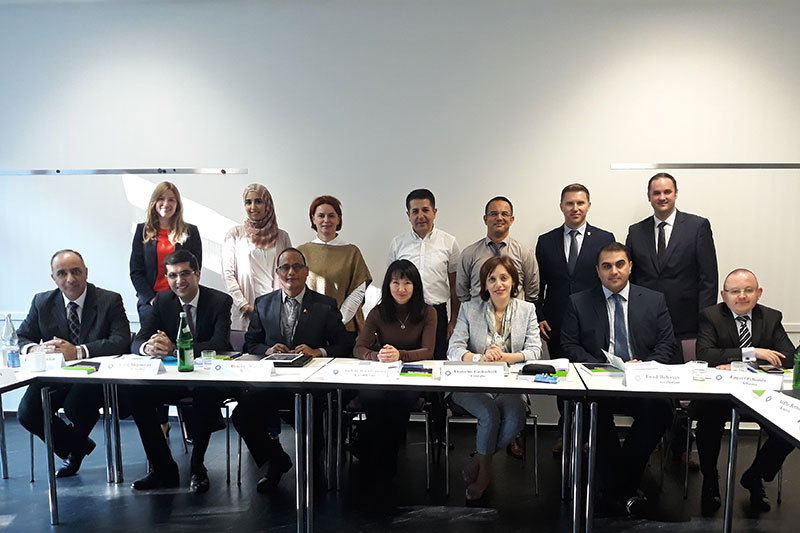 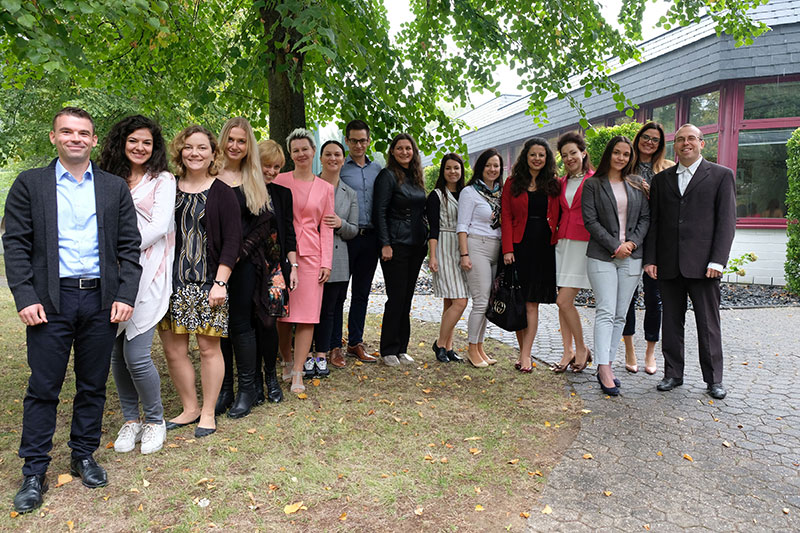 Interns from the advocacy 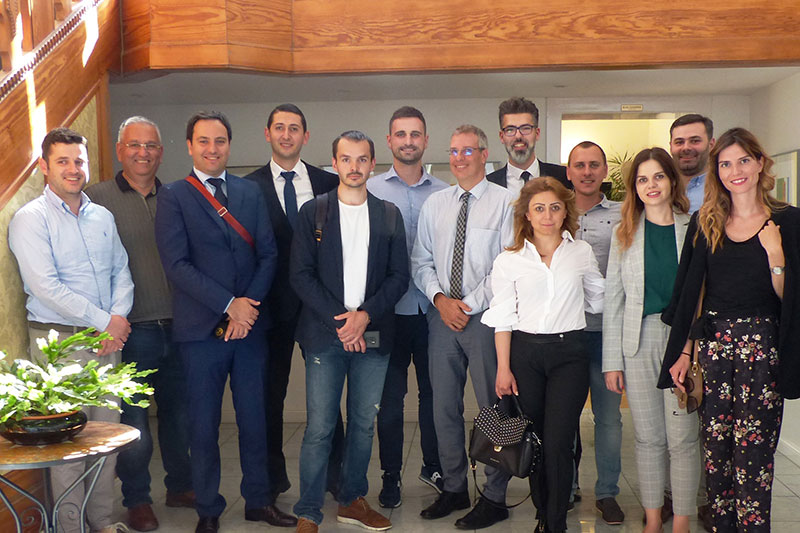 Visit by the participants of the practiceoriented training course for English-speaking notaries and junior notaries in the notaries‘ office Dr. Rabl and Dr. Gassen 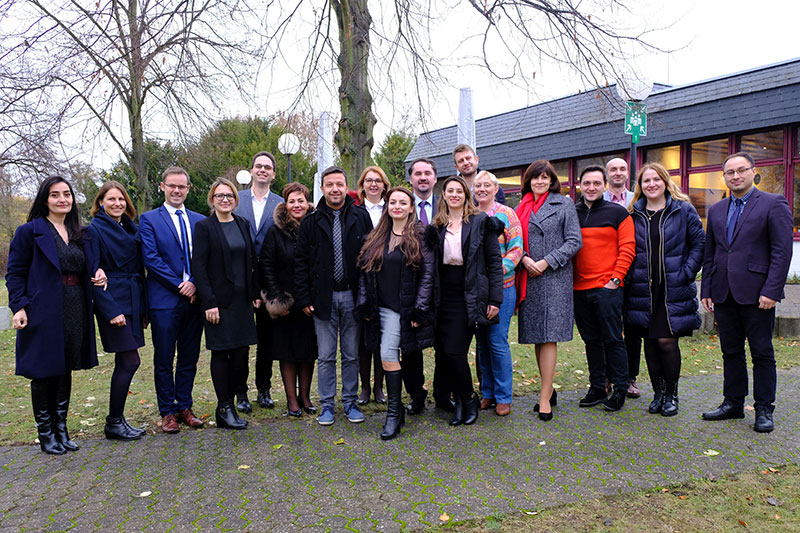 Participants of the internship programme for judges and public prosecutors