On 16 May 2017, the IRZ celebrated its 25th anniversary at a ceremony held at the German Federal Ministry of Justice and Consumer Protection (BMJV). Around 250 people from Germany and abroad took part in the celebrations, by invitation of Minister Heiko Maas.

Christian Lange, parliamentary Secretary of State at the German Federal Ministry of Justice and Consumer Protection and Vice-President of the IRZ, opened the celebrations in the courtyard of the Ministry. During his speech, Christian Lange emphasised the global importance of law and justice and noted that freedom, peace and prosperity can only exist in a state governed by the rule of law. This is precisely where the tasks of the IRZ lie – in supporting the development of democratic states under the rule of law – and has become active in almost 30 states since its foundation in 1992.

During his welcome address, the President of the IRZ, Dr. Jörg Freiherr von Fürstenwerth, outlined the tasks and challenges involved in international legal cooperation, which the IRZ has had to face and overcome, against the backdrop of historical events in the year the IRZ was founded. Afterwards, the Managing Director of the IRZ, Veronika Keller-Engels, talked about the many years of intensive and trusting cooperation with the partner states, in which many representatives of IRZ member associations and other experts have played an important role. She thanked all the experts for their involvement and all members and supporters for their constant support for the work of the IRZ.

In his subsequent keynote speech, Christoph Flügge, a judge at the International Criminal Tribunal for the former Yugoslavia in The Hague, outlined the fundamental considerations in the struggle for the state governed by the rule of law amongst IRZ partner states and elaborated with details of his personal experience gained during many years of involvement in international legal cooperation. Christoph Flügge painted a very vivid picture of the work of the IRZ and of what has been achieved so far and, at the same time, pointed out the new tasks and challenges in new partner regions.

On 3 and 4 November 2016, the association of judges of Moldova and the IRZ once more organised the annual conference of the so-called “Memorandum Group” founded some years ago within the International Association of Judges (IAJ). The “Memorandum Group” is a group of associations of judges, mainly from post-Soviet member states, which meets once a year, if possible, to discuss specific legal and professional topics for these countries.

The IRZ has been promoting this professional exchange right from the start and has supported individual members at a national level providing legal advice on many of these topics, or the topics have been discussed at a bilateral level after the annual meetings, thus making use of diverse synergies. These conferences offer above all the opportunity to discuss and compare different solution approaches against a comparable historical and cultural legal background and similar political conditions. Thus they can contribute the best possible approaches for reform to the respective reform discussions.

The focus has been on judicial independence, disciplinary law and appraisals as well as for example the law on legal remedies or means to expedite proceedings to relieve the judiciary. The German Association of Judges (German abbreviation DRB) has an advisory status in the above-mentioned “Memorandum Group”, which means that German expertise and German experiences can be directly integrated.

This year’s conference at the Supreme Court in Chisinau dealt with the question how uniform case law can be ensured. Of particular interest for the participants from the Republic of Moldova, Ukraine, Armenia, Georgia and Kazakhstan was the conflict between the interest in a uniform case law and judicial independence in the face of frequent and often poorly structured legislative changes. It was also discussed whether the “advisory statements” or “recommendations” given outside the regular stages of appeal are binding for the courts of first instance.

Next year, the IRZ will follow up on the topics of this conference at a bilateral level with the association of judges of Ukraine. The next conference of the “Memorandum Group” will presumably deal with appraisal issues.

5th International Conference of the Parliamentary Committees on Legal Affairs on “Politics, Business and Human Rights” 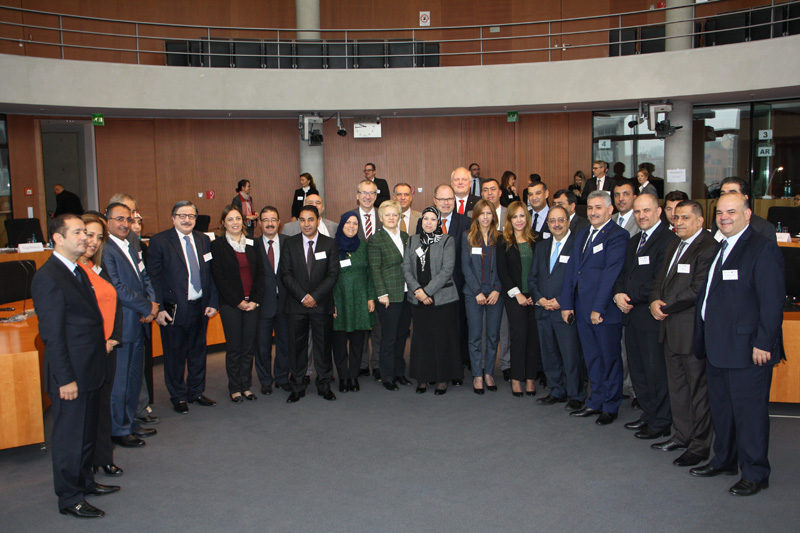 Organised jointly by the IRZ, the German Bundestag Committee on Legal Affairs and Consumer Protection and the German Federal Ministry of Justice and Consumer Protection (BMJV), the 5th International Conference of the Parliamentary Committees on Legal Affairs was held in the German Bundestag on 24 and 25 October 2016. The organisers welcomed 30 guests from Jordan, Tunisia, Morocco, Lebanon, Iraq, Iran and Algeria to the event.

The focus of the event was on issues concerning the protection and respect of human rights in politics and business, in which the civil society and non-governmental organisations also play an important role. Based on the United Nations guiding principles on business and human rights, with the three main focus points on the state duty to provide protection, the responsibility of businesses and access to remedies and the resulting 31 guiding principles, national efforts to implement these principles were presented and discussed. The conference was opened by the parliamentary Secretary of State at the BMJV, Christian Lange, MdB, the President of the German Bundestag Committee on Legal Affairs and Consumer Protection, Renate Künast, MdB, and the IRZ Managing Director, Veronika Keller-Engels. Following on from this, Ulrich Kelber, MdB, parliamentary Secretary of State at the BMJV, and Yasmin Fahimi, Secretary of State at the German Federal Ministry of Labour and Social Affairs, introduced the German national sustainability strategy and the national action plan for business and human rights on behalf of the German federal government. Four panels dealt with issues concerning corporate social responsibility and the global challenge of fighting corruption as aspects that are part of protecting human rights.

In this context, delegates explained the approaches to finding solutions that are already in place or are under discussion in their respective countries, followed by lively and controversial discussions with responses from delegates who are Members of the Bundestag, Volker Beck, Dr. Hendrik Hoppenstedt and Harald Petzold. From the world of business, the Chief Counsel at the Association of German Chambers of Commerce and Industry (DIHK), Prof. Dr. Stephan Wernicke, Luise Seyfferth from Allianz SE and Dr. Christoph Klahold from thyssenkrupp AG, explained the efforts that have been made and are still being made by German businesses at a national and international level in order to ensure high standards of corporate social responsibility in Germany and worldwide. In this respect, clear rules, legal certainty and international cooperation to achieve consistent standards are in the interest of businesses. These discussions with foreign parliamentarians made clear the different approaches regarding, for example, a normative commitment or voluntary-based efforts to protect human rights in the world of business, which was also explained by Cornelia Heydenreich from Germanwatch. Prof. Dr. Hans-Jürgen Hellwig from the German Bar Association (Deutscher Anwaltverein) then elaborated on the significance of the UN guiding principles and of national efforts to implement legal advice from the legal profession. There followed a keynote by the lawyer Wolfgang Schaupensteiner on the meaning of corruption and on its effects on the state and society and then Dr. Angela Reitmaier from Transparency International Germany and delegates from the partner countries gave their own opinions.

During speeches by guests from other countries, it became clear that, due to terrorist attacks, political unrest, the acceptance of refugees, the prevalence of Islam and the colonial legacy in their respective home countries, international standards with regard to protecting human rights have not yet been achieved and further, some quite considerable efforts are still required. The parliamentarians reported on their reforms in the field of human rights and the sometimes quite poor implementation of the appropriate provisions because of insufficient institutional anchoring or an absence of sanctions.

The four panels were moderated by the lawyer, Dr. Sebastian Cording, a member of the Human Rights committee of the German Federal Bar (Bundesrechtsanwaltskammer), Dr. Almut Wittling-Vogel, the German government’s Commissioner for Human Rights issues at the BMJV, Metin Hakverdi, MdB and Harald Petzold, MdB.

Subsequently, the parliamentarians attending the conference agreed that the kind of exchange of thoughts made possible by this conference is worthwhile and that, ideally, the objective should be for a network of parliaments to be set up, in order to help efforts to improve the protection of human rights become a reality at an international level as well.