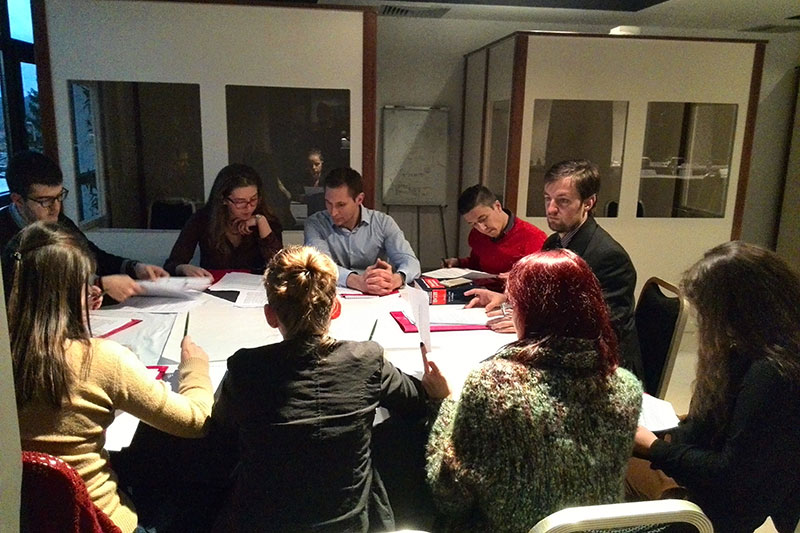 The Stabilisation and Association Agreement between Macedonia and the EU has been in force since April 2004. The country has had the status of an accession candidate since December 2005. The European Commission's Progress Reports, which have been increasingly critical in recent years, continually call to step up the efforts concerning the rule of law and for improvements to be made to the quality of the judiciary. Moreover, various domestic policy crises and conflicts were observed this year. The technical starting situation is typified by restricted staffing capacities in the judicial institutions and a tendency towards hybrid laws combining elements of continental European and Anglo-American law.

The IRZ commenced its activities in Macedonia in 2000 in the context of the Stability Pact, and considerably increased them in the second half of the decade. Regular joint events have for instance taken place since 2007, the year in which the Academy for Judges and Public Prosecutors was established.

The IRZ also expanded the target group of its activities in Macedonia and their sustainability by means of legal publications in the country's language. After the series of books entitled "Contributions from the work of the IRZ in Macedonia" had become established, the IRZ launched a further regular series of publications in 2012 through the publication of a Macedonian European law journal. Following on from these activities, it started in 2013 to translate material from the ECtHR into Macedonian in cooperation with the "Case-Law Information and Publications Division" of the European Court of Human Rights, and to disseminate it in book form and on the Internet. These activities were supplemented this year by the establishment of a six-monthly information service on the Strasbourg case-law in Macedonian and Albanian, which is published together with the Macedonian Government's representative to the ECtHR.

The IRZ's partners in Macedonia include the Academy for Judges and Public Prosecutors, the Government's representative to the ECtHR, the Chamber of Notaries, as well as researchers from the Faculty of Law in Skopje.

It is particularly a matter of improving the quality of the application of the law in Macedonia, and of ensuring a uniform orientation towards continental European law, something which would also be in line with the Macedonian tradition. The IRZ is hence concentrating on supporting the application of the law by means of further training events and publications. Further important topics are human rights and their enforceability, as well as maintaining contacts with young, German-speaking lawyers, who constitute a major target group as potential future multipliers. When it comes to suitable topics, the IRZ also cooperates with other German organisations on the spot. Furthermore, it addresses young lawyers, including through events on German and European law.

The IRZ will continue cooperating with the Macedonian Academy for Judges and Public Prosecutors in basic and further training in various legal fields in 2016, and will organise further seminars on various fields of law with particular practical significance. The IRZ will also continue its series of judicial publications. The ECHR will furthermore continue to be significant as a topic within the project work in Macedonia. Finally, the IRZ is planning to work together more intensively with the non-governmental sector.