Macedonian publication with prominent authors on the consequences of Brexit

The latest edition of the Macedonian journal “Европско право“ (European law, or EP for short) on the consequences of Brexit is hot off the press. For six years now, the IRZ has been publishing this journal in cooperation with legal experts from the Faculty of Law in Skopje.

The latest issue of this journal is a single-topic edition dealing with the history and the possible impacts of Brexit. This topic is covered by authors from various countries.

A large part of this edition consists of articles already published in foreign journals and printed as translations, which provide an insight into various questions discussed abroad and the different opinions held there, also to Macedonian readers without foreign language skills.

The broad range of articles is owed to the support of many individuals, editors of other publications and their publishers. Several of the translated papers are taken from the journal “Südosteuropa“ (Southeast Europe), which is published by the Institute for East and Southeast European Studies. Another article was first published in German in the journal "notar" issued by the German Association of Notaries (DNotV) and one paper, also in German, in "Recht der internationalen Wirtschaft“ (International Business Law, RIW).

Prominent authors include, amongst others:

In addition, various experts for Southeast Europe have made a contribution to the publication: Andrea Despot, Hannes Granditis, Wolfgang Höpke, Dušan Relić, Gabriella Schubert and Sevasti Trubeta. John Breilly gives an account of the situation from a British point of view.

This look at the foreign legal press is preceded by an introductory article from a Macedonian point of view by Dr. Julija Brsakoska Bazerkoska. The picture is rounded off by a report covering the event “Southeast Europe between expectation and disenchantment” organised by the Southeast Europe Association.

The printed version of EP is distributed via the IRZ’s wide network in Macedonia which has developed over more than a decade. To increase its reach and sustainability, this publication of the IRZ’s Southeast Europe section has its own website.

It provides the EP journal, but also the different individual articles and abstracts in German for download. 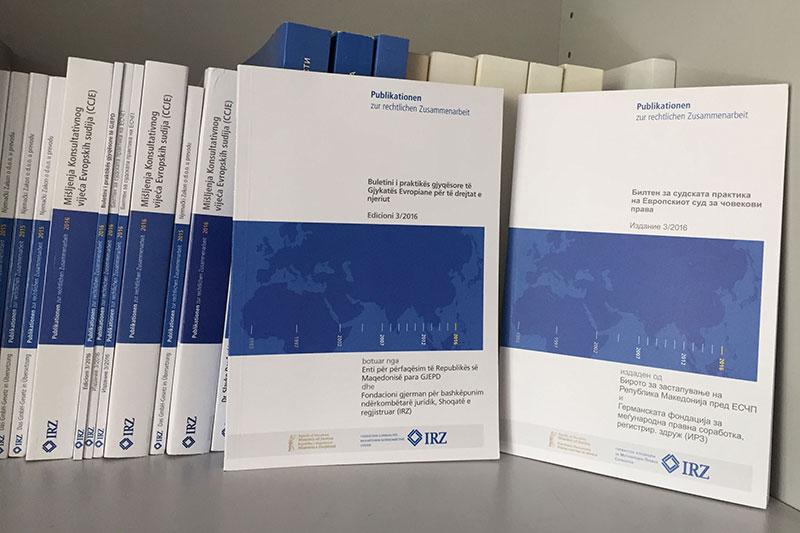 The latest edition of the newsletter on case law at the European Court of Human Rights (ECHR), published by the IRZ together with the Macedonian government agent at the Strasbourg Court, is hot off the press.

This newsletter is specifically targeted at fulfilling the requirements of Macedonian legal practice. Therefore, in addition to summaries of the decisions taken against Macedonia, it also includes information about judgements against other countries on topics that are also highly significant in Macedonia. As well as in Macedonian, the newsletter is also published in the language of the Albanian minority population.

The newsletter is distributed in print format by the Macedonian government agent at the ECHR, as project partner, so that all Macedonian judges receive the newsletter in their own mother tongue.

In its HUDOC Internet database, the ECHR also supplies summaries of the judgements in both languages for download, with specific reference to the IRZ.

This means that the content of the newsletter is also accessible to people who keep themselves informed on the ECHR website in Macedonian or Albanian.

As the newsletter is already in its third year, it has become very well known amongst Macedonian law professionals.

The ECHR has already emphasised the cooperation with the IRZ in the "Information Note on the Court's case-law/ Note d'information sur la jurisprudence de la Cour” in an extensive report, citing it as a good example of joint activities. 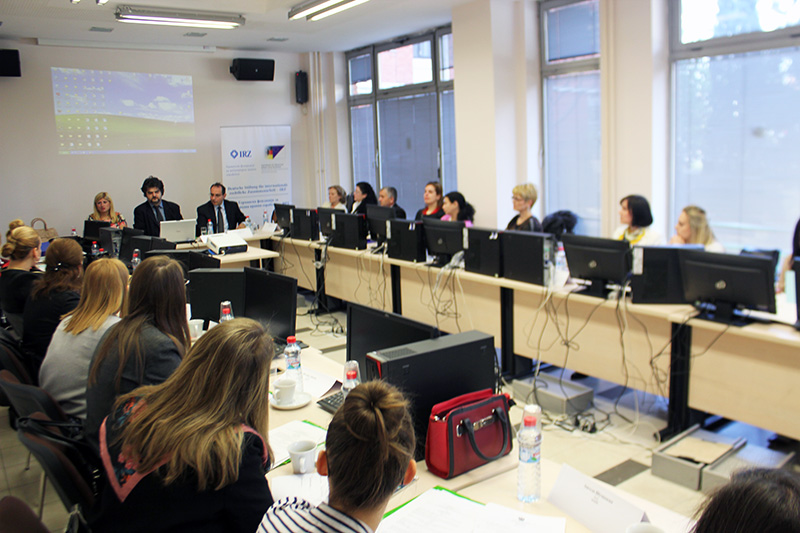 A view of the seminar room

A seminar on “Responsibilities and applicable law according to the new act on Private International Law”, which was organised jointly by the IRZ and the Macedonian Academy of Judges and Public Prosecutors, was held in Skopje on 27 April 2017.

Attending the seminar were judges from the civil law departments of various courts, lawyers and representatives of the Young Lawyers Association. Several case examples were presented at the event, illustrating some of the practical applications of the partly new regulations of the Macedonian law.

The seminar was organised on the occasion of the adoption of the new Macedonian PIL act. This complies with consistent EU harmonisation and convergence with international standards, including the Hague Convention. The new law replaces previous solutions dating from the socialist era.