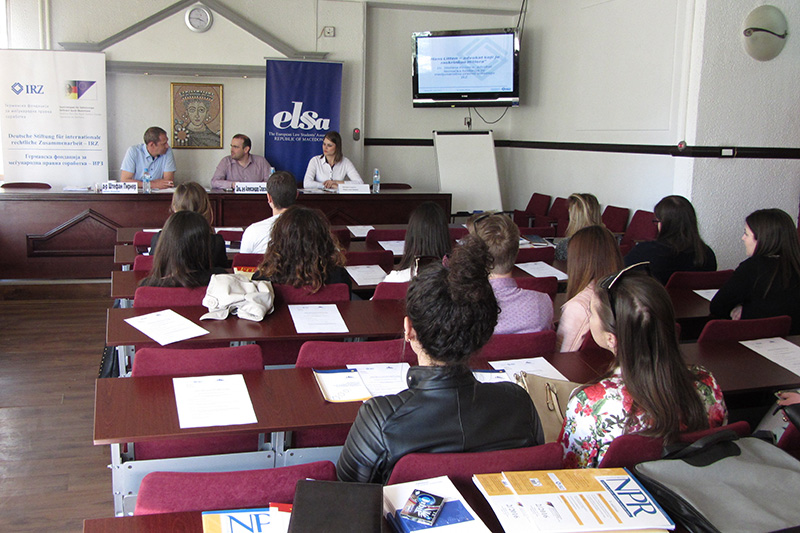 The persecution of Jewish lawyers during the National Socialist era in Germany, and particularly the fate of Hans Litten, were the subjects of a lecture held on 28 March 2017 by the IRZ, in partnership with the Skopje section of the European Law Students Association (EL§A).

The event was opened by Miroslava Dzadzeva, President of the Skopje EL§A group and by the lecturer Dr. Aleksandar Spasov. Following the lecture, during which excerpts from a BBC TV documentary about Hans Litten were also shown, a lively discussion took place.

This event follows on from lectures on the abuse of civil law to discriminate against Jews during the National Socialist era, which have taken place over the past two years at various faculties in south-eastern European partner states of the IRZ and are due to continue in Mostar, Bosnia and Herzegovina, and in Kragujevac, Serbia. Events have already taken place in the following locations:

At these events, the general mechanisms used to abuse the law in authoritarian systems and the rocky road taken by Germany to overcome its own legal history are also discussed. These topics should also be part of the corresponding discussions in the south-eastern European partner states. This series of lectures is linked with other IRZ activities on “Coming to terms with the past”.

Exchange of experience on consumer protection between Macedonia and Serbia

On 3 February 2017, this year's first IRZ event took place in Skopje/Macedonia. The seminar on ”Consumer protection under the consumer protection law and its relation to other laws” was organised by the IRZ in partnership with the Academy for Judges and Public Prosecutors.

This wide range of participants and the different backgrounds of the speakers led to lively discussions and an extensive exchange of experience.

The seminar covered the recent integration of Directive 2011/83/EU of the European Parliament and of the Council of 25 October 2011 on consumer rights into Macedonian consumer protection law.

The Handbook on the European data protection law is highly topical because of the widespread tapping of about half a million phone calls in Macedonia. Consequently, there has been a great deal of media interest. The academic portal Akademik and the press agency MIA were amongst those to report on the event.

The event was opened with a welcome speech by the German Ambassador's permanent representative, Hans-Helge Sander. The main speaker was the Macedonian judge at the Strasbourg Court, Dr. Mirijana Lazarova Trajkovska. All the participants emphasised the value of the publication for practical use.

The IRZ hosted the event together with its long-term project partners in Macedonia – the ombudsman, the Academy of Judges and Public Prosecutors, the Macedonian representative at the ECHR and the bar association.

The Macedonian translation of the Handbook on European data protection law is also available to download from the website of the Strasbourg Court: Прирачник за европското законодавство за заштита на податоците.

The event also represented an opportunity to introduce the latest edition of the journal published by the IRZ on European law "Evropsko Pravo" (EP), which has already been running for five years, which also deals with common ECHR topics.