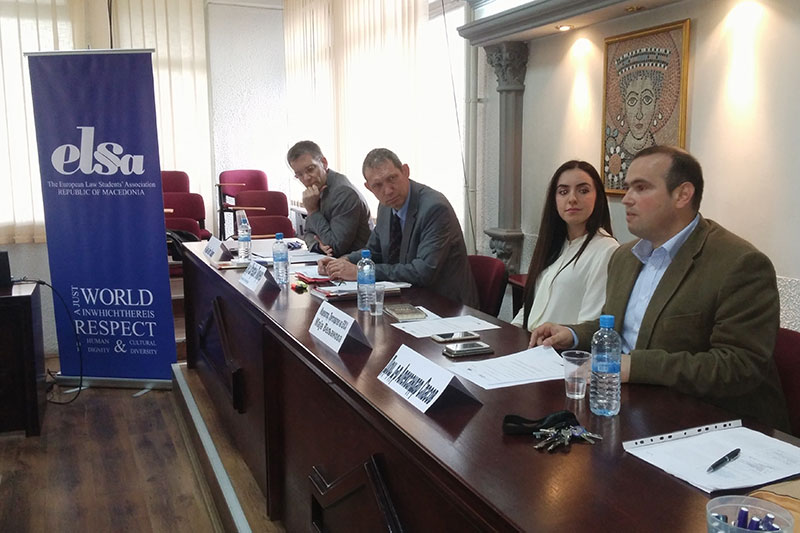 On 6 May 2016, an event was held on the abuse of civil law during the National Socialist era in Germany. The IRZ organised a lecture on this subject in partnership with the Skopje section of the European Law Students Association (EL§A). In spite of the timing of the event, which took place late on a Friday afternoon, more than fifty students attended and stayed on afterwards to discuss the topic in detail.

The event was opened by the President of EL§A Skopje, Maja Veljanova, and lecturer Dr. Aleksandar Spasov, who is a tutor for the EL§A group at the university. The German Ambassador's permanent representative, Hans-Helge Sander, delivered an opening speech in Macedonian.

Practical event on the ECHR in Macedonia 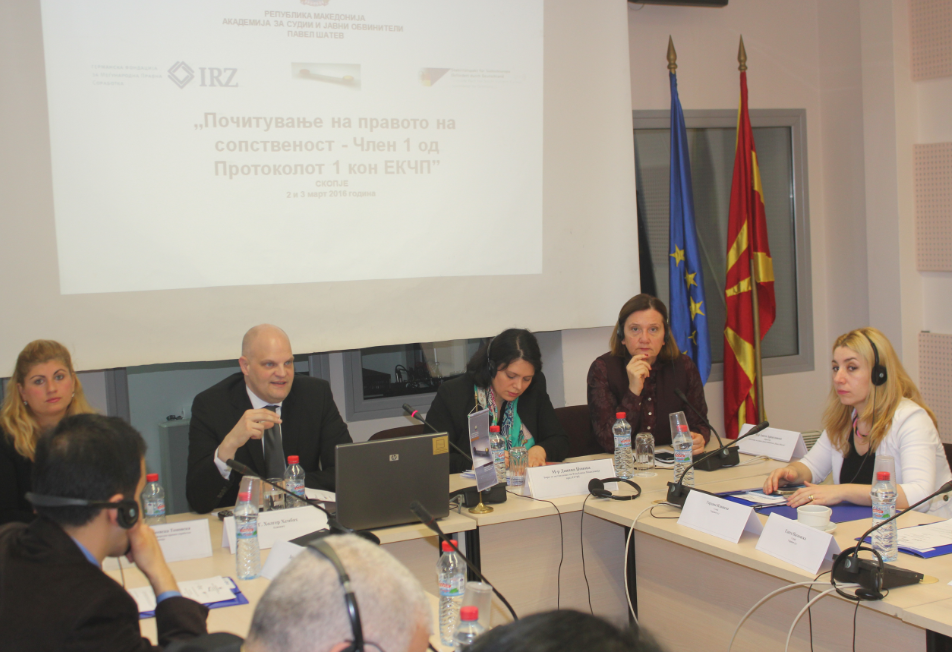 Lawyer Holger Hembach, Danica Djonova and the Director of the Academy, judge Aneta Arnaudovska (on the podium, from left to right)

On 2 and 3 March 2016, the IRZ together with its long-term partner, the Macedonian Academy of Judges and Public Prosecutors, Pavel Šatev, organised a seminar on the "Significance of Article 1 of the First Additional Protocol to the European Convention on Human Rights."

The speakers at the event were the German lawyer Holger Hembach, who worked for many years for the OSCE in Macedonia, and Danica Djonova from the office representing the Macedonian government at the European Court of Human Rights. During the event, which was opened by the Director of the Academy, judge Aneta Arnaudovska, numerous cases from the relevant case law at the Strasbourg Court were presented.

The lectures also dealt with the practical significance of the topic. This has come about as a result of the fact that between 1959 and 2005, about 13 per cent of the successful complaints brought before the Strasbourg Court involved a violation of Article 1 of the First Additional Protocol. The further presentation focussed in particular on the justification and appropriateness of infringements of property rights.

The subject of human rights represents a particular focus of IRZ activities in Macedonia. In this respect, the IRZ not only organises training and further education events, it also publishes various relevant publications in Macedonian as well as in the language of the Albanian minority population. To achieve this, the IRZ works with the Case Law Information and Publications Division of the ECHR and also with the office representing the Macedonian government at the Strasbourg Court.

The first "Introduction to German law" block seminar took place in Macedonia over the weekend of 20 to 22 November. It was organised by the IRZ together with the Faculty of Law in Skopje. Since very few law students in Macedonia speak German, the seminar was held in the Macedonian and Serbo-Croatian languages, unlike similar events organised by the IRZ in Bosnia and Herzegovina and Serbia, which take place in German. Serbo-Croatian is the lingua franca used and understood in Macedonia for communicating with neighbouring countries. It was important for all those attending the conference to be able to hold direct discussions without interpreters. This also meant that no important information was lost due to seminars being held in English, it often being the case that no suitable specialist vocabulary exists in English for continental law institutions.

The IRZ was able to appoint speakers with extensive training in German law, including Prof. Zlatan Meskic, whose qualifications include a PhD from Vienna in European consumer protection, and Prof. Slavko Djordjevic, who has completed various studies in Germany, including at the Max Planck Institute in Hamburg and the Faculty of Law in Passau. The third speaker, also German-speaking and trained in German law, was Dr. Alexander Spasov, a lecturer at the Faculty of Law in Skopje, who was also responsible for the organisation on behalf of the faculty as a project partner.

Thanks to their own training in the law of one of Yugoslavia's successor states, the speakers were also able to point out the differences between the law in the participants' home country and German law in a way that was targeted towards the participants.

During the event, extensive use was made of interactive working techniques and the case method. Topics included consumer protection and aspects of law that are relevant to the current economic situation, such as transfers by way of securities.

The 20 participants, who were decided by a selection process because of the huge amount of interest, worked very hard and expressed the wish for further activities in this field.

The IRZ promotes the study of German law in Southeast Europe in many different ways. Young law students in particular are addressed, in order to form a lasting basis for German law as a "law of orientation" in the future development of the respective national laws.