New newsletter on the ECtHR in Macedonian and Albanian 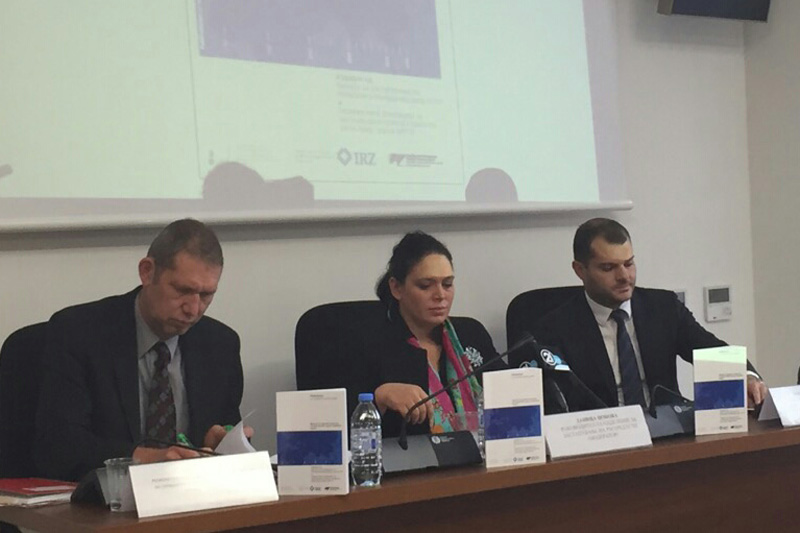 Contributors of the conference were: Dr. Stefan Pürner, IRZ; Danica Djonova, moderator, Office of the Government Representative; Kosta Bogdanov, Macedonian Government Agent before the Strasbourg Court (from left to right)

One of the IRZ's main activities in Southeast Europe is to disseminate information about the ECtHR case law. The IRZ cooperates closely with the Case Law Information and Publications Division / Division des publications et de l'information sur la jurisprudence of the Strasbourg Court, but also with national bodies.

The first joint newsletter of the Office of the Macedonian Government Agent before the ECtHR and the IRZ was presented in Skopje on 20 October at a well-attended press conference at the Ministry of Justice.

The newsletter not only contains judgements passed against Macedonia, but also other decisions about topics relevant for the Macedonian judiciary and Macedonian authorities.

The newsletter "closes a gap in Macedonian legal literature", as Agent Kosta Bogdanov put it, which is also shown by the great interest of the media at the press conference. The presentation of the newsletter was also covered by newspapers and Internet portals such as www.akademik.mk besides several TV and radio stations. All media unanimously emphasized the great importance of the Strasbourg Court's case law for the national courts.

Besides the media the press conference was attended by many court presidents and representatives of other legal organisations.

As previously reported in this context several times, the team of the Southeast Europe project area at the IRZ has for many years worked closely with the European Court of Human Rights (ECHR) in Strasbourg. As part of this cooperation, the IRZ and the ECHR issue joint publications, for example on the European Convention on Human Rights (ECHR) and on the case law of the ECHR in the national languages of Southeast European countries. The IRZ also offers basic and further training events in Bosnia and Herzegovina, Macedonia, Montenegro and Serbia, with the involvement of judges from the ECHR.

In the March edition of its "Information Note on the Court's case-law/ Note d'information sur la jurisprudence de la Cour", the Court cites the work carried out in cooperation with the IRZ as a good example of joint activities. The extensive report draws particular attention to the publications already produced as a result of this cooperation with funding from the Federal Foreign Office, which are also available to download from the Court's website as PDF documents. The latest example is the Serbian edition of the handbook on European anti-discrimination laws.

The article also underlines the significance of human rights in other work carried out by the IRZ and introduces the two magazines co-published by the IRZ in Southeast Europe, "Nova Pravna Revija" ("New Legal Review, NPR for short) and "Evropsko Pravo" (European Law, EP for short), as well as the specially dedicated website for questions on anti-discrimination. Both of these magazines are funded by the Federal Foreign Office using the German contribution to the Stability Pact for Southeast Europe. The website was set up within the framework of a regional project on anti-discrimination law, which was supported by the Federal Foreign Office with funds for the promotion of human rights.

The IRZ and the European Court of Human Rights 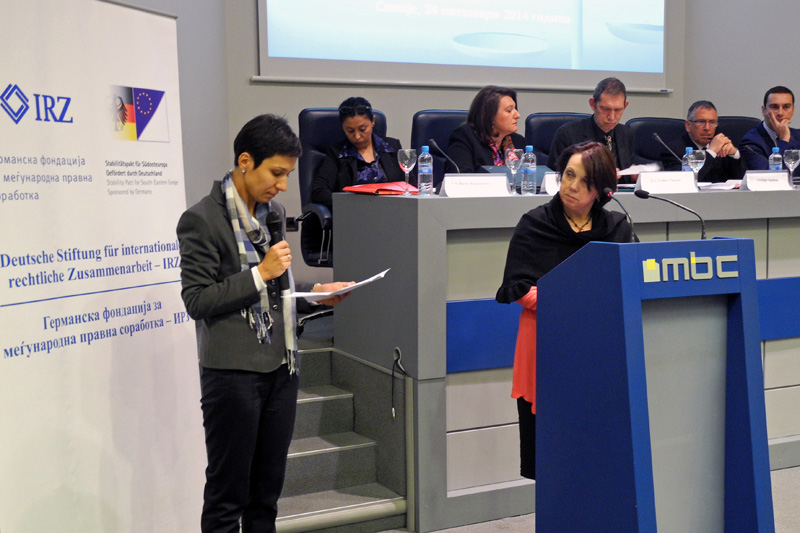 In the Western Balkans the IRZ intensively cooperates with the European Court of Human Rights (ECtHR). Within the scope of this cooperation publications about the ECHR and the case law of the ECtHR are translated into respective national languages and are presented to the public in cooperation with particular national project partners of the IRZ. In addition, the ECtHR makes those available on its homepage.

The recent relevant activity was related to the Macedonian version of the "Guide on Art. 5 ECHR" and "Research report about positive obligations under Art. 10 ECHR", drawn up by the IRZ and addressing issues, which are significant for the Macedonian legal reality. Those were presented on 24th October 2014 under considerable attention of the media. It was implemented by the IRZ in cooperation with the Ombudsman, the Chamber of Lawyers and the Academy for judges and public prosecutors. The speech of the Macedonian judge at the European Court of Human Rights Dr. Mirjana Lazarova Trajkovska on the actual topic "The case law of the European Court of Human Rights relating to freedom of expression and internet" received particular attention. It was followed by an enthusiastic discussion. The German ambassador Dr. Christine D. Althauser held a welcoming speech. Additionally, the Deputy Ombudsman Vaska Bajramovska - Mustafa, the Deputy President of the Chamber of Lawyers Boro Tasevski and the project member of the European Council Donche Boskovski spoke at the event. The presented publication complements the previous ones, published by the IRZ in Macedonian language. These are amongst others the translation of the German Code of Criminal Procedure, which comprises a preface adapted to the Macedonian legal situation and emphasizes the advantages of the Continental European rules of procedure. The magazine „Evropsko Pravo" (European Law), which is published biannually, rounds out these book publications.