Kosovo: Improving the Approximation of Laws and Coherence of the Legal Framework 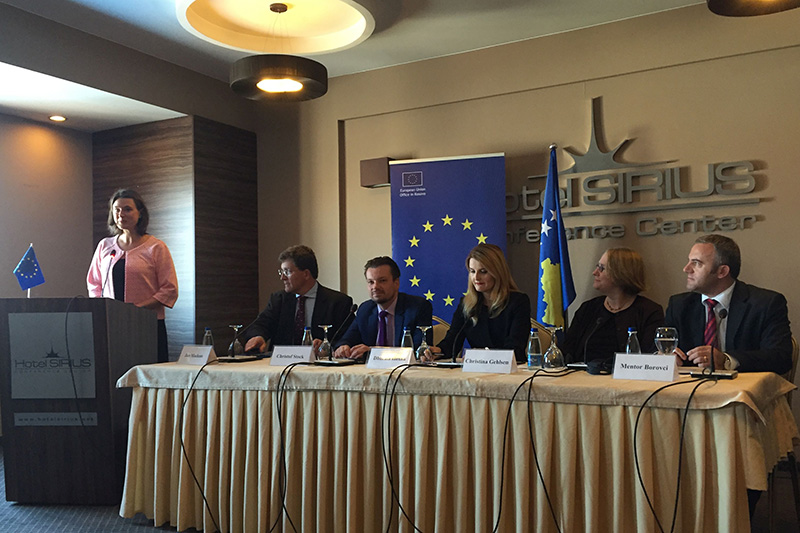 In the summer of 2016 the Twinning project “Improving the Approximation of Laws and Coherence of the Legal Framework” was successfully concluded after a period of two and a half years.

The goal of the Twinning project, conducted in continuation of the positive cooperation with the Kosovo Ministry of Justice which has been consolidated over years, was the strengthening of the rule of law and thus the associated legal security in Kosovo.

The project consisted of three components: The first component addressed the revision and consolidation of Kosovo’s legal system, the second aimed at the alignment of domestic law with the “aquis communautaire“. The goal of the third component was the development of a software program designed to support the Kosovo Ministry of Justice in these tasks.

Kosovo’s legal system is faced with a range of different challenges. On the one hand, the not sufficiently clear historically determined legal system needs to be consolidated due to the coexistence of legal instruments from different epochs – from the time of the People’s Republic of Yugoslavia, from the period of the UN administration in Kosovo, and from the time after the declaration of independence in 2008. Due to the fact that in some instances these legal instruments contradict one another, there is a great deal of legal insecurity. In addition to consolidation, Kosovo must also implement the whole of the EU Acquis in national law within a short space of time. As this entails the systematization of “old“ law and the incorporation of new statutory provisions, it is a highly complex process which has been supported by the Twinning project.

Within the framework of the Twinning project, both the principles of legal harmonisation and consolidation were taught, together with the examination of exemplary legal fields with respect to the need for change. Here the adoption of the “acquis communautaire“ is of central importance to the development of Kosovo’s legal system on its road to the EU. Consequently, Kosovo’s government has developed a National Plan for the implementation of the Acquis which specifies the related changes required in each department. This plan was supported by the Twinning project with respect to the justice department. Furthermore, consolidated versions of judicial laws were published in Kosovo for the first time.

The goals of the Twinning project were reached with respect to all three components. By linking the project to the implementation of the Stabilisation and Association Agreement, concluded between the EU and Kosovo in 2016, it was possible to provide decisive support for the entire legal harmonization process.