Croatia: Further Improvement of Institutional Capacity of all Misdemeanour Courts 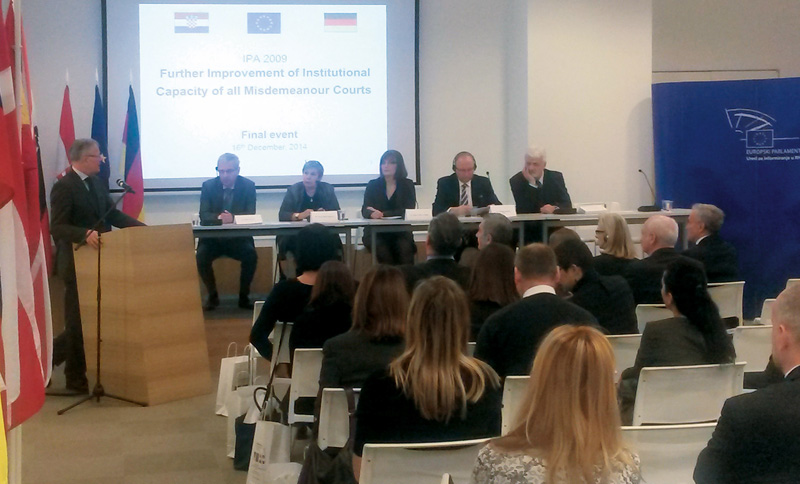 This project was a continuation of the CARDS 2004 project which IRZ completed in November 2009. It made a successful contribution towards reducing backlogs both in the misdemeanour courts and in the entire judiciary in Croatia.

The follow-up project was also successfully completed in December 2014 after a total term of 30 months. The overriding goal was to further improve the modus operandi and the management of all misdemeanour courts in Croatia. The project partners focused on the organisation of the management of the courts.

The project partners introduced new workflows in selected courts in order to optimise the misdemeanour procedure. Judges are to be freed of superfluous tasks in order to enable them to focus on their actual judicial work. The project furthermore evaluated and implemented a new concept of the legal system on misdemeanours. Instead of spreading the first-instance
jurisdiction territorially over all misdemeanour courts nationally, certain types of court procedure were focused on and centralised in individual courts. Additionally, cooperation between the core institutions in the chain of misdemeanour case-law was optimised and improved.

In order to eliminate backlogs, an office was set up at the Supreme Misdemeanours Court which monitors progress in overcoming this problem. An international standard for indicators of court performance was used as a basis for the action plan to provide orientation. Furthermore, the project partners supported the publication of the misdemeanours courts’ caselaw, thus making it more readily available for expert lawyers, as well as for the public.

White Paper on working conditions in the misdemeanour courts

The project partners developed a White Paper within the third and final component which contains an analysis of the general working conditions of all misdemeanour courts:

The drafting of the White Paper was accompanied by a cost-benefit analysis. The White Paper forms the basis for an action plan by means of which working conditions can be created which corresponds to EU standards for court buildings.