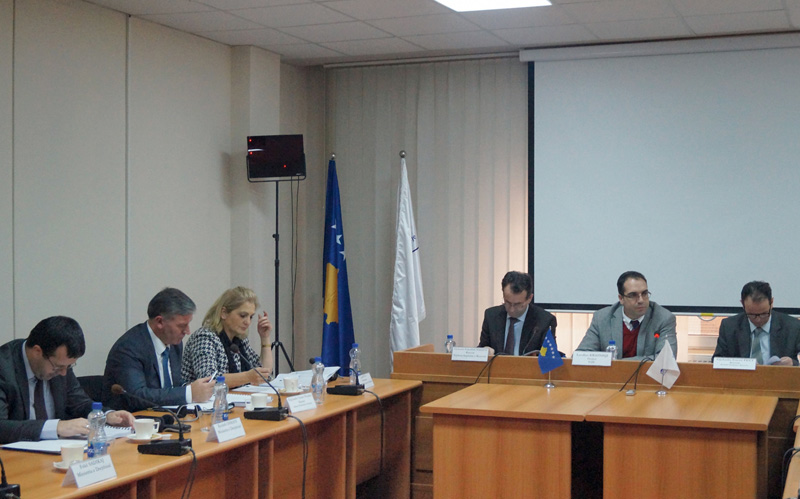 Fourth session of the Steering Committee in December 2014

The IRZ implemented the project entitled "Kosovo Further Support to Legal Education Reform" from September 2013 to November 2015, as the lead partner within the consortium, which alsoincluded GIZ and ERA, in support of the Kosovo Judicial Academy. This was a follow-up project to an EU Twinning project which had also been implemented by the IRZ until July 2012. The project, which has now been completed, had a budget of almost two million Euro and an overall term of 26 months.

The work here focused on the following components: planning and construction of a legal library in the Judicial Academy as well as the establishment of an e-library on the Internet. The procedures within the courts, and the management skills within the judiciary, the public prosecution office and the administration, were also to be improved. A further component consisted of legislative consultation and activities on legal harmonisation.

One of the most important outcomes of the project is the establishment of a legal library containing more than 1,200 legal books and journals onnew specially-equipped premises of the Judicial Academy. Furthermore, the online platform for an electronic library was established providing judicial staff all over Kosovo with electronic access to various legal databases, specialist journals, literature and e-learning modules.

Furthermore, large numbers of internships were held at European courts and public prosecution offices in Germany, the Netherlands, Portugal, Croatia and Bulgaria for Kosovo judges as well as public prosecutors. The working visits and work experience were preceded by a comprehensive needs analysis, taking account of input from the Kosovo courts.

Furthermore, basic and further training modules for judges and public prosecutors in court administration were developed and integrated into the curricula of the Judicial Academy. The project also provided an expert opinion on the draft Bill on the reform of the Judicial Academy, which had been planned for some time. The IRZ will continue the advisory activities for the Judicial Academy within a twinning project from December 2015.