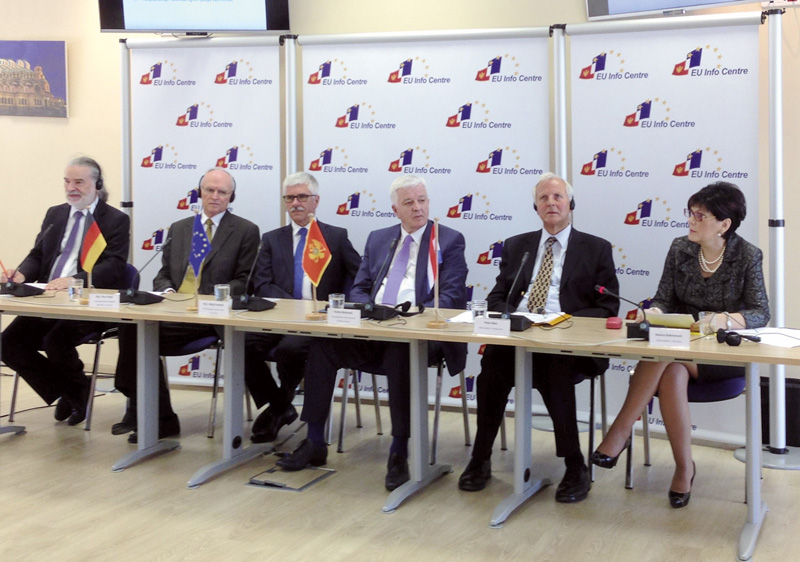 The project team with Duško Marković, Vice Prime Minister and Minister of Justice (3rd from right), and the German Ambassador in Montenegro Pius Fischer (2nd from left) at the concluding event in Podgorica

The twinning project was successfully completed as planned in July 2014. It ran for a period of eighteen months, and was managed by IRZ together with the Dutch probation service foundation Stichting Reclassering acting as a junior partner. It aimed to approximate the standards of the Montenegrin prison system to European standards and to develop alternatives to
prison sentences.

Two draft Bills were drafted within the project. It was possible to adopt one Draft Act on Alternative Sanctions while the project was still operational. A draft Bill on the Prison System is in the legislative procedure.

Montenegro did not have a probation service before the project started. There is now an office of the probation service in the Montenegrin capital of Podgorica with two trained staff members. What is more, contracts on carrying out community work, as a further alternative to a prison sentence, have been concluded with five local authorities in Montenegro. Several staff members were trained within the project to become probation officers, and more became familiar with the European Prison Rules. Further topics dealt with in the project were the methods of modern organisation structure and job descriptions. Both judges and public prosecutors became familiar with the possible alternative sanctions during the discussions that
were held

The project was substituted after the concluding event by a bilateral Dutch-Montenegrin project in which some of the experts, as well as the project assistant, are continuing to cooperate. Furthermore, the work on the new Prisons Act was also continued after the project had been completed, and both the project leader and the RTA continued to be available to give advice. The project was presented and opened up to discussion at a conference in Budva (Montenegro) organised by the Dutch Embassy in December 2014 and attended by representatives from the entire Western Balkans. The discussions with the judges and public prosecutors were successful. One hundred convicts are currently waiting to do their community work; there are 250 cases in the probation service. Montenegro now needs to take up the challenge and expand alternatives to prison, and to put the new Prisons Act and the European prison standards into practice.