Talks held in Mainz on victim support in Romania and Germany 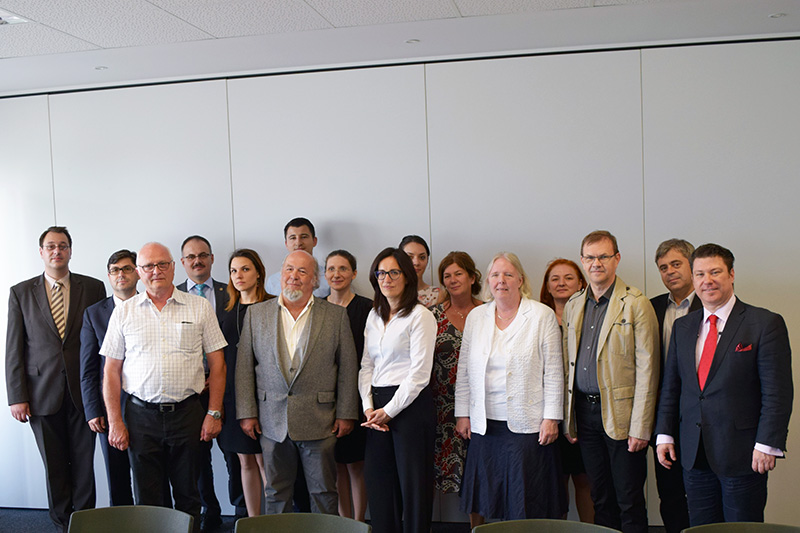 The Romanian delegation with representatives from the victim support organisation, Weißer Ring e.V.

As part of the EU Action Grant project Enhancing the efficiency of the public prosecutor´s offices of Bulgaria and Romania in the field of dealing with victims of crime and promoting their cooperation with local and foreign victim support organisations, a delegation of public prosecutors from institutions in Bucharest, Iaşi, Craiova, Cluj, Timişoara and Arad attended talks in Mainz on 12 and 13 June.

This project has been led by the IRZ in cooperation with the public prosecutor’s offices of Bulgaria and Romania and the Weißer Ring e.V., a German victim support agency, since February 2016. The visit to Mainz focussed specifically on Germany’s experiences in implementing the EU directive on victim support, which must be implemented by all EU member states. On the first day of the visit, the Romanian guests were able to discuss with German representatives the current progress of implementation in Germany, and specifically in the Rhineland-Palatinate region, and were also able to find out more about the newly introduced psychosocial support during proceedings, the Rhineland-Palatinate victim support foundation and the special rights of victims in criminal proceedings.

The delegation visit was rounded off on the second day with talks at the State Office of Criminal Investigation, which dealt in particular with learning about the specific provisions for questioning victims and the cooperation between the police and victim support organisations, and a visit to the Weißer Ring e.V., which also shed light on this cooperation from a different perspective. The day was therefore of particular interest to the guests, since the project that runs until February 2018 is about improving the cooperation between state institutions and victim support organisations in Romania and Bulgaria.

A visit to Mainz by a delegation of Bulgarian public prosecutors, which will deal with the specific circumstances in Bulgaria in this field, is scheduled for the end of June.

Further information on the EU project: Enhancing the efficiency of the public prosecutor´s offices of Bulgaria and Romania in the field of dealing with victims of crime and promoting their cooperation with local and foreign victim support organisations