Russian Committee for Civil Initiatives on a study visit to Germany 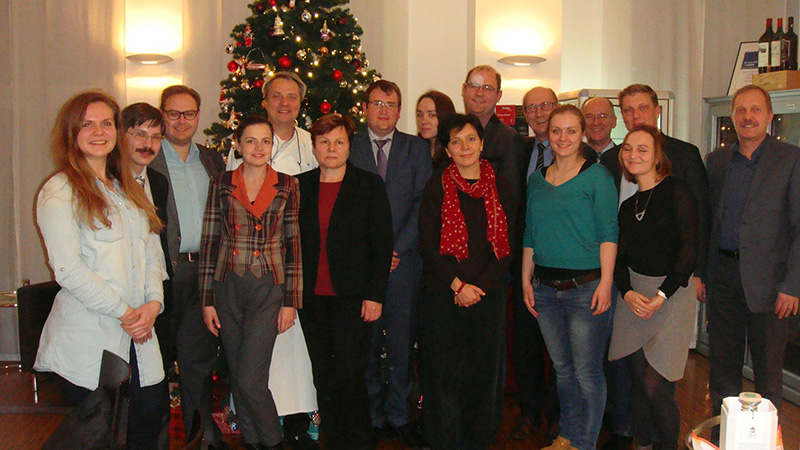 Delegation members at the reception in Schweinfurt

By invitation of the IRZ, the Russian Committee for Civil Initiatives (KGI) visited Germany from 27 November to 3 December 2016 for a study visit on the “Economic development of municipalities – legal framework and practical experience”. The issues of the economic development of municipalities had already been discussed at a conference organised by the IRZ and the KGI on the role of self-government authorities in developing the local economy, which took place in Moscow on 25 May 2016. Since this subject is highly topical and practically significant, the IRZ organised a more in-depth study visit to Germany for the Russian municipality experts.

During the visit, local self-government representatives and experts in municipal law were given a deeper insight into the legal framework for developing the local economy in the German region of Bavaria. During the working visit to the Bavarian State Ministry for the Interior, Construction and Urban Affairs, the Russian guests familiarised themselves with the structure and tasks of local self-government authorities in Bavaria.

During a working session at the New City Hall in Munich, the Russian counterparts learned about the duties and working structures of the Munich city administration.

Expert discussions were also held at the Bavarian State Ministry for Finance, Regional Development and Home Affairs and at the LfA Förderbank Bayern, where the framework of municipal financial compensation, negotiations between the Ministry of Finance and the Municipalities Council on the use of intermediate budgetary resources and funding opportunities for SMEs and municipalities from the LfA Förderbank Bayern were discussed.

During the subsequent visit to the Bavarian Municipalities Council, intense discussions took place on the responsibilities and duties of municipal associations in Bavaria and collaboration between the federal state government and the associations, particularly when it comes to the definition of municipal budgets.

The study visit was supplemented by expert talks with employees of the urban economic departments of Erlangen and Schweinfurt. The members of the delegation were able to learn a great deal about the practical experiences of these municipalities in the field of economic development. In Erlangen, the Russian guests were introduced to the Medical Valley Centre, an innovation centre for medical technology and pharmaceuticals. Here they learned about potential support from companies within the context of the medical cluster and by the management of the Medical Valley Centre. The possibilities of non-financial support for companies from the city were also discussed.

On the last day of the study visit, intense discussions took place with the Managing Director of the GRIBS start-up centre and the Head of the Office for Economic Development and Property for the city of Schweinfurt. The meeting was about the potential offered by the GRIBS start-up centre for providing SMEs with financial support, the tasks of the Economic Department for the City of Schweinfurt and in particular about the conversion protects that are currently underway in the city. During a tour of the modern Maintal industrial and business park organised by their Schweinfurt colleagues, the Russian guests were also able to see for themselves some practical examples of economic support and development in Schweinfurt. This was followed by a lively exchange of experiences on economic development projects and how they are being implemented in Russian towns and cities and in Schweinfurt.