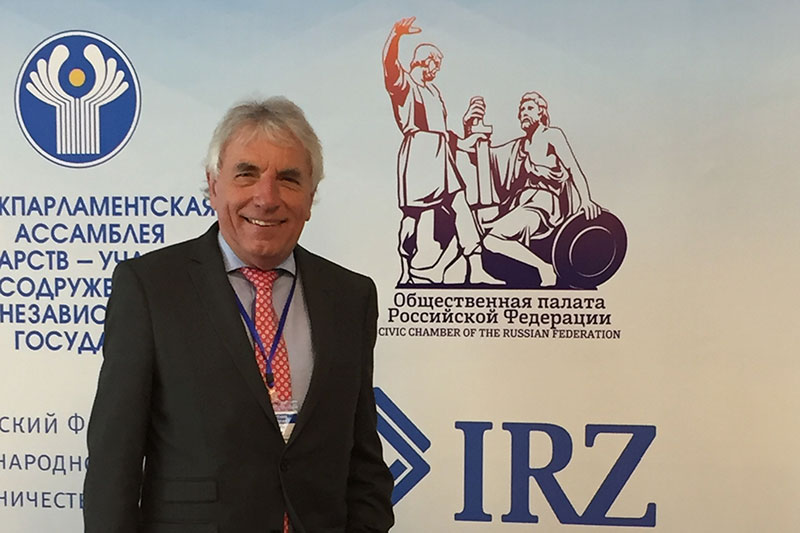 The IRZ expert, Jürgen Roters, a lawyer and former mayor of the city of Cologne

From 10 to 12 April 2018, the fifth International Forum on Best Practices in Local Self-Government was held in Bishkek, the capital of Kyrgyzstan. The main organiser of the Forum was the Union of Russian Cities. The event was supported by the government of the Republic of Kyrgyzstan and by the Bishkek city council.

The event served as a platform for the exchange of established practices in local self-government and brought together high-ranking Russian personalities from local self-government, as well as international participants from other countries, including China, Turkey, Finland, Belarus, Armenia, Tajikistan, Kazakhstan, Moldova, the USA and Germany. The IRZ, supported by an institutional grant from the German Federal Ministry of Justice and Consumer Protection, was represented by Jürgen Roters, a lawyer and former mayor of the city of Cologne.

The official opening was attended by the Deputy Prime Minister of the Republic of Kyrgyzstan, Dair Kenekeev, the mayor of Bishkek, Albek Ibraimov, and the chairperson of the Bishkek city council (Kenesch), Almas Kenenbaev.

Many different workshops were held during the event, covering local self-government subjects including:

In his first lecture on “Investments and the investment climate”, IRZ expert Jürgen Roters talked about the great need for investment in building and renewing infrastructure and presented public-private partnerships as a model for the future.

In his second lecture, Jürgen Roters talked about the subject of “climate change”, starting with a general presentation of the causes and consequences of climate change and then introducing the city of Cologne’s projects on energy efficiency and saving energy. He also presented the “GrowSmarter” EU project, which has been awarded to the city of Cologne in close cooperation with other partners.

As these lectures were met with great interest by the participants and event organisers alike, further events on local self-government are being planned with the Russian partners with the participation of Jürgen Roters.