The public policy situation has barely changed compared to recent years. Political tensions were exacerbated by the conflict around the Black Sea toward the end of the year. It is therefore all the more important to maintain dialogue at technical level. Not only does this apply to cultural and educational exchange during a thematic year, which has been extended until 2020, it is also true of the area of law. Here, for instance, there was a resumption of German-Russian cooperation in security issues. Chaired by Vladimir Titov, First Deputy Foreign Minister of the Russian Federation, and Andreas Michaelis, State Secretary of the Federal Foreign Office, the thirteenth plenary meeting of the German-Russian High-Level Working Group on Security Policy was held in Berlin in November, the first of its kind after a six-year hiatus.

As in previous years, cooperation focused on civil and commercial law, especially the area of patent and trademark law, as well as on support in the development of local self-administration. Cooperation in the area of local self-administration took place in line with the “GermanRussian Year of Municipal and Regional Partnerships 2017/2018“, which was funded by the Federal Foreign Office.

Particular attention was paid during the reporting year to the issue of digitisation, which, in view of its considerable significance, was examined from the perspective of its implications for criminal law, commercial activities and civil law.

Moreover, another pleasing aspect is the cooperation with the School of Private Law, where a German language course was offered for young legal professionals. The participating students had the opportunity to put their newly acquired or improved language skills to the test during the “IRZ Summer School on German Law“. Cooperation also continued with students at the Law Academy.

A funding by the Federal Ministry of Justice and Consumer Protection funds the cooperation with the Russian Federation; additional resources are obtained within the framework on the initiative on legal cooperation by The Federal Foreign Office.

Cooperation is scheduled to be intensively continued in 2019, despite some challenges. Civil and commercial law, law of lawyers and notary law continue to be important legal areas. Moreover, a focus will remain on improving the efficiency of enforcement and strengthening local self-administration. Basic and further training measures in other legal areas will continue as well.

Russia is not part of the Eastern Partnership of the EU, as Russia opted against participating in the European Neighbourhood Policy when it took effect in 2003. Thus, relations between Russia and the EU are still based on the 1997 Partnership and Cooperation Agreement. The plan was to develop relations with the EU further based on this Agreement. Russia’s relations with the EU as well as the German-Russian relations were overshadowed, however, by the annexation of Crimea and actions taken in Eastern Ukraine, which is why Russia’s negotiations for a new agreement with the EU were suspended in 2014. At the same time, the Federal Government has repeatedly emphasised that it is strongly and actively committed to overcoming this conflict through dialogue.

As a state neighbouring on the EU and a member of the G8, Russia is an important partner also for the Federal Republic of Germany in many respects. That is why good and close cooperation is not only crucial in fields that are becoming increasingly global, such as energy, the economy and climate policy, but also in the field of law. The challenge, for instance regarding a comprehensive modernisation of the country, lies in supporting the further development of a democratic society and the establishment of the rule of law.

The legal policy situation in the Russian Federation did not change significantly in 2017 as compared to the situation in previous years. The existing political tensions and the economic sanctions persisted. These factors are shaping cooperation with Russian partners increasingly also in the legal field.

Since its foundation, the IRZ has been involved in almost all legal fields of the Russian Federation. A key focus will continue to be the civil law reform, in particular the collaboration with the Research Centre of Private Law.

As part of the VII. International Legal Forum in St. Petersburg, the IRZ and its experts were able to participate in the insolvency forum and the round tables on questions of tenancy law and matters of intellectual property. General civil procedure and mediation issues were also addressed in joint activities.

The year 2017 saw the protection of intellectual property as a key aspect once again. The IRZ collaborated with the Association of Patent Lawyers, Innopraktika (NGO for economy innovation) and Rospatent (Russian Federal Service for Intellectual Property). Cooperation was also continued with the Russian Federal Chamber of Lawyers in a tried and tested manner. Support for the professional associations continues to be crucial. Contacts and networks also still need to be maintained intensively.

In the year under review, the IRZ vigorously supported efforts to strengthen local self-administration. Due to its federal state structure and its resulting vertical separation of powers, the German municipal system is of great interest to Russian municipal representatives. For this reason, the IRZ strives to organise a study trip with different goals each year to give Russian participants the opportunity to experience various communal models.

The IRZ also continued its cooperation with the Penitentiary Service and the Federal Service of Bailiffs. Current events have shown that issues such as protection of human rights in prison, adjustment to European standards and issues relating to prison service arrangements remain as topical as ever.

The cooperation is partially conducted within the framework of the initiative for legal cooperation sponsored by the Federal Foreign Office.

In 2018, the IRZ plans to continue its intensive cooperation with its longterm Russian partners. The focus will once more be on civil and commercial law and the development of the judiciary. Consultations within the framework of the modernisation of the Civil Code of the Russian Federation are also to be carried on, especially in the areas of the law of obligation, contract law and property law. The ongoing cooperation in the areas of notary law, the law on lawyers, the humanisation of the penitentiary system, the promotion of alternative dispute resolution methods, such as business mediation, the improvement of the effectiveness of enforcement and the strengthening of local self-administration as well as basic and further training measures in other legal areas will also be continued. 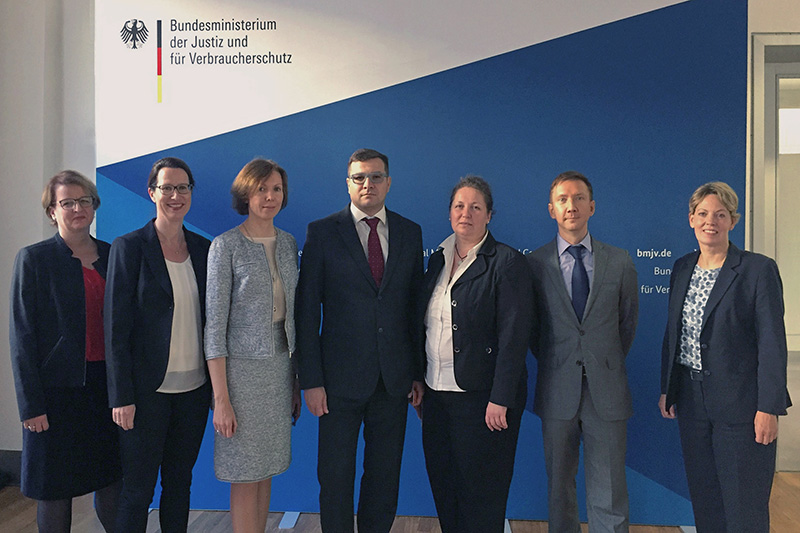 Study visit in Berlin and Potsdam on the topic “Statutory regulation of the working methods of constitutional courts in the federal states of the Federal Republic of Germany”: Alexandra Albrecht (2nd from left), Federal Ministry of Justice and Consumer Protection; Svetlana Beniaminova (3rd from left), President of the Constitutional Court of the Republic of Karelia; Veronika Keller-Engels, General Director of the IRZ (right)

The legal policy situation in the Russian Federation did not change significantly in 2016 when compared to the situation in previous years. However, the law became significantly tighter in the Criminal Code and other statutes within the framework of a package of anti-terror laws which considerably increase the powers of the security authorities and raise data protection law problems. In spite of extensive criticism, the new provisions for the most part entered into force. There are very positive tendencies in the sphere of civil and commercial law: The Civil Code was supplemented in particular in the spheres of contract law and the law of ownership, and the Private Insolvency Act was revised. In addition, the statutes covering the work of a patent lawyer are also intended for preparation.

The political tensions and the economic sanctions have had little effect on cooperation with the IRZ’s long-term partners in the legal field, although a certain reticence is evident in the cooperation with the Russian court system. The IRZ was also able to implement a number of events in 2016, both bilaterally and within the framework of the further training programme established and supported by the German Federal Foreign Office on the promotion of structures in the rule of law.

Cooperation with the Research Centre of Private Law continued to focus on civil law reform. During the sixth Legal Forum in St. Petersburg, IRZ experts participated in roundtable discussions on insolvency and residential ownership law. Detailed advice was also provided on residential ownership in Germany. The problems in this sphere which arose after privatisation in the 1990s are still very current and are intended to be resolved within the framework of a reform.

A further focus was placed on the protection of intellectual property in the reporting year. The IRZ in particular worked with the Association of Patent Lawyers and the Federation Council. Cooperation was also continued with the Russian Federal Chamber of Lawyers in the tried and tested way . Support for the professional associations is particular important in today’s situation in order to maintain contacts and networks. The IRZ has also long since supported efforts to strengthen local self-administration and intensified the cooperation with the Civil Initiatives Committee that started last year (KGI).

The IRZ also continued its cooperation with the Federal Penitentiary Service. Current events have shown that issues such as protection of human rights in prison, adjustment to European standards and issues relating to prison service arrangements remain as topical as ever.

In 2017 the IRZ plans to make its contribution towards the consolidation and strengthening of the rule of law together with its Russian partners. The focus will continue to be on civil and commercial law here. In particular, the intention is to intensively continue the consultations on contract law and in the field of intellectual property. This also affects cooperation with the lawyers and the notaries. Improving the quality of enforcement, strengthening local self-administration and the humanisation of the prison system likewise remain important topics in the cooperation with the Russian Federation in the forthcoming year.