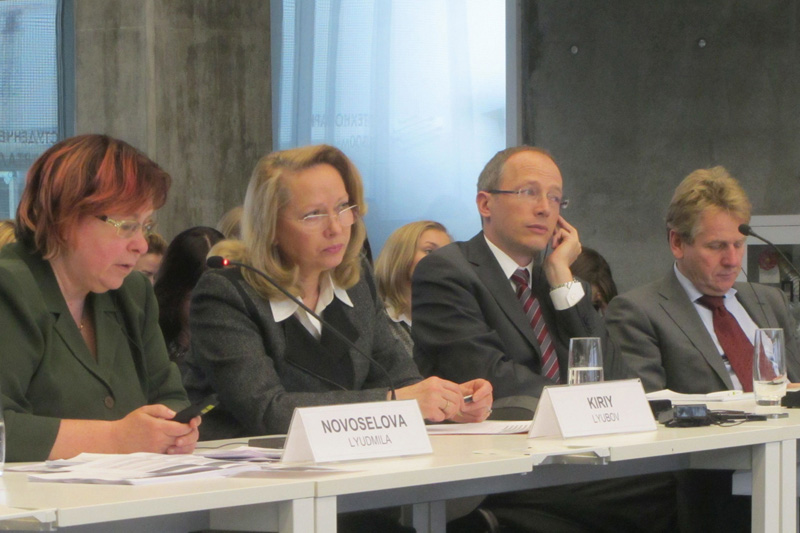 The framework has been made more difficult as a result of an open political conflict for the first time since the start of cooperation with the Russian Federation. Particularly in such a situation, it is important – and desired by the Federal Government – not to permit the dialogue to break down, and to maintain the intensive relations with the partners at operational level which have been developed over the years.

Certain reservations of a more formal nature can be observed in relation to the joint activities with the IRZ as a foreign organisation within the cooperation with the Russian partners. This however does not affect the factual openness in questions within the reform discussions.

A major development for the legal life of the Russian Federation in 2014 was the abolition of the Supreme Commercial Court, the jurisdiction of which was transferred to the new Supreme Court. It is still difficult to estimate at the moment whether this will impact the ongoing cooperation.

Furthermore, the reform of the Civil Code continues to be at the core of the discussion, and a clear focus was placed on the reform of property law in 2014. In this context, there was intensive discussion once more of the role of notaries in the conclusion of real estate transactions. An appropriate law, which provided for the mandatory involvement of a notary in contracts to purchase real estate, was not adopted. It is however anticipated that an Act will be adopted at the beginning of 2015 which will at least strengthen the function of notaries in real estate transactions.

Despite the political events, it has been possible to largely maintain the contacts with the long-term partners, so that it was possible to implement a number of events in the year under report, including within the further training programme on the promotion of rule-of-law structures – an initiative of the Federal Foreign Office.

The IRZ placed a clear focus in 2014 on cooperation in the field of industrial property rights. The cooperation that was initiated last year with the new court for intellectual property was successful, and amongst other things it was possible to win over the President of the Federal Patent Court to attend the international conference on trademark law and a subsequent seminar for judges. Parallel to this, the IRZ took up cooperation with the Russian patent lawyers.

The IRZ addressed civil law reform at several levels: The IRZ attended the International Legal Forum in St. Petersburg for the fourth time. The IRZ concentrated here amongst other things on questions related to property law and the participation of notaries in real estate transactions, and a roundtable was organised specifically for this. Moreover, further German experts recruited by the IRZ also attended other discussions. Further events were implemented on current civil law topics in cooperation with the Research Centre of Private Law.

Cooperation with the Federal Prison Service was continued in the area of prison work. Topics such as respect for human rights in prison, protection of these rights, adjustment to European standards, as well as questions related to prison service arrangements, remain topical, and will continue to be the focus of cooperation. Consultation with the Federal Bar of the Russian Federation continued in the tried-and-tested manner.

The IRZ has also supported for quite some time the strengthening of local self-government as a wellspring of democracy in the Russian Federation. It was able to work together for the first time with the Civil Initiatives Committee in this field, in which amongst others former Finance Minister Alexei Kudrin is involved.

In 2015, the IRZ would like to increase cooperation with lawyers, as well as with notaries, whose work forms an important link between the judiciary and civil society. Furthermore, the IRZ is planning consultation in the context of the modernisation of the Civil Code of the Russian Federation. It is to be continued in cooperation with the Research Centre of Private Law and the Association of Lawyers. Cooperation with the new Supreme Court is to be recommenced where possible. Further priorities will be on the exchange with the Court for Intellectual Property, the introduction of an administrative court, pre-litigation administrative procedure, the quality of coercive execution, strengthening local self-government, as well as the humanisation of the prison system.

As far as possible, and depending on political developments going forward, the IRZ would also like in 2015 to make its contribution towards consolidating and strengthening the rule of law, together with the Russian partners.