The forum programme opened up new opportunities for expert discussions. More than fifty round tables were organised, dealing in particular with topical legal issues.

The experts recruited by the IRZ took an active part in the round tables on the law of obligations, property law and trademark law.

Dr Oliver Schön, Judge at the Higher Regional Court of Bremen, was involved in the topic "Trademarks – shield or sword? - Topical issues in legal practice". This trademark law event dealt with issues in relation to legal disputes regarding the transposition, cancellation and infringement of trademark laws, with a particular focus on the abuse of trademark law. Against the background of international experience, this round table was intended to improve legal practice, in particular with regard to the case law in cases concerning the acquisition and protection of trademark rights.

The round table on "Restricted property rights: The more advantageous side of the Civil Code for businesses" was attended by Günther Jannsen, former Judge at the Higher Regional Court of Oldenburg, and Wolfram Marx, Head of Division at the Federal Ministry of Justice and Consumer Protection. This event on property law was moderated by Veniamin Yakovlev, Advisor to the President of the Russian Federation in legal matters. It covered the system of restricted rights in rem and leaseholds as well as the relationship between the rights in rem project and the new legislation and developing land in a foreign country. The experts dealt in particular with the issue of rights of use and the development of foreign property and outlined the legal consequences of such a situation in Germany.

The event dealing with the "Reform of liability in Russia: Agenda for 2015" was attended by Eugenia Kurzynsky-Singer, Senior Research Fellow at Max-Planck Institute, and Professor Lorenz Kähler, University of Bremen. This round table dealt in particular with the new legislation with regard to independent guarantees. In this context Professor Kähler provided an outline of guarantees and statutory warranty rights in Germany. He also dealt in depth with the issue of pre-contractual liability. Eugenia Kurzynsky-Singer outlined the principles of the legal concept of culpa in contrahendo.

Upon the initiative of the Lawyers' Association of the Russian Federationthe IRZ organised a working visit for a Russian delegation.The high-ranking guests visited institutions in Dusseldorf, Essen and Cologne from 13 to 16 April 2015 and dealt with the topic "specific features in the settlement of economic disputes involving entrepreneurs ".

The Russian participants were the Deputy Minister of Justice, Alu Alchanov, and the Deputy Prosecutor General, Sabir Kekhlerov, who is also a member of the Council at the President of the Russian Federation on Codification and Development of Civil Legislation. Further participants were, among others:

The first working visit to the Ministry of Finance of North Rhine-Westphalia dealt with the structure of the German tax law and how the fiscal competence is divided among the German federal and laender authorities and the municipalities. Other topics of the meetings at the Ministry of Finance included the taxes raised in connection with real estate as well as tax investigation in Germany.

The following visit to the Ministry of Justice of North Rhine-Westphalia was marked by intensive talks about the following topics:

On the second day, the delegation gained an insight into the practical work of the registration office, the RegiSTAR proceedings system unit and the land registry section of the local court of Essen.

On the last day, the delegation visited the German Institution of Arbitration and a bailiff's office and held talks with the President of Deutscher Bund der Gerichtsvollzieher e. V. (German Bailiffs' Association). 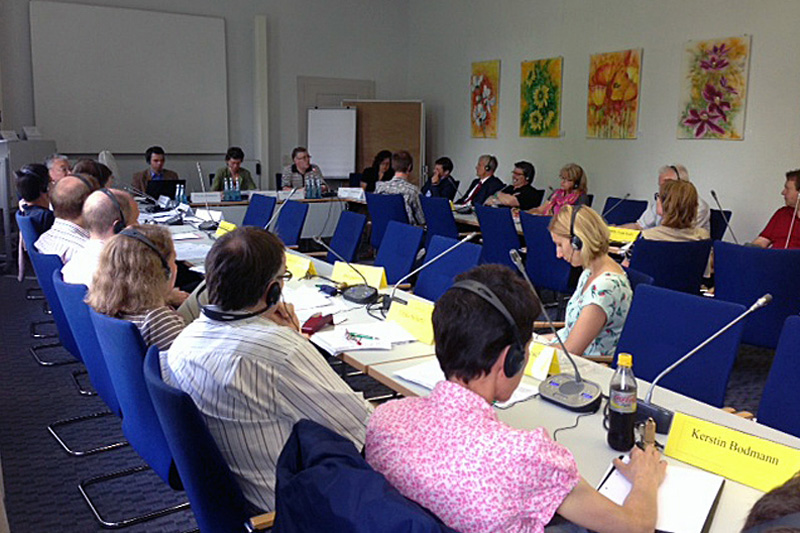