Serbian working visit on administrative jurisdiction in partnership with the OSCE 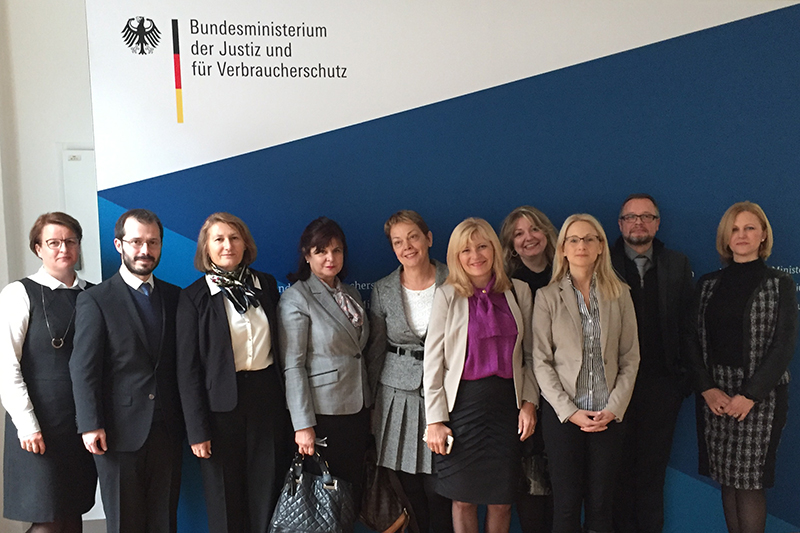 The group of visitors after their discussions at the BMJV

From 6 to 10 November, the IRZ, together with the OSCE mission in Serbia, organised a working visit on administrative court proceedings in Germany. Members of the Serbian delegation, which was led by the Vice-President of the Serbian Administrative Court, Dušica Marinković, are preparing for the possible introduction of stages of appeal to administrative court proceedings in Serbia. During their visit, the focus was therefore on the issue of appeal, particularly with regard to its legitimacy.

The visit began with an introduction at the German Federal Ministry of Justice and Consumer Protection (BMJV), where Claudia Eller-Funke, a speaker from the department of International Legal Cooperation, welcomed the Serbian guests. Theodoros Mavridis, Public Prosecutor’s Office, department of administrative, financial and social jurisdiction at the BMJV, then provided a fundamental overview of administrative court proceedings in Germany. The next day, the knowledge gained here was expanded still further during a visit to a court hearing at the Administrative Court of Berlin and in discussions with presiding judge Jens Tegtmeier. This practical exchange of experiences continued with expert discussions at the “House of Law” with Dr. Florian von Alemann, a member of the Executive Committee of the Association of German Administrative Judges (Bundes Deutscher Verwaltungsrichter und Verwaltungsrichterinnen or BDVR).

The last stop on the working visit, which also included an overview of the work of the BMJV in general and a visit to the German Bundestag, was the German Federal Administrative Court in Leipzig. Here, Martin Steinkühler, one of the court judges, was available for in-depth discussions.

The visit to Germany provided plenty of valuable inspiration and showed the importance of keeping informed about the relevant practical framework when using foreign law as a point of reference. For example, it soon became clear that, in order to achieve effective legal protection in a system where appeals are admitted, there is a requirement for the appropriate quality of decisions made by administrative authorities and the court of first instance.