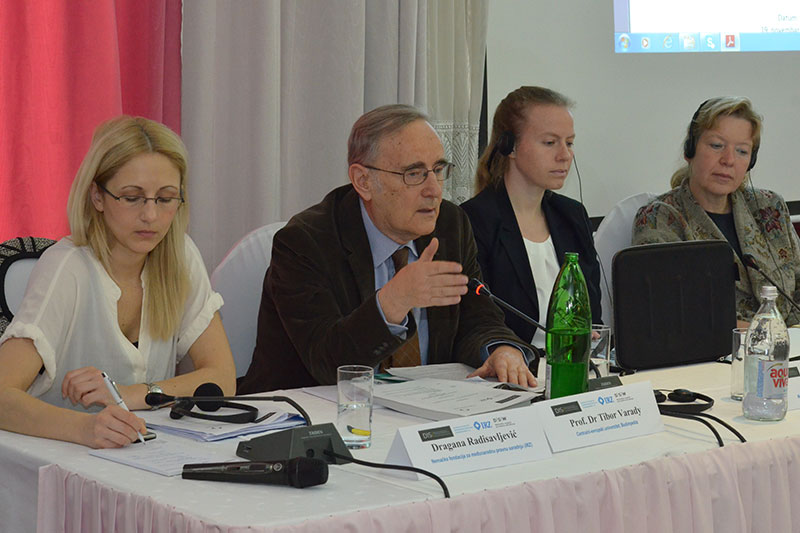 Conference on the promotion of arbitration in Belgrade: On the Podium: Dragana Radisavljevic, IRZ; Prof. Dr. Tibor Varady; attorney Ruth Mosch; Gabriele Bennemann, Head of the Economic Department of the German Embassy in Serbia (left to right)

The legal policy starting point in Serbia changed considerably in January 2014, when negotiations with the EU on accession were officially launched. This means that there is a greater need for consultation in harmonising the law and for support in training for the practical application of the law. In the view of the EU, particular efforts also need to be made in the areas of the judiciary and fundamental rights, as well as in the topics of the justice system, freedom and security.

The IRZ began legal cooperation with Serbia in 2000 in the framework of the Stability Pact for South East Europe. Its topics since then have been consultation on important EU-compatible reform statutes, on the structure of the judicial system, as well as on the basic and further training of legal practitioners.

The many years of cooperation with the Serbian Constitutional Court on the successful introduction of the constitutional complaint constitute a special focus. Furthermore, the IRZ implemented a whole series of third-party-funded projects, some of which were very extensive. The IRZ has also worked more intensively with non-governmental organisations in recent years.

Its partners include the Constitutional Court, the Judicial Academy, the Parliament's Committee on Legal Affairs, the Faculties of Law of the Universities of Belgrade, Kragujevac and Nis, the German-Serbian Business Association (DSW), the Zoran Djindjic Foundation, the Society for Insurance Law, the Delegate Office of German Industry and Commerce for Serbia, the Singipedia academic Internet portal, the Society for the Study and Reception of German Law, as well as the Harmonius Network of Young Legal Scholars in South-East Europe.

The main goal of the IRZ in Serbia is to support the country on its course towards the EU. The focus here lies in effective implementation of the laws corresponding to the principles of the rule of law. The activities aim to continue consultation through successful implementation. The IRZ stresses here the significance of a clear orientation towards continental European legal principles and legal models in order to avoid hybrid solutions. Furthermore, it is stepping up cooperation between lawyers from Serbia and its neighbouring countries.

The IRZ will be continuing the series of seminars and further training events with the abovementioned partner organisations and continuing to support them in the implementation of the Judicial Reform Acts. It will be stepping up cooperation with institutions and individual national experts working in the field of research on German law and its reception, including its contacts and experience from the project work in further countries of the region. This includes support for young lawyers, in particular those with a knowledge of German language and law.