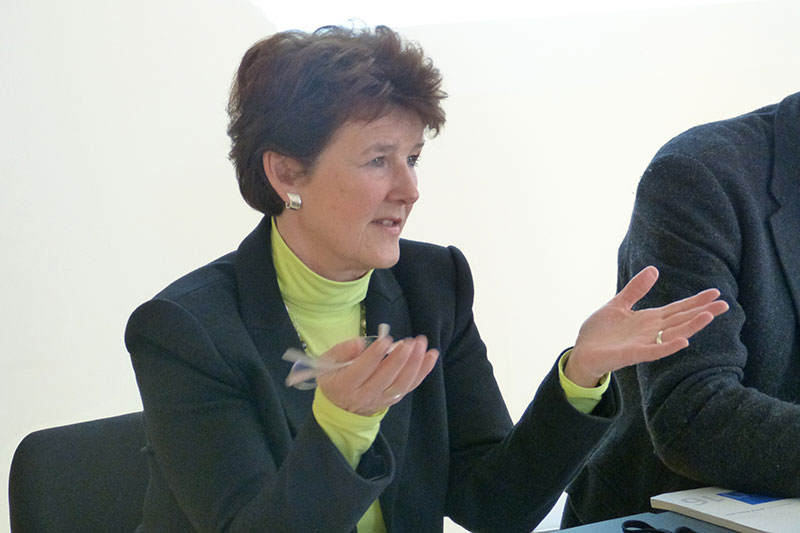 - Lawyer Dr. Birgit Grundmann, former Secretary of State at the German Federal Ministry of Justice and Consumer Protection and Executive Board member of the IRZ

The Diplomatic Academy of the German Foreign Office organised its eighth course for trainee diplomats from the Western Balkans from 13 February to 10 March 2018. Once again this year, the course programme included a presentation of the IRZ.

The following people gave lectures on the activities of the IRZ in South-East Europe:

The short introductory lectures given in English were followed by intense discussions, which were moderated by Gudrun Steinacker, Head of the West Balkans course at the Diplomatic Academy and a former ambassador. She had supported the activities of the IRZ on site in Bulgaria, Macedonia and Montenegro.

Sixteen participants from Albania, Bosnia and Herzegovina, Croatia, Kosovo, Macedonia, Montenegro and Serbia took an active and dynamic role in the discussions

The topics discussed were very wide-ranging:

The participants also showed a particular interest in IRZ legal publications in their own languages.

The event “Conflict management – Preparation and avoidance of arbitration proceedings“ on 12 December 2017 in Belgrade was the sixth annual conference on various aspects of arbitration jointly organised by the IRZ, the German Institution of Arbitration (DIS) and the German-Serbian Chamber of Industry and Commerce (AHK).

The conference was opened by the German business delegate in Serbia, Martin Knapp, and Dr. Stefan Pürner, IRZ, who welcomed the participants also on behalf of the DIS as co-organiser. The opening was followed by a welcome address by Matthias Schikorski from the German Embassy in Serbia in which he emphasized the importance of arbitration in particular in cross-border business relations.

Prof. Dr. Tibor Varady, former Minister of Justice and author of numerous international publications on arbitration, then spoke on the importance of the arbitration agreement for later dispute resolution.

Prof. Dr. Jörg Risse, LL. M. from the law firm Baker & McKenzie, then gave the presentation “Don’t be afraid of the ‚Dispute Beast‘ – How to assess arbitration risks and opportunities in a structured way and resolve conflicts effectively”

The presentations by these two internationally renowned arbitrators were followed by many questions and intensive discussions. They focused on the methodology for determining the prospects of success in contentious proceedings and on the preparation of the results for the clients. The relationship between lawyer and client in general was also discussed.

Round Table on Alternative Sanctions in Niš

On 7th December 2017, our twinning team organised in partnership with the University of Niš, Faculty of Law, a round table on the subject: “Incarceration versus Alternative Sanctions - Building awareness of better social reinsertion of the former prisoners”.

The event took place at the University of Niš and the participants comprised judges, prosecutors, representatives of the municipality and social services, members of non-governmental organizations and specialists from the Administration for Enforcement of Penal Sanctions, our experts from Germany and University professors.

This event was part of an activity within the EU Twinning project: “Improving capacities and capabilities within the prison system in the Republic of Serbia”, that focuses on the preparation of recommendations on the most effective post-release arrangements, including instruments for social integration of the persons leaving penitentiary. The purpose was to raise awareness and to involve the civil society in regard to the challenges faced by the former prisoners in the process of the preparation for release and transition to a decent life in freedom.

The debates were focused on sharing the best practices in the area of post release arrangements performed in the Republic of Serbia and in the EU Member States. The conclusions of the round table will be used to enhance the rehabilitation and reintegration of inmates by promoting more activities in correctional institutions focused on the real needs of the inmates.

The main objective of the 18-month long Twinning project is to strengthen capacities for training, education and employment of convicted persons and to improve living and working conditions within the prison system in the Republic of Serbia. The project is dedicated to the improvement of organizational and technical capacities of the Centre for Training and Vocational Education in Niš for further preparation and delivery of training programmes for the staff employed within the system of enforcement of penitentiary sanctions.