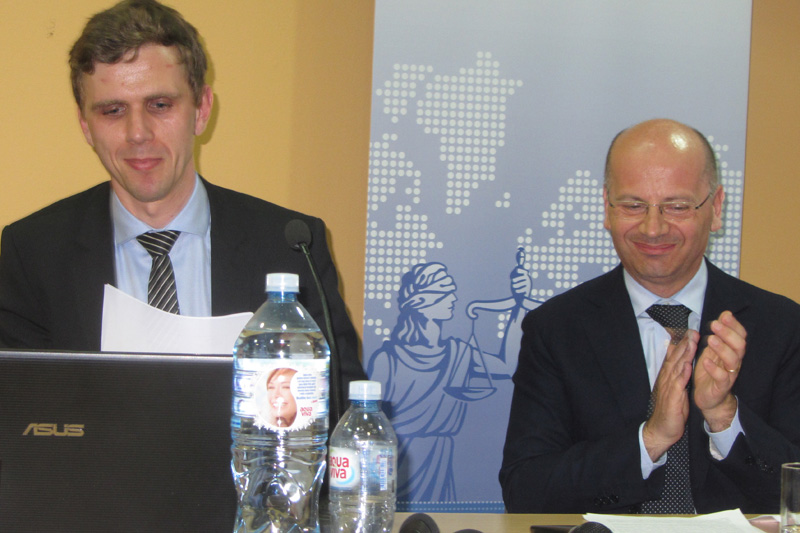 Almost eighty law professionals held lively discussions in five panels about the different kinds of insurance contracts and issues of insurance regulation. Here it became particularly clear that private and public law influence each other in many different ways, especially with regard to insurance law.

The conference participants were mostly from Serbia and other states in the region (Bosnia-Herzegovina, Croatia, Slovenia) and Turkey, but also from the EU Member States: Austria, the Czech Republic, Germany, Greece, Italy, Portugal and the United Kingdom.

Comparative law issues played a major role given the international participants. The conference focused on German insurance contract law, which was available to participants in a Bosnian-Croat-Serbian translation including an introduction, published by the IRZ. This and the fact that the presentations given at the conference are also issued in the publications series of the Association for Insurance Law of Serbia make this event particularly sustainable.

The conference was opened by Professor Jovan Slavnic, Honorary President of the Association of Insurance Law of Serbia, the Serbian AIDA section (Association Internationale de Droit des Assurances – International Association for Insurance Law). He pointed out that the good cooperation with the GDV and IRZ had existed for a long time and had developed constantly over the years. He also stated that dealing in-depth with German insurance contract law in Serbia would also be of great benefit because there was a discussion going on about a comprehensive recodification of the entire law of obligations and contract law. This, he continued, was taking place within the project for the creation of a uniform code of private law.

German law as a "law of orientation" was also emphasised insofar as Germany accounted for the second largest group of contributors after the host country Serbia.

New publication on ECHR in Serbian

Within the long-existing cooperation between the IRZ and the European Court of Human Rights (ECHR), the Council of Europe and the European Union Agency for Fundamental Rights (FRA) in the countries of South East Europe, a further publication has now been completed with the Serbian translation of the "Handbook on European non-discrimination law":

So this publication is now also available to the law experts in Serbia. Interested English-speaking readers can download the handbook from the website of FRA: Handbook on European non-discrimination law.

Within this IRZ project, publications on the ECHR are regularly published in Bosnian, Macedonian, Croatian and Serbian.

The IRZ has been supporting the knowledge of German law in Southeast Europe for a long time with a series of translations of German law publications with commentaries, monographs and text books which are of interest in these states as well. Translations which have been published in this context so far include the German Code of Criminal Procedure, the German "Guidelines for Criminal Proceedings and Proceedings Concerning Regulatory Offences (RiStBV)" and the 10th book of the German Code of Civil Procedure. But also provisions of the German Federal states such as the Bavarian legal training and examination regulations or the implementing regulations on the official appraisal of judges of the Federal State of North-Rhine Westphalia have already been published. Other publications include text books on European law, a volume with lectures on administrative law and administrative jurisdiction as well as a monograph by the former President of the Federal Constitutional Court, Prof Dr Jutta Limbach.

A Bosnian-Croatian-Serbian translation of the German insurance contract law has now been issued within these activities. Hence, the text of this German law, which is relevant also in economic terms, is now also available in a language which is spoken by most lawyers in the successor states of former Yugoslavia.

A detailed introduction which also refers to the law of the region provides for an easier understanding of the German law text by the readers of the region. It was written by Dr Slavko Djordjevic, a German-speaking professor at the law faculty of Kragujevac, Serbia, and Dr Darko Samardzic, a German lawyer with a Serbian background. The former president of the Serbian Insurance Law Association, Prof Dr Jovan Slavnic, made a contribution in which he submits some suggestions for the future regulation of the insurance contract in the Serbian law based on the German law.

The publication is part of the IRZ's long-standing cooperation with the above-mentioned Serbian Association in the field of insurance law which the GDV regularly supports with its contributors.