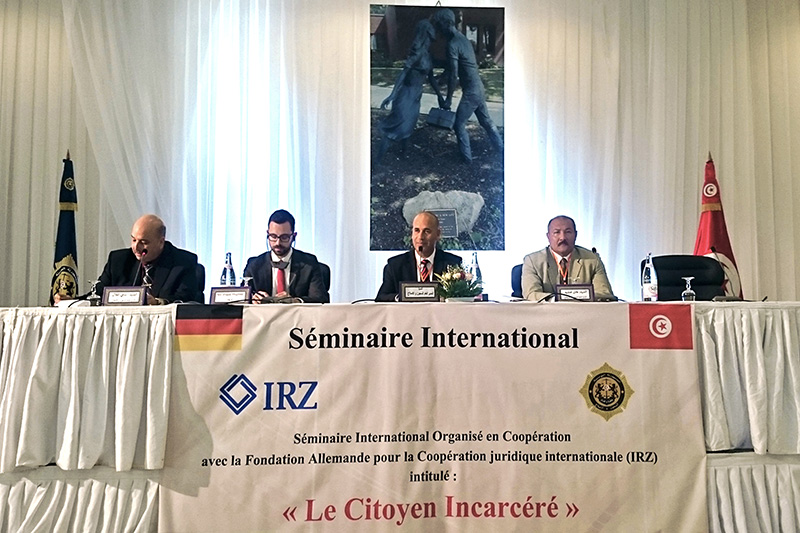 Conference to reform the prison system in Tunisia on the topic of “The imprisoned citizen” in Tunis with the Head of the Prison Service, Sabeur Khefifi (2nd from right)

Five years after the revolution, Tunisia has still not found its political stability. Since the revolution, there have been seven new governments, on average a new one every eight months. In early August 2016, Prime Minister Habib Essid lost a vote of no confidence in Parliament after just 18 months of government. The country therefore finds itself in a critical economic and political phase. Important pillars for the future government will be the security and the implementation of the rule of law , the anchoring of democracy and continuation of the economic development, as well as the implementation of the projects necessary for this.

The new government has announced that it plans to implement urgent reforms, stimulate economic growth, create new jobs and communicate better with the general public. The fight against corruption and terrorism continues to be the highest priority. If the economic crisis in the North African country has not yet been overcome in the forthcoming year, drastic savings measures, higher taxes and staff cutbacks in the civil service can be anticipated.

In spite of the difficult political framework conditions, Tunisian authorities and Tunisian civil society continue to push forward the legal policy and social reform process. The improvement of the security situation in the second half of the year had a positive effect on tourism and the investment climate in the country.

In the judicial field, elections to the so-called High Judicial Council and its establishment must be mentioned first as landmarks in 2016. Following three years of intensive and controversial discussions about the High Judicial Council’s establishment and field of operation, the Council regulates the position and the independence of the judiciary in the Tunisian state structure. Following its formation pursuant to the new Constitution of 2014, the Constitutional Court was established, which creates additional security for the rule of law and for the freedoms and rights of the country’s citizens. Intensive German advice was provided for the statute on the establishment of the Constitutional Court, so the IRZ will also support the reform process with future events.

The administrative courts have also continued to undergo intensive reform efforts in 2016 with the aim of developing and adopting a Code of Administrative Court Procedure. This process is in the final phase and draft legislation is set to be submitted at the start of 2017. In this context, numerous individual questions arise, which are repeatedly discussed in different forms at IRZ events.

Continuing reform efforts have also been pursued in the prison system since 2011. The major structural issues, such as for example prison overcrowding, alternative criminal sanctions systems, the social rehabilitation of convicts, etc., still require considerable effort. In this context, the Tunisian government has developed a systematic reform approach and passed a four-year plan from 2015 to 2019 on the reform of the judiciary and the prison system, which the IRZ supports with advice.

The IRZ plans to continue its commitment in the abovementioned fields in 2017. They are all of high topicality and require sustained cooperation. The focus of the administrative courts is primarily placed on drafting a Code of Administrative Court Procedure. As regards the constitutional courts, once a new Constitutional Courts Act has been passed, issues relating to the structure and organisation of the Constitutional Court will in particular be the focus of attention.