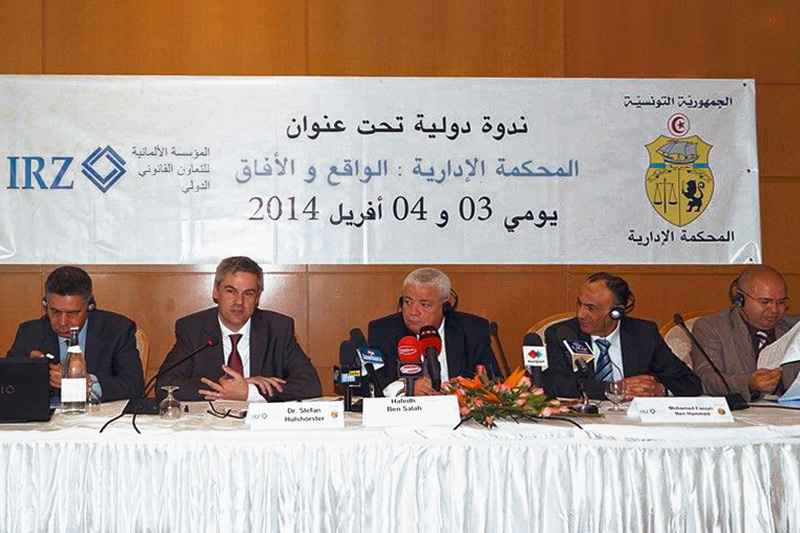 The legal-policy situation in Tunisia improved markedly in 2014. The Constitutional Assembly adopted a new constitution after two years of discussions. Peaceful parliamentary and presidential elections set the stage for Tunisia’s future democratic development. Both were welcomed by international players. Even though the reform process continues to face many obstacles, the experience of the IRZ in the last three years showed that the respective governments, as well as the representatives of the judiciary, the prison system and other institutions, have faced these challenges with honest commitment.

The IRZ was able in 2014 to further intensify the cooperation, which was already being implemented in very good faith. In particular, it was able to further expand the contacts with the administrative courts, which are to lead to an increased commitment in this field in the years to come. The monitoring of state or government activities by the administrative courts is essential for the democratic-rule-of-law process. Amongst other things, this was discussed at events on electoral complaints and on the monitoring of elections by the administrative courts. Moreover, two study visits to Germany for Tunisian administrative court judges offered opportunities for an exchange with the Federal Constitutional Court and the Federal Administrative Court. The IRZ advised the President of the Constitutional Assembly with regard to the establishment of a Constitutional Court. The IRZ also maintained its operations in the prison system in Tunisia. For instance, in cooperation with the Tunisian Ministry of Justice, the IRZ once again organised in 2014 a major national conference on the state of the reform of the prison system, at which the developments of the recent year were subject to a critical review. The attendees at the conference, including representatives from civil society organisations and the media, discussed the shortcomings and progress made in the reform of the prison system with considerable openness and showed the way forward in the reform process going forward.

The IRZ was also able to maintain and expand its cooperation with the Tunisian Notaries’ Association. In several events, including a major conference, prospects for reform in the notary system were discussed in cooperation with the German Association of Notaries and the Federal Chamber of Notaries. This field, which is frequently disregarded in international reform efforts, is of major significance for an economy that is structured along rule-of-law lines, where deeds must be reliable and where monitoring, consultation and guarantee functions must be ensured in complex transactions. Furthermore, Tunisian and Egyptian judges jointly attended the internship at German courts which is organised by the IRZ on an annual basis.

Cooperation in 2015 is to focus in particular on administrative courts. The IRZ will also continue to advise in the field of penitentiary system.