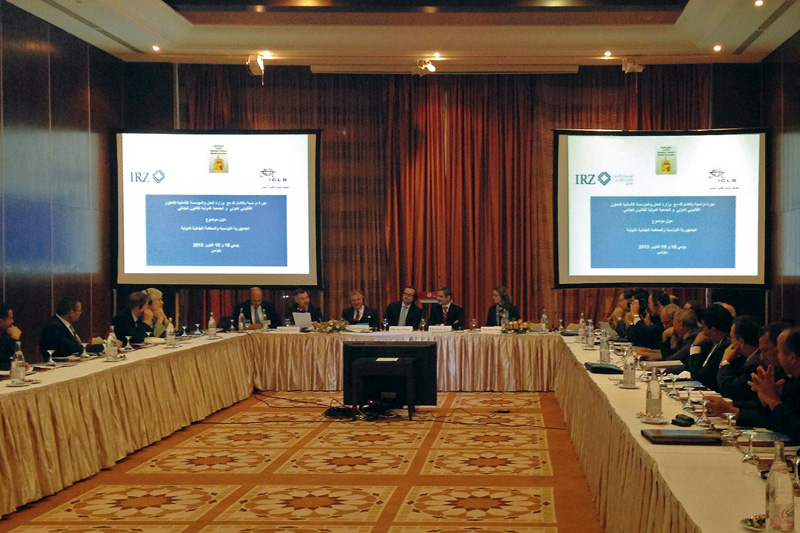 Conference in Tunis on the International Criminal Court

The ongoing post-revolutionary process in Tunisia remained difficult in 2013, but there were also first signs of hope. The security situation has slowed the restructuring process through two politically-motivated attacks and to some extent warlike clashes with extremist Islamic groups. The adoption of a Constitution was delayed in 2013; it was however possible to bring the process to a conclusion one year later than planned, in January 2014, after two years of discussions, and this was also welcomed by many international players. The continuing political and institutional reform process is taking place against the background of undiminished problems in economic development, which is typified amongst other things, by a high level of youth unemployment. Because of its generally stable security situation, Tunisia was nonetheless able to benefit from a considerable increase in tourism in the summer of 2013. Even if the situation in Tunisia is difficult, there are still sufficient signs that permit one to be optimistic. With a manageable population of approx. 11 million inhabitants and a comparatively high level of education, there is a willingness to enter into dialogue and to make compromises despite all the social and political differences.

The IRZ's work, which commenced in 2011, was largely unaffected by the political turbulences. On the contrary, it can in fact be said that its development has been excellent. Existing contacts were developed and new partners acquired. Despite the partly turbulent political situation, rule-of-law cooperation was characterised by continuity. The Tunisian Government impressively proved its willingness to be transparent and to reform at a conference that was organised by the IRZ on the reform of the prison system. Speaking in front of approx. 400 participants from the State and from civil society, the President of the constitutional assembly, the Minister of Justice, as well as senior civil servants publicly and critically sized up the condition of the prison system in the presence of Tunisian and international television and press representatives. As a result of the conference, the Tunisian Government established four Reform Commissions which have constantly been carrying out their work since then. Cooperation with the prison authorities has developed to some extent a small and successful tradition through various seminars and mutual study and delegation visits in Tunisia and in Germany since 2011. What was new in 2013 was the cooperation with the Tunisian Chamber of Notaries. In cooperation with the Federal Chamber of Notaries and the German Association of Notaries, the IRZ was able to provide valuable aid in this field in the reform of the Tunisian notariat by means of seminars and study visits to Germany. Central questions on the reform related amongst other things to the structure of notarial service supervision, the relationship with the legal profession as well as requirements in terms of expertise and further training. As a result of the cooperation that had been initiated by the IRZ, the German Chamber of Notaries and the German Notary Association each adopted a bilateral cooperation agreement with the Tunisian Chamber of Notaries. What was also new in 2013 was a project funded by the German Academic Exchange Service (DAAD) with the title "Modern administrative and private law". In the context of a cooperation agreement that had previously been concluded with the Law School of the University of Sousse, German speakers from the judiciary, the legal profession and Academia shared knowledge amongst other things in the field of international commercial law, contract law, fundamental rights, administrative courts as well as constitutional law. This was followed by the opportunity for selected participants to expand their knowledge through an internship in Germany at law firms and academic institutions. The programme will be continued in 2014. The IRZ was also able to show the way forward in international civil law cooperation. In cooperation with the Permanent Bureau of the Hague Conference, the IRZ organised an event on the improvement of international cooperation in the context of the Hague Convention, attended by representatives of nine Arab states. A follow-up event is planned to take place in Morocco in 2014. The IRZ held a conference in the field of international criminal law, attended by high-ranking representatives, with the objective of promoting the transposition of the Rome Statute of the International Criminal Court into national Tunisian law.

The need for reform in Tunisia exists regardless of which group forms the government at any particular time. This means that it is one of the principles of the IRZ to work with all counterparts which acknowledge the internationally-recognised principles of the rule of law and democracy. The topical interest of the partners in the government and the judiciary was reflected amongst other things by the constitutional debate in Tunisia. Topics such as the independence of the judiciary and the standing of the public prosecution office, or questions of the formulation of the fundamental right to freedom of assembly, are a few of the legal policy and judicial questions which were discussed at the IRZ's events. The most important principle of the IRZ's consultation work is dialogue on an equal footing. The joint development of reform approaches determines the mutual relationship since Tunisia has a long constitutional law tradition and developed institutions. Both Tunisian and German speakers therefore make equal contributions at all the events. The IRZ only makes offers which are based on actual German and European experience. It is the Tunisian partners who ultimately decide what of this is adopted into Tunisian law, if any.

An important aspect of the IRZ's programme work will be cooperation with the Tunisian administrative and constitutional courts. In accordance with the Constitution, which was adopted at the end of January 2014, a Constitutional Commission, in which amongst others the President of Tunis Administrative Court ("Tribunal Administratif") will be represented, will take up the role of the Constitutional Court, and is to be established for three years. There is therefore considerable need for consultation in this field, and the IRZ as well as representatives from the administrative courts have agreed to provide assistance amongst other things via local events and through specialist discussions during the visit to the Federal Constitutional Court and the Federal Administrative Court. Cooperation with the Chamber of Notaries will also be continued in the shape of seminars in Tunisia and study visits to Germany. A follow-up conference on the topic of the prison system is to build on the IRZ's initiative in this area, to critically examine what has been achieved to date and to identify future action. International civil law cooperation will be continued in the shape of a follow-up conference in Morocco attended by numerous Arab delegations. The cooperation partner is once again the Permanent Bureau of the Hague Conference. A senior-level conference is planned to take place also in Morocco on the status quo of Morocco with regard to the International Criminal Court.