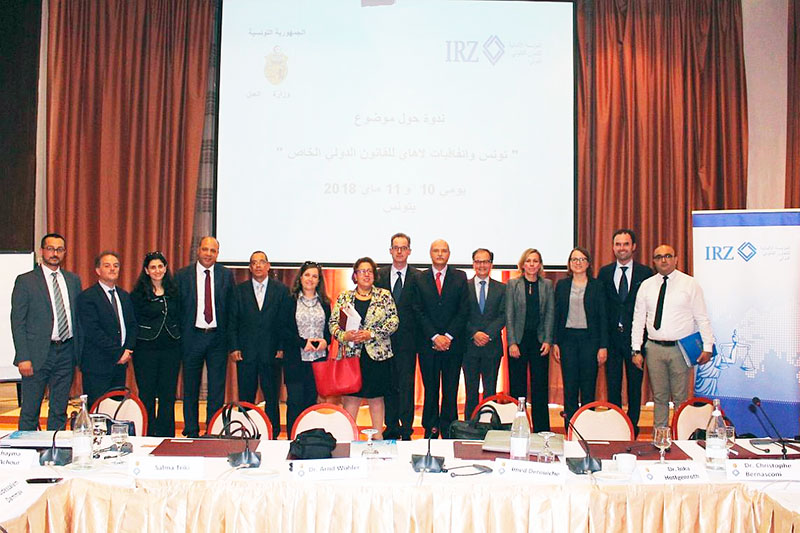 Experts at the conference in Tunis

The following subjects were discussed at the conference:

The following experts from the IRZ and the Hague Conference took part in the event:

Under the leadership of Prosecutor General Imed Derouiche, Head of the Judicial Service at the Tunisian Ministry of Justice, the experts discussed with their Tunisian colleagues various aspects concerning the practical application of the Conventions in Tunisia’s justice and administrative systems. The first major challenge will be applying the Conventions to national Tunisian legislation and case law. Under the conditions of the contract, Tunisia also has to determine the relevant legal and official structures for each Convention. This has not yet been carried out in all cases, which means that Tunisia’s accession to the Convention concerned has not yet been recognised by all member states.

During the two-day meeting in Tunis, however, potential solutions for many of the outstanding issues were discussed and some of the terms in the individual Conventions, which the Tunisians obviously found misleading, were clarified, such as the “usual residence of the child” in the case of the child abduction Convention.

During the conference, Imed Derouiche and Dr. Bernasconi repeatedly emphasised the highly topical nature of the subject and the perfect timing of the meeting, which took place immediately after the Apostille Convention came into effect in Tunisia on 30 March 2018. The Hague Convention on Private International Law is also celebrating its 125th anniversary this year.

Together with the Hague Conference, the IRZ provided active support for the process of Tunisia’s accession from 2012 until its membership in November 2014, with advice and expert discussions in Tunis, and it has continued to offer regular advice since then.