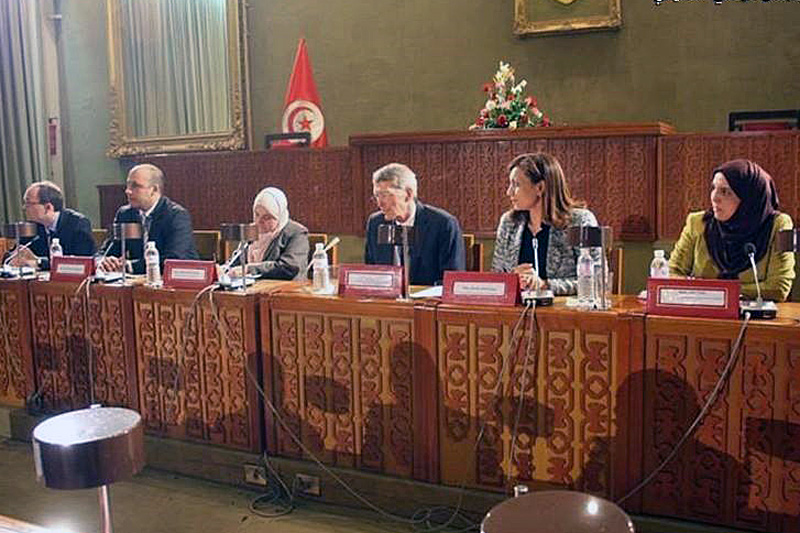 In January 2014 the Constituent Assembly of Tunisia adopted a new Constitution. The IRZ organised expert talks in Tunis in April 2014 in cooperation with the German section of the International Commission of Jurists (ICJ) in connection with the new Constitution and the associated reform efforts undertaken by the Tunisian Government. The German section of the ICJ is made up of professionals from all fields of legal activities. The fact that 40 German participants attended this event (among them the Federal Constitutional Court Judges Prof Dr Eichberger and Prof Dr Paulus) testifies to the importance that the German representatives attach to the reforms.

The expert talks conducted by the delegation started at the Constituent Assembly, where they met with the President of the Committee on Legal Affairs, Kalthoum Badreddine, and further representatives of the Constituent Assembly, where they held intensive talks about the development and implementation of the new Constitution. Following this the delegation was received by the Tunisian Minister of Justice, Dr Hafedh Ben Salah, where they discussed the challenges of transposing the new Constitution into law.

The visit was supplemented by a meeting with the President of the Administrative Court, Mohamed Faouzi Benhammed, as well as with other judges, where they discussed the competences, the functions and the relationship between the Administrative Court and citizens. Talks were also held with the President of the Bar Association, Prof Mohamed Fadhel Mahfoudh, and other members of the Bar Association.

The Commission of Jurists was also received by the German Ambassador, Dr Andreas Reinicke, who invited them to the German Embassy along with Tunisian guests from politics and society.