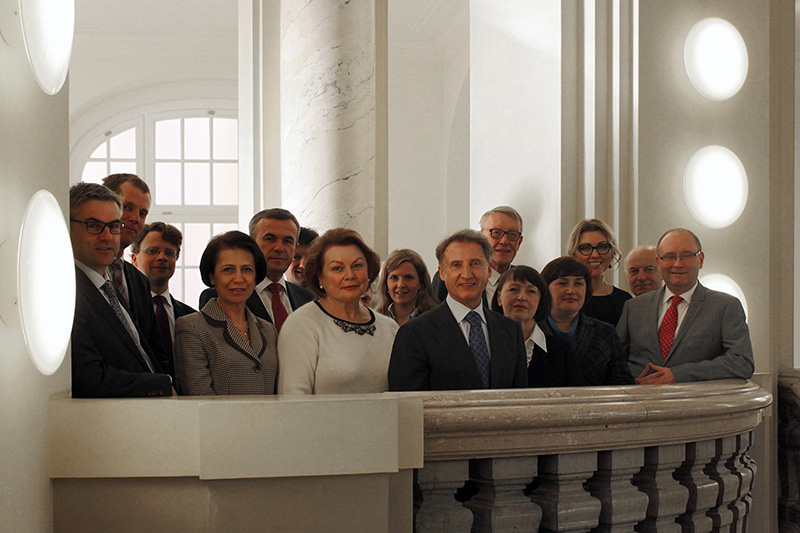 Working visit led by Mykola Onishchuk (front centre), Director of the Ukraine National School of Judges, on the topic of lawyers’ training in Germany, here at the Cologne Higher Regional Court

The Ukrainian State President established a Constitutional Commission in March 2015. Following the commencement of its work on human rights, decentralisation and justice, an IRZ expert supported the content of its work. No majority has yet been achieved in Parliament for the proposed amendments to the Constitution with regard to decentralisation due to contentious regulations for the areas Donezk and Luhansk, although amendments to the Constitution to reform the judicial system were passed at the start of June 2016 and entered into force on 30 September 2016. This took place at the same time as the new Act “On the Courts System and the Status of Judges”. In accordance with this, citizens can, after recourse to the courts has been exhausted, have the constitutionality of a statute which has been applied in particular proceedings reviewed by the Constitutional Court.

In addition, the intention is to create two Supreme Courts for Intellectual Property and Anti-Corruption cases by the end of 2017. From the start of 2017 onwards, the necessity of representation by a lawyer in court will also be introduced step by step. The independent administrative court system in Ukraine, which has existed since 2005, is now also anchored in the Ukrainian Constitution. At the start of October 2016, significant alterations to the enforcement law entered into force after preliminary work which in some cases lasted for years. In accordance with these, the institution of the private bailiff was introduced for at least some of the claims to be enforced, together with a register of debtors. Provision is also made for the possibility of accession to the Rome Statute of the International Criminal Court within three years.

The IRZ has already advised Ukraine on the subjects specified above over a long period, and numerous consultations in the reporting year 2016 were also devoted to these focal issues of constitutional and judicial reform. As changes already for the most part exist at the level of ordinary statutes, the decisive element will now be the drafting of subordinate legislative norms and their implementation in practice. The IRZ will therefore also continue its close support for Ukraine precisely in these areas in future.

Alongside this, cooperation with the Ukrainian administrative court system formed part of the agenda for 2016, as well as consultation on fighting corruption and practice-oriented further training for judges. Main cooperation partners were the Parliament, the Ministry of Justice, the Constitutional Court, the Supreme Court of Ukraine and the courts at different instances in the regions of Ukraine, the Supreme Administrative Court, the General Prosecutor’s Office and the National School of Judges, as well as the newly established National Anti-Corruption Bureau of Ukraine.

The IRZ likewise continued its successful cooperation with the National Ivan Franko University in Lviv for the promotion of young lawyers. The seventh annual course of the German-language supplementary introductory studies in German law has in the meantime begun.

The implementation of the constitutional amendments specified above in practice, not only in the field of the constitutional courts, but also in the entire judicial system, will certainly remain a major topic in the near future. In this context, the main issues will be the constitutional complaint, the new role of the Supreme Court, safeguarding the uniformity of case-law whilst maintaining the independence of the judiciary and issues of the disciplinary law of judges, the judgment system, the jurisdiction of the administrative courts, administrative procedure law, execution enforcement law and fighting corruption.

The IRZ will attempt not only to cooperate with judges, but also with the Supreme Council of Justice and academic staff. The IRZ’s work will continue to extend to the regions of Ukraine. The cooperation with the Ministry of Justice will receive particular attention. Cooperation with the Bar is also set to continue. If there is a need for consultation in the field of the preventative administration of justice by notaries, this can also be taken up following on from the work to date. Finally, the positive promotion of young lawyers with the study course at the University of Lviv will be continued.