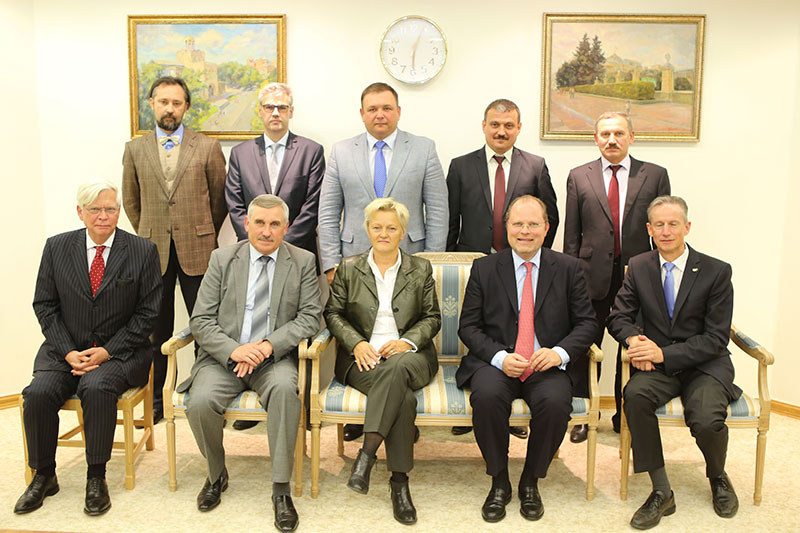 The rule-of-law development of Ukraine focused on constitutional reform in 2015. The Constitutional Commission which was established by the President for this purpose is broken down into working parties on human rights, decentralisation and justice.

Public interest also continues to centre on the efforts in the fight against corruption. After a comprehensive package of laws had already been adopted in the autumn of 2014 on the fight against corruption, civil society is now observing the establishment of the institutions in question, in particular of the National Anti-Corruption Office of Ukraine, as well as of the Specialist Anti-Corruption Public Prosecution Office.

The reform efforts remain overshadowed by the unresolved conflict in the East of the country, albeit the military conflicts have now become less intense. Ukraine also held local elections in the autumn, with the exception of the Eastern regions. Cooperation with the IRZ has re-intensified once more in light of the extensive reforms which have been launched.

This year too, the IRZ's consultation focussed on the project entitled "Promoting the rule of law in Ukraine", funded from the budget of the Federal Foreign Office, with its five pillars of constitutional law, the judiciary, criminal law, public law and administrative courts, as well as combating corruption.

Cooperation was primarily stepped up in constitutional reform, and has focussed within this area both on decentralisation and on judicial reform. Since an IRZ expert was included in the group of advisors on the decentralisation working group, the IRZ was able to provide considerable support here.

A major step is likely to be the introduction of the constitutional complaint, provided for in the constitutional draft, on which the IRZ immediately started consultation. The continuing support for the Ukrainian administrative courts, which celebrated their tenth anniversary in 2015, was continued amongst other things by means of regional seminars in Ukraine and by the annual colloquium held at Koblenz Higher Administrative Court.

The IRZ continued to promote young lawyers in 2015 with the conclusion of the fifth and the start of the sixth year of studies of the German-language supplementary introductory studies in German law at the National Ivan Franko University of Lvov. The IRZ was able to engage the Chairwoman of the Committee on Legal Affairs of the German Bundestag, Renate Künast, MP, to give the keynote speech on the occasion of the opening of the sixth year of studies. High-ranking discussions were also held in Kiev, amongst others by Christian Lange, Parliamentary State Secretary at the Federal Ministry of Justice and Consumer Protection, and Dr. Stefanie Hubig, State Secretary at that Ministry.

The reforms of the Constitution and in the fight against corruption will also determine cooperation in 2016.

It is to be hoped that the work on the draft Administrative Procedure Act, which came to a standstill in 2015, will be taken up once again. Codified administrative procedure law would be highly beneficial not only as a substantive law foundation for the case-law of the administrative courts, but also as an important step in the fight against corruption.

The German-language supplementary studies on the introduction to German law, which is in considerable demand, are to be continued.

The IRZ will continue to support Ukraine on its path towards rule-of-law reforms in 2016 through intensive and trust-based cooperation in many relevant legal fields.