The part of the constitutional reform relating to justice was adopted as recently as 2 June 2016. This provides, amongst other things, for the introduction of individual constitutional complaints, which can be perceived as a significant step in the development of the rule of law in Ukraine.

Ukrainian delegation on a working visit to Bonn, Cologne and Düsseldorf to learn about legal training

From 4 to 8 April, a high-ranking Ukrainian delegation is visiting Germany to find out about legal training in Germany. The IRZ organised the working visit along with USAID (US Agency for International Development).

The delegation includes Verhovna Rada representatives, Dmytro Storozhuk (justice committee) and Liliia Hrynevych (education committee), and representatives of the Ministry of Education and Justice as well as of well-known Ukrainian universities and law academies. As a member of the Supreme Judicial Council, Professor Andriy Boyko joined the delegation. The former Minister of Justice for Ukraine, Serhiy Holovaty, who is currently a member of the President's Constitutional Commission, also took part in the working visit.

IRZ Managing Director Veronika Keller-Engels welcomed the guests to the IRZ. The programme focussed in particular on expert discussions about state law examination procedures at the state office for law examinations for the North Rhine-Westfalia region in Düsseldorf and on a welcome by Vice-President Christian Schmitz-Justen to the Higher Regional Court of Cologne, followed by expert discussions on procedures for legal internships.

The guests had already talked with the former president of the Higher Regional Court, Johannes Riedel, on selecting, recruiting, assessing and promoting judges, and spent half a day in intense expert discussions with Professor Martin Böse at the Juridicum in Bonn. The delegation also learned about bachelor's and master's courses in economics and law at TH Köln (University of Applied Science of Cologne) and about revision courses in law during another meeting.

This delegation visit follows on from the working visit made by representatives of the National School of Judges of Ukraine, which - as already reported - took place in mid-March. In view of the constitutional reforms that are currently underway in Ukraine, legal training and case law play a significant role.

Delegation representing the National School of Judges of Ukraine on a working visit to Trier, Cologne and Düsseldorf 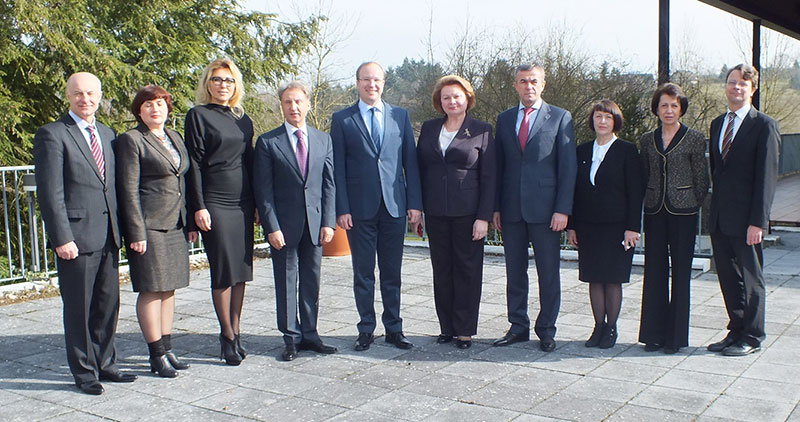 The Ukrainian delegation in Trier with Stefan Tratz (in the centre of the photo), Director of the German Judicial Academy, and Wolfram Hertig from the IRZ (on the right)

From 14 to 18 March, a delegation representing the National School of Judges of Ukraine visited various judicial training centres in Trier, Cologne and Düsseldorf. The delegation was led by the Rector of the School of Judges, Mykola Onishchuk, who was Minister of Justice for Ukraine from 2007 to 2009. Other participants in this working visit included Zenovii Kholodniuk, Director of the Ukrainian State Judicial Administration, and Valentyna Ustymenko, a member of the High Judicial Qualifications Commission.

The expert discussions were opened by the Director of the German Judicial Academy, Stefan Tratz, who welcomed the guests to Trier and presented the German model of judicial training. The delegation then went on to learn about the basics of German legal training at the University of Cologne. The welcome speech for the talks in the Ministry of Justice for the North Rhine-Westphalia region of Germany was delivered by Secretary of State, Karl-Heinz Krems, and Ulrich Becker, President of the regional Law Examinations Board. The focus of the talks at the Ministry of Justice was on the issue of selecting, recruiting and promoting judges and also on procedures for state law examinations. 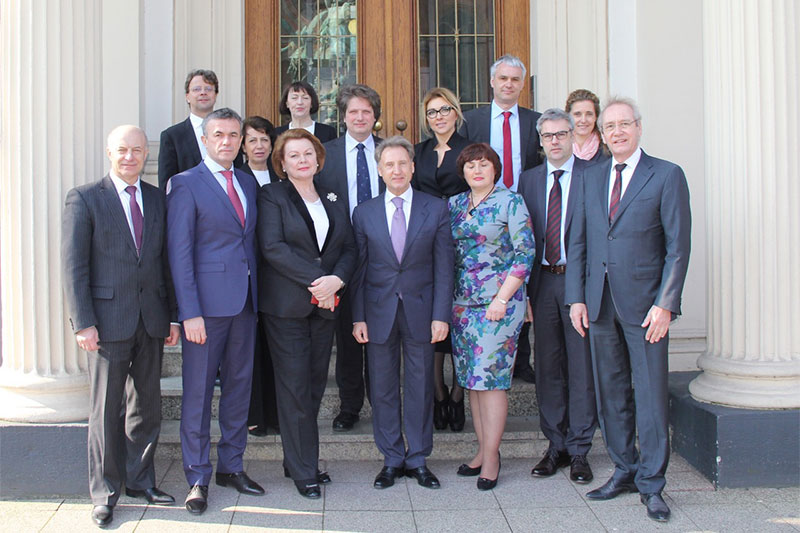 The Ukrainian guests with delegation leader, Mykola Onishchuk (front centre) and the President of the regional Law Examinations Board, Ulrich Becker (front right), in front of the Ministry of Justice in Düsseldorf

These subjects, as well as a particular focus on legal traineeships (the German "Referendariat"), were also on the programme during the subsequent intensive full-day expert discussions at the Higher Regional Court of Cologne. There, the representatives of the Ukrainian justice system were welcomed by the President of the Court, Peter Kamp, and Vice-President Christian Schmitz-Justen.

In view of the intense constitutional reforms that are currently underway in Ukraine, legal training and case law - including in connection with the issues of selecting and promoting judges - are a high priority. The working visit to Germany provided plenty of inspiration in this respect.