Expert discussions on municipal law were held in Lviv from 7 to 9 December, led by IRZ expert Dr. Hendrik Hoppenstedt, member of the German Bundestag (MdB) and member of the Committee on Legal Affairs and Consumer Protection of the German Bundestag. The event, which was organised by the IRZ, handled issues concerning municipal law and changes to the constitution regarding plans for decentralisation.

Following an opening lecture by Dr. Hoppenstedt on "The federal structure of the German Constitutional law: strengths and weaknesses", the first day of the event at the National Ivan Franko University continued with talks with the Dean of the law faculty and the Vice-President of the university, as well as with participants from the IRZ supplementary course on German law.

The second day was devoted to expert discussions with local parliamentarians. Dr. Hoppenstedt was a guest at a round table with community representatives from the city of Lviv and from various communities in the region. In connection with the current draft changes to the Ukrainian constitution involving decentralisation, the current organisation of municipal services and the issue of administrative services as a whole were discussed.

To look further into this issue, IRZ expert Dr. Hoppenstedt went on to meet the Chairman of the Lviv City Council, Anatolij Zabarylo, and the Deputy Chairman of the Regional Council of Lviv, Volodymyr Hirnjak, both of whom took up their posts after the recent municipal elections. 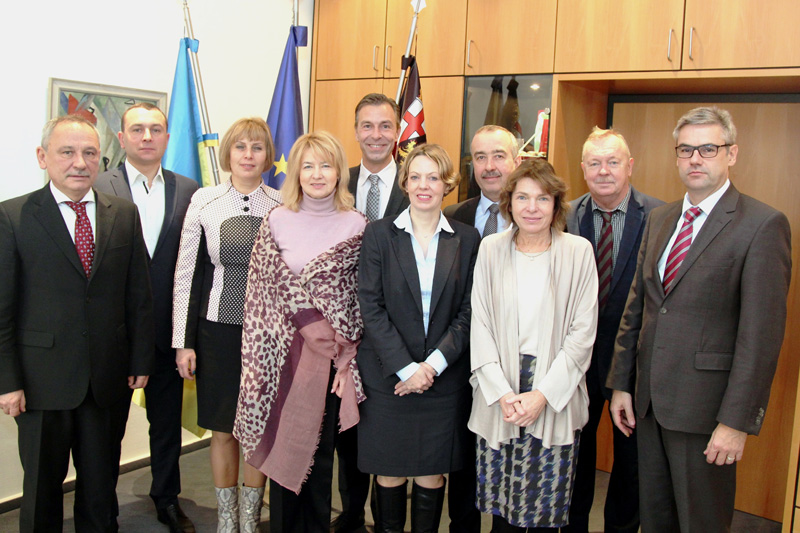 The Ukrainian delegation with their German hosts in Koblenz

The 11th Colloquium on administrative procedure law for Ukrainian administrative court judges began in Koblenz on 7 December. The Ukrainian delegation was welcomed by the President of the Constitutional Court and of the Higher Administrative Court of the Federal State of Rhineland-Palatinate, Dr. Lars Brocker (back row, centre), and by the Director of the IRZ, Veronika Keller-Engels (front row, 2nd from left).

Since Ukraine may well introduce constitutional complaints as part of the changes to its constitution, experiences gained in Germany in this respect will also be discussed during the colloquium. The Ukrainian guests will therefore be able to gain a direct insight into the daily judicial work of their German colleagues.

In addition to these expert talks, to mark the occasion of Human Rights Day, there will be another meeting in Mainz with the Minster of Justice for Rhineland-Palatinate, Prof. Gerhard Robbers, and the President of the Landtag, Joachim Mertes.

Delegation of the Supreme Court of Ukraine visiting Karlsruhe and Leipzig

From 26 to 29 October a delegation of the Supreme Court of Ukraine, headed by its President Yaroslav Romaniuk, came to Karlsruhe and Leipzig on a working visit. The President of the Federal Court of Justice, Bettina Limperg, received the Ukrainian judges of all four senates on the second day of the visit to hold expert talks focussing on the consistency of case law.

In Karlsruhe, the delegation was also welcomed by the new Public Prosecutor General, Dr. Peter Frank, who presented his agency and discussed general issues of public prosecution with his guests taking account of the current reform of the Ukrainian public prosecutor's office. Another item on the agenda was the visit to the Federal Administrative Court in Leipzig. Here, the consistency of case law and the cooperation of the Federal Constitutional Court and other Supreme Courts was again a crucial topic. Given the fact that Ukraine has had an administrative jurisdiction for ten years, the German hosts emphasized its importance and particular role in the German legal system. The meetings in Karlsruhe and Leipzig also offered the opportunity to exchange opinions with the Ukrainian colleagues about the current judicial reform. A new court constitution law was adopted in Ukraine in February this year, and also the Constitutional Committee of the President is dealing with the reform of the judiciary in one of its working groups within the current constitutional reform.