On 17 and 18 September, a visit was made to Ukraine by Parliamentary State Secretary to the Federal Minister for Justice and Consumer Protection, Christian Lange (MP), Chairman of the Committee on Legal Affairs and Consumer Protection in the German Bundestag, Renate Künast (MP), and acting Director of the IRZ, Dr Stefan Hülshörster.

The programme for the visit included a meeting with Oxana Syroid, Vice-President of the Ukrainian Parliament (Werhowna Rada), and other Members of Parliament in Kiev. Talks were also held with the President of the Constitutional Court of Ukraine and of the Supreme Court of Ukraine and with representatives of some NGOs and international organisations.

The delegation learned about constitutional reform, in particular within the context of efforts towards decentralisation, about the difficulties involved in the fight against corruption, about legal reform and about the verification of all those working in public services, which is connected with all of the above points and is known in Ukraine as "lustration". Parliamentary State Secretary Mr Lange also highlighted during the talks the many years of intense efforts by the German government to accompany and support the legal reform process in Ukraine by the IRZ.

As part of the visit programme, Renate Künast opened the sixth German language "Introduction to German Law" course at the Ivan Franko National University of Lviv, which was initiated by the IRZ at the German Law centre it founded at the university. Talks were also held here with the Mayor of the City of Lviv, Andrij Sadovyi, founder of the "Samopomich" party.

The IRZ has been offering advice in Ukraine for several years now in all of these areas and these discussions also resulted in numerous connections being made to support the continuation and intensification of this cooperation.

Between 3 and 7 May 2015 we welcomed three acting Constitutional Court Judges from Ukraine, Professor Viktor Shyshkin, Professor Petro Stetsiuk and Professor Ihor Slidenko, at the IRZ's premises for three days of intensive expert talks. The focus was on the doctrine of constitutional law and reviews of members of the civil service and the judiciary.

The Ukrainian guests discussed constitutional control during a state's democratic transformation, control density of procedures and the role of a Constitutional Court as an essential factor in the political field with their German counterparts, Dr Dieter Hömig, retired judge at the Federal Constitutional Court, and Dr Matthias Hartwig of the Max Planck Institute for Comparative Public Law and International Law. The talks focused on safeguarding judicial independence and steadfastness as well as on the question of how judicial self-confidence can be reinforced.

Another issue was the question of how to deal with the increasing influence of international law, and the impact of ECHR case law on the rulings of the Ukrainian Constitutional Court. This was of particular relevance, since it can be assumed that many of the imminent judicial reviews of so-called "lustration procedures" will have to be heard before the Ukrainian Constitutional Court and the ECHR. This is the reason why another focus of the talks was the question whether the reviews of an estimated 500,000 members of the civil service and the judiciary, many of whom have already been dismissed from public service, are lawful and proportionate. These reviews are currently being carried out in Ukraine on the basis of an "act on the consolidation of state power".

The guests from Ukraine held extensive and in-depth discussions with Under-Secretary Thomas Kunz from the Thuringia Ministry for Migration, Justice and Consumer Protection, who was himself in charge of matters relating to reviews of members of the judiciary in the former GDR, and Professor Thomas, retired Under-Secretary of the Federal Ministry of Justice and Consumer Protection, who was involved in negotiating the Unification Treaty, about the German experience after reunification with regard to reviews of judges and public prosecutors. The above-mentioned "act on the consolidation of state power" has already entered into effect, but it is currently being reviewed, following criticism from the European side. The IRZ also gave its opinion on this issue, as well as the Venice Commission. As a result, the proceedings regarding this act which were pending before the Ukrainian Constitutional Court have apparently now been suspended. To that extent the IRZ will not let up in its efforts to ensure that these reviews, which are definitely necessary in the Ukraine, are conducted according to rule-of-law standards. 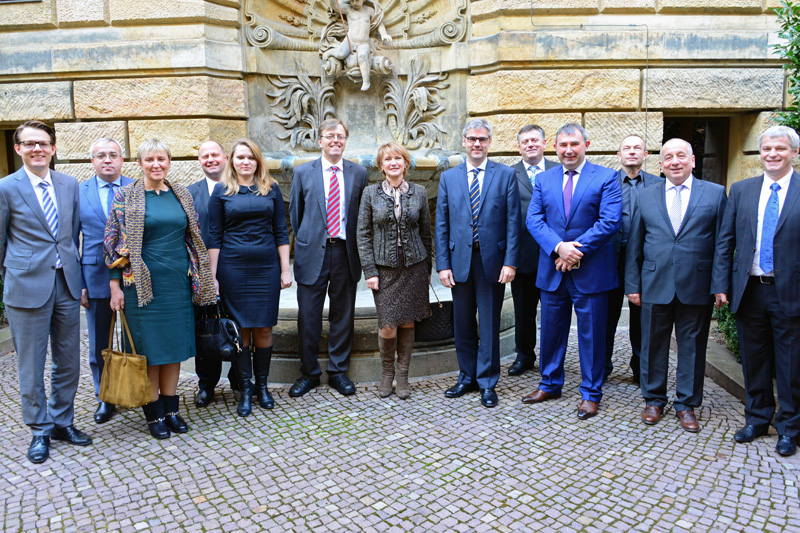 Based on its more than 20 years of cooperation, the IRZ is implementing a five-pillar programme to promote the rule of law in Ukraine, supported by the Federal Foreign Office. Despite the extremely difficult domestic and international political conditions, the implementation of the programme has already been started. The programme covers issues of the constitutional and judicial reform, public law and criminal law as well as the fight against corruption, above all in the judiciary. The working visit of the representatives of the Supreme Administrative Court of Ukraine, which took place from 25 to 28 November 2014, also continued a long-standing cooperation in establishing an administrative jurisdiction in Ukraine. Issues of protecting judicial independence and the necessary consolidation of an understanding of real independence by all parties played an important role during the expert talks, in particular against the background of the experiences gained in recent years and the current reform efforts.

In this context, the highly topical problem of the so-called lustration of civil service members and the judiciary as a whole were discussed. The judiciary will be reviewed as of early December 2014, including the Supreme Administrative Court, based on the requirements of the respective law. This review is certainly necessary in many cases but still has to be carried out in a reasonable way, bearing the principle of proportionality in mind. Another topical aspect was the effort of some forces in Ukraine to dissolve the administrative jurisdiction again and to integrate it into ordinary jurisdiction. An integration of commercial jurisdiction may be expedient; the dissolution of the administrative jurisdiction, however, which has been in existence for about a decade, would have to be considered as a drawback. Rather, more attention should be paid to developing the administrative courts further into an instrument capable of effectively and efficiently reviewing the activities of the state. For this purpose, they have to be truly independent and under no external influence at all, in order to contribute to a law-abiding conduct on the part of the executive.

The delegation was headed by the Court President Mr Netschytailo, who was only re-elected in June this year. They were received by the Vice-President of the Federal Administrative Court Dr Christ and the IRZ Deputy Director Dr Hülshörster. The meetings were also attended by the Presiding Judges Prof Dr Rubel and Mr Neumann as well as the Judges Prof Dr Kraft and Mr Steinkühler.