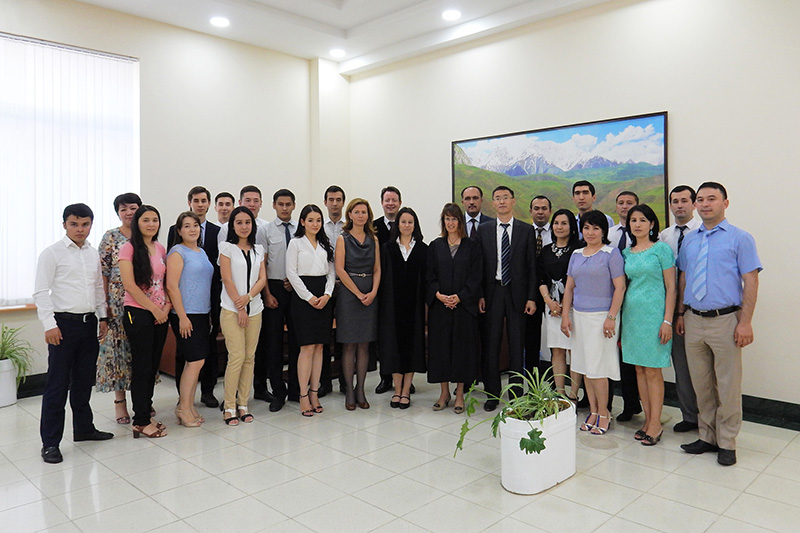 Moot Court on civil law and civil procedure law for students of the State Law University of Tashkent with Esemurat Kanyazov (front, 5th from right), Chancellor of the University and former First Deputy Minister of Justice

As a result of numerous legislative amendments and personnel changes, the interaction between the state organs of Uzbekistan has to be realigned on a regular basis. The country’s leaders are implementing a development model which initiates political and economic reforms whilst maintaining internal political stability. Consultative support in the legal sphere encompasses various projects in the legislative field and the judicial system. In this context, German commitment aims to promote the development of a legal system which follows principles of the rule of law in all spheres. One of the country’s greatest strengths is its young population, which has grown steadily in recent years, so that the extension and improvement of education opportunities and the promotion of young people – including in the field of the courts and the judicial system – is particularly important.

Bilateral cooperation with the Presidential Institute for Monitoring of Legislation continued in the reporting year in an atmosphere of mutual trust.

The focus of advice was on investment law and arbitration. Specialist dialogue originating from the previous year was deepened during a locally organised event and a study trip to Germany in 2016. The discussions locally once again focused on the ICSID (International Center for the Settlement of Investment Disputes) proceedings, in which Uzbekistan participates. In particular, the ICSID was grateful for the practical recommendations from the German experts on the preparation and implementation of proceedings before the ICSID. The study trip to Germany offered the representatives from the Uzbek Ministry of Justice the opportunity to exchange experience with internationally experienced lawyers and the German Institution of Arbitration (DIS), which in turn is very interested in the establishment of Germany as an arbitration forum and the strengthening of international contacts. Overall, Uzbekistan needs more appropriately trained lawyers for its development as a place for investment and the handling of investment projects.

In the field of legal training, the IRZ organised a civil law moot court together with the professors and students of the Tashkent State Law University. The application of procedural law and substantive regulations were taught within the framework of simulated proceedings before a civil court. Here, the roles of judge, lawyers and parties were allocated amongst the German and Uzbek participants and prepared in advance. The excellent motivation and commitment of the Uzbek students is particularly noteworthy here. The exercise was successful in demonstrating the course of proceedings, in particular the hearing of and evaluation of the evidence in a comprehensible way and subsequently discussing it with a comparison of laws.

Advice on the notarial system, which has been given for several years, was continued with an event in Bukhara. The continuity of the specialist contacts and endeavours by the Uzbek side to also involve colleagues from remote regions in the international exchange can be assessed very positively. The impression was that the Uzbek side wishes to use German standards as a yardstick in particular for the introduction of electronic registers in the notary system.

The Public Prosecutor’s Office in Kiel organised a one-week internship in cooperation with the IRZ for a delegation of the General Prosecutor’s Office of the Republic of Uzbekistan, thereby enabling participants to gain an insight into the work of a German investigative authority and the criminal investigation department of a federal state. The specialist discussions offered a forum for exchange about highly topical cross-border problem constellations such as the fight against terrorism and cybercrime. In addition, experience in preventing and fighting corruption were discussed with great interest. At the same time, the Uzbek public prosecutors saw the daily work of a German public prosecutor. In this context, particular attention was paid to the use of modern information and communication technology, including internal software for file management and other electronic instruments used in investigative proceedings.

The IRZ will continue to coordinate the main focal topics with the Presidential Institute for Monitoring of Legislation in 2017. The existing cooperation with the Ministry of Justice, including its structural unit of the State Law University, will be involved in the joint planning Investment protection law, arbitration and legal basic and further training remain highly relevant topics and will be developed further, in particular with reference to practical experience. The fruitful cooperation with the General Public Prosecutor’s Office will be continued with the support of the Kiel Public Prosecutor’s Office by a practice-oriented one-week internship for another delegation.