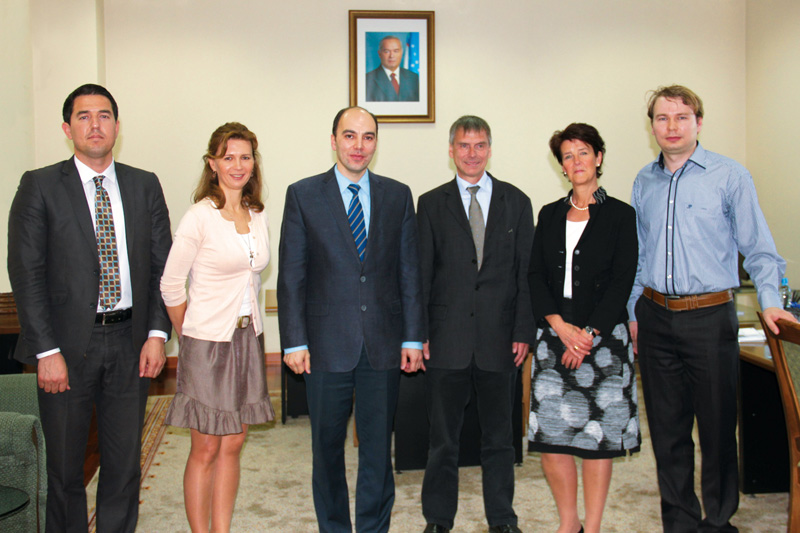 Discussions with the Institute for Monitoring of Legislation in Tashkent with Farrukh Mukhamedov, Head of the Institute (3rd from right), and Birgit Grundmann, State Secretary at the Federal Ministry of Justice and Consumer Protection, ret. (2nd from right)

The Strategy for Central Asia, launched by the EU in 2007, forms the foundation for the work of the IRZ in Uzbekistan, one of the most important states in the region. The most meaningful domestic policy events to take place in Uzbekistan in 2014 were the parliamentary elections, which were held in December. Despite some criticism by international election observers as to the implementation of electoral legislation, some positive changes can be observed. Efforts to strengthen Parliament have been seen, for instance to consolidate the scope of responsibility of the Members and their competences. There are furthermore efforts to advance the democratisation of state power through the institution of parliamentary review. In this context, the rising voter turnout is an unmistakeable sign of increasing political and societal maturity in Uzbekistan.

Large numbers of economic and legal projects are taking place in Uzbekistan with international partners, and with Germany in particular. The dialogue with Uzbekistan focuses on the circumstances for trade and investment, which have been difficult for years, and regularly also on the sustainability of the democratic and rule-of-law changes, as well as human rights issues. Germany is committed to specifically promoting sustainable economic development in Uzbekistan. German and EU projects in the judiciary and in the court system are complementary in terms of their objectives. For instance, the implementation of the large-scale EU project on the modernisation of the administration of criminal law “Support to Criminal Judicial Reforms”, managed by the IRZ, made a major contribution towards achieving this. Apart from the IT component, which was extended by one year, the project was completed in 2014.

The IRZ has been working bilaterally with the Ministry of Justice in recent years, and since 2013 with the Institute for Monitoring of Current Legislation under the President. The IRZ has been able to expand the exchange with the latter to include academics. Support in data analysis and academic support within the legislative procedure formed the central topic of a twoday conference in Tashkent. Representatives from the legislature, Academia and education took part in the debate on the optimum preparation and processing of research data while making use of modern communication technologies at all stages of the legislative procedure. At the first joint conference organised with the State University of Law of Tashkent, the lectures and discussions focussed on improving legal training by making it more practical, as well as expanding students’ scientific analysis skills. The conference made a constructive contribution towards the topical debate on qualifying human resources.

The IRZ will continue to work closely with the Institute for Monitoring of Current Legislation under the President, as well as with the Ministry of Justice, in 2015. In addition to the continuation of the cooperation on the previous key topics, joint activities are planned to take place in the field of civil and commercial law, in particular on the law on investment and on arbitration jurisdiction. In view of several sets of international arbitration proceedings that are pending with participation of Uzbekistan, the focus will be particularly placed on consultation services with a practical relevance.

The IRZ would furthermore like to involve the legal profession in the German-Uzbek expert dialogue. Strengthening the role and the independence of the lawyers and the further development of the professional law related thereto is indispensable for a rule-of-law-orientated legal system and an effective judiciary. There are still some shortcomings in this regard in Uzbekistan, so that there is a need for exchange with experienced experts from home and abroad.