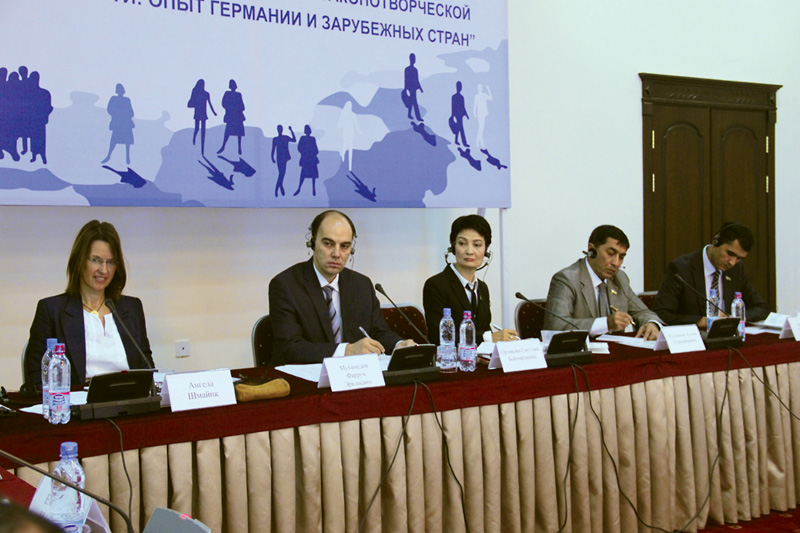 Conference on social legislation in Tashkent

Large numbers of reform processes are continuing to be launched in Uzbekistan in the legal field. For this reason, the expert dialogue with the Uzbek partners focuses on rule-of-law topics, on effective legal protection as well as on well-functioning administrative and judicial structures, and above all on human rights issues. Uzbekistan is endeavouring to consolidate cooperation with international partners. Germany is one of the most important partners of the Republic of Uzbekistan in the EU, and this expresses itself in the large numbers of cooperation projects in the legal and commercials fields. In the implementation of the EU Strategy for Central Asia, Uzbekistan takes on a major role in the region. Germany continues to be in favour of the continuation of a critical dialogue with the objective of continuing sustainable democratic change and improving the human rights situation. A contribution is made by the EU project entitled "Support to Criminal Judicial Reforms", a complex project to modernise the administration of criminal law which has been implemented with other European consortium partners under the leadership of the IRZ since 2011.

The IRZ will continue to support Uzbekistan on its ambitious path towards the rule of law and democracy as well as in the implementation of international legal standards with the objective of providing sustainable consultation, in particular in the reform of statutes. The interest in legal consultation by German experts and in a practical exchange pertains uninterrupted, so that the IRZ is following on from the results that have been achieved here and is continuing the trust-based modus operandi with the previous partners.

The IRZ will coordinate the strategic foci for the joint measures in concord with the Institute for Monitoring of Current Legislation under the President. The existing cooperation with the Ministry of Justice will be incorporated into this structure. The IRZ will focus on the quality of legislation and expand consultation in this field. Furthermore, it will include current topics, such as the law on investment protection and judicial basic and further training. Moreover, German experts are to help draft the new provisions on administrative procedure. The IRZ will make the results of the legal dialogue accessible to a broader public through publications and a specialist journal.