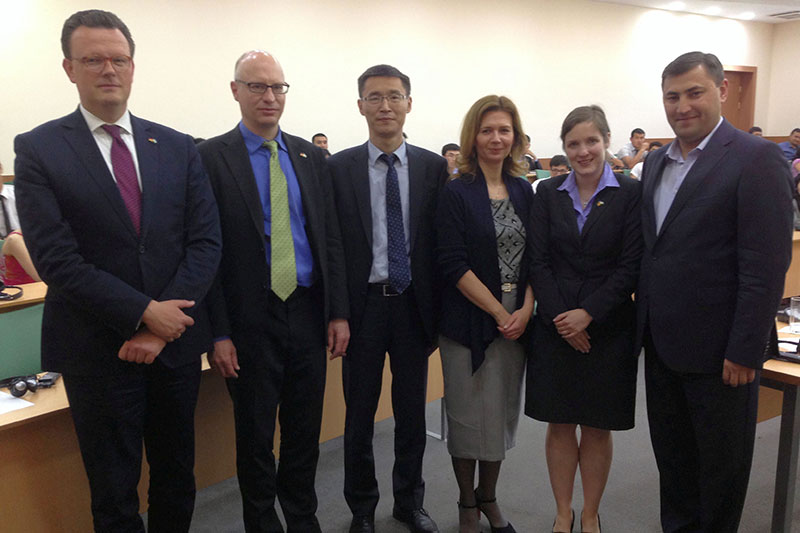 Seminar on investment law and arbitration in April in Tashkent

President Karimov, who had been in office since 1989, was confirmed as President as expected in the presidential elections which took place in March. This means that important powers remain focussed on the President, and the executive is highly centralised.

Uzbekistan would like to strike a balance between ensuring stability and controlled reform. The establishment of a democratic rule of law with a sustainably-developing economy, and the shaping of an open civil society, should be promoted with international support.

The IRZ understands German-Uzbek cooperation in the legal sphere as constituting a contribution towards promoting democratic change and establishing structures that are orientated in line with the rule of law. The security situation grew worse after the presidential elections, thus slowing cooperation.

The project work in Uzbekistan focuses on providing support for judicial and court reforms. The breadth of the measures here ranges from activities in the legislative area to advising on the modernisation of basic and further legal training. As in previous years, cooperation was implemented in coordination with the Presidential Institute for Monitoring of Current Legislation.

At the suggestion of the Uzbek side, the IRZ held its first seminar on the law on investment and on arbitration tribunals in Tashkent. The enquiry came because there are no thoroughly-drafted investment protection agreements and there is a lack of expertise among the Uzbek authorities. Since this necessitates considerable regulation in practice, the IRZ has taken up this concern and provided the appropriate know-how in the shape of German experts.

Furthermore, an event is to be emphasised that was carried out in Tashkent with the Supreme Court of the Republic of Uzbekistan, at which civil procedure law was addressed in all its breadth. Since the procedure in contentious civil court proceedings in Uzbekistan is essentially comparable to that under German civil procedure law, it was possible to discuss individual deviations, as well as approaches towards further development. The role-play of a German court hearing by the German delegation proved to be particularly illustrative and beneficial to the discussion. This enabled the Uzbek side to determine where the structural differences lie in terms of the rules of procedure and different system definitions, and to make many enquiries with regard to the subject-matter.

The IRZ will continue cooperation with the Institute for Monitoring of Current Legislation under the President with the involvement of the Ministry of Justice, of the Supreme Court, of the Office of the Public Prosecutor General and of other institutions in 2016. The joint events will be focussed in the field of civil and commercial law, in particular the law on investment and arbitral tribunals, as well as civil procedure law. Particular attention will be devoted to consolidating the exchange by dealing with practical aspects and legal cases, for instance in the shape of workshops and moot courts.