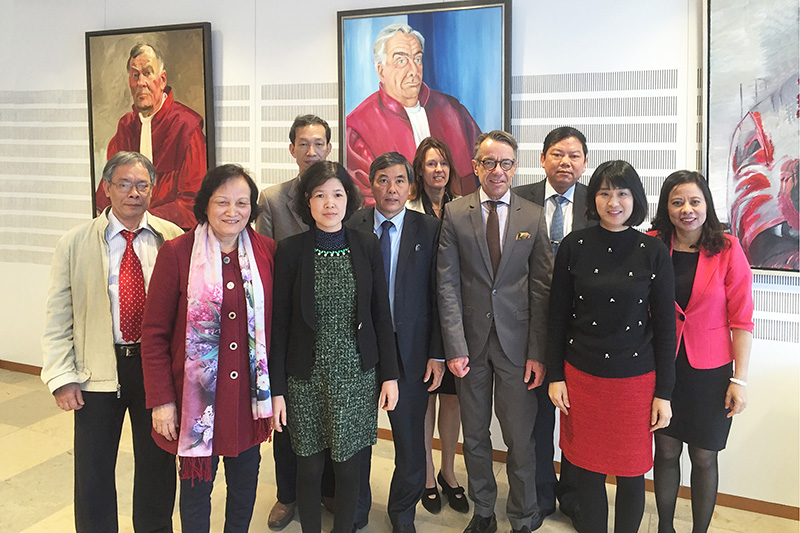 The IRZ works together with different partners in the judicial system on a consistent basis, the legal training facilities and academia. The legal reform processes in Vietnam are extremely dynamic. Reform projects are constantly being started as a result of the entry into force of the new Constitution in 2014 and the intended harmonisation and renewal of the legal and judicial systems.

The development of the rule of law is considered very important and is discussed with great interest with the German partners. The IRZ regularly takes this up and realises corresponding consultation projects with different partners in the light of experience to date.

The Vietnamese Ministry of Justice remains an important cooperation partner, with which two workshops were carried out in 2016. The Academic Legal Research Institute of the Ministry of Justice invited Vietnamese experts from academia, parliament, the government and civil society to discuss the foundation of the National Institute for Human Rights with German colleagues. The remarkably open debate dealt with the Vietnamese understanding of the state separation of powers and the breaches of human rights tolerated by the state.

The other event involved an exchange of experience on juvenile criminal law, which is not the subject of a separate code in Vietnam but is increasingly being developed in practice and the importance of which is underlined by a first specialised court in Ho Chi Minh City.

The Judicial Academy, which works within the Ministry of Justice’s sphere of business, is a long-term partner of the IRZ. It is the central legal training agency for young lawyers from the groups of judges, the Public Prosecutor’s Office, the Bar, notaries and other legal professions. The IRZ continues to focus on practice-oriented measures for young lawyers, because legal basic training in Vietnam is in need of improvement, in particular in view of preparation for professional life.

In cooperation with the Judicial Academy, a seminar was conducted for the second time on case resolution methods, in which teaching concentrated on dealing with facts and circumstances with the aid of subsuming and relational techniques as well as various methods. High demand has prompted the printing of a corresponding handbook, which can also be used as a reference textbook for young lawyers outside the seminars, not only in Vietnam.

A moot court (simulated court proceedings) was also conducted together with the Judicial Academy, an annual occurrence since 2013. Following the conduct of these moot courts for civil law, criminal law and administrative law, it can be said that the Vietnamese side regularly paid the greatest attention to the law of evidence as regards investigation, evaluation, admission and use in court. In addition, a further focus was on questioning and hearing technique in dealing with witnesses.

One focus of the IRZ is on strengthening human rights in Vietnam. In the reporting year, the IRZ once again continued its cooperation with the Vietnamese Institute for Human Rights (VIHR), which has been in place since 2011. The project conceived for this purpose in order to strengthen protection for human rights and fundamental rights in Vietnam through the rule of law and an independent judiciary by a study visit to Germany and a comparative law conference in Ho Chi Minh City was supported by funds from the Federal Foreign Office.

Visits to different German institutions showed how the principles of the rule of law which were discussed are specifically implemented in practice in Germany and how central institutions for the protection of human rights fulfil their function. The highlight of the stay was a visit to the Federal Constitutional Court, which is of particular interest in Vietnam because such specialised court jurisdiction does not exist there, but is regularly discussed.

The Vietnamese Bar regularly approaches the IRZ with a request to support lawyers in the exercise of their profession. Workshops in Hanoi and in Ho Chi Minh City were organised, as well as a study trip to Berlin. Focus was placed on the conduct of proceedings, the production of evidence in criminal proceedings, and questioning and interrogation technique – most notably with regard to the re-enacted Code of Criminal Procedure, which will enter into force in 2017.

Further activities in the field of criminal law were realised together with the Supreme People’s Prosecution Office through the organisation of a seminar in Ho Chi Minh City on fighting cross-border crime.

Business law topics were the subject of the seminar on commercial arbitration and international investment arbitration with the Ho Chi Minh City Law Office. South Vietnam is the country’s central economic region and attracts numerous foreign investors. Binding regulations are therefore necessary for the many investment projects. Consequently, regulations for the structure and handling of contracts and for procedures for dispute resolution were the subject of the event.

The working programme of the rule of law dialogue up until April 2018 contains extensive advisory components in all the focal areas specified above, and the IRZ will also continue to implement projects in the German-Vietnamese rule of law dialogue. In view of the experience to date, practice-oriented and interactive formats are planned as far as possible in order to improve the application of the law in the different legal professions.