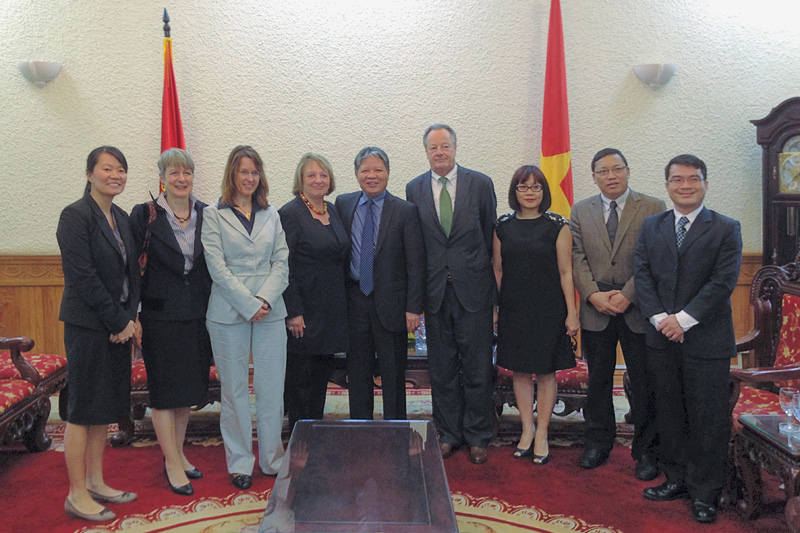 The IRZ has been carrying out measures since 2010 from the working programme on the German-Vietnamese rule-of-law dialogue which Germany and Vietnam have been maintaining since 2009.

The amendments to the Constitution, which were adopted by the National Assembly in November 2013, have attracted considerable attention in the recent past. This was preceded by a detailed debate, in which in particular large numbers of intellectuals and international observers took part. Since the new Constitution came into force on 1 January 2014, the State has launched many reforms in the judiciary and in legislation. They aim to renew the structures of the existing legal and judicial system. The associated reform projects strengthen and complement the strategic initiatives to realise the rule of law in all fields of law and in the judicial institutions. This process is accompanied by the expansion of a market economy as it is understood in Socialist terms and the goal of becoming an industrialised nation. These efforts entail large numbers of projects and activities in which German consultation is highly welcome and is frequently requested. The IRZ is a valued partner here, and is making efforts to support Vietnam in expanding rule-of-law structures.

The IRZ cooperates intensively with the Ministry of Justice, with which the Judicial Academy – a further cooperation partner – is affiliated. It is a central training institution for future lawyers, particularly providing training in the application of the law and preparing for professional practice. Moreover, the Supreme People’s Prosecution Office, the Supreme People’s Court, the Vietnam Bar Federation and the Institute for Human Rights are among the IRZ’s cooperation partners. The consultation provided by the IRZ covers civil, criminal, criminal procedure and constitutional law, as well as the administration of justice. With regard to the protection of human rights, since 2011 the IRZ has been organising regular legal comparison conferences with the Institute for Human Rights, which are promoted from the budget of the Federal Foreign Office and which facilitate an increasingly intensive discussion on the recognition and practical enforcement of human rights in Vietnam. The IRZ furthermore took part in 2014 in a trip to Myanmar and Vietnam within
the “Law – Made in Germany” initiative. Former Federal Minister of Justice Sabine Leutheusser-Schnarrenberger, the President of the BRAK, Axel C. Filges, its director, Kei-Lin Ting-Winarto, and the general counsel of the Association of German Chambers of Commerce and Industry (DIHK), Professor Stephan Wernicke, also attended. This journey was concerned with the mutual relations between the law and industry, creating an awareness of the advantages of the Continental European legal system and orientation towards rule-of-law principles. On the Vietnamese side, this exchange was attended by Minister of Justice Dr Ha Hung Cuong, the President of the Supreme People’s Court, Truong Hoa Binh, the Vice Minister for Trade and Investment, Ho Thi Kim Thoa, the Deputy Chairman of the Economic Committee in Parliament, Dinh Van
Cuong, the Chairman of the Vietnamese Chamber of Commerce, Dr Vu Tien Loc, and the Vice President of the Bar, Truong Trong Nghia. The agenda of this trip included attending a criminal hearing at the Supreme People’s Court, as well as a meeting with representatives of civil society.

The new work programme with the content of the German-Vietnamese rule-of-law dialogue for the three-year period from 2015 to 2017 is under preparation. The IRZ will offer events on constitutional, civil and
criminal procedure law, as well as on the administration of justice and on legal training. The goal remains to encourage and promote awareness of rule-of-law principles in legislation and in the application of the law by
continued cooperation with the previous partners.