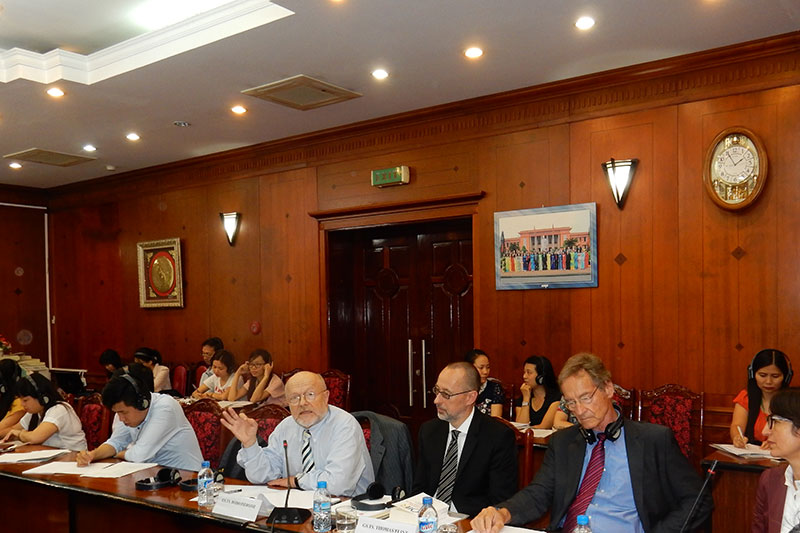 Legal comparison international conference on enhancing human rights and the independence of the judiciary from 8 to 10 September in Hanoi with the German speakers Prof. Dr. Bodo Pieroth, Dr. Thomas Flint (judge at the Federal Social Court) and Prof. Dr. Bernhard Schlink (from the left)

The IRZ is one of the supporters of the German-Vietnamese rule-of-law dialogue, and has been carrying out measures since 2010 from the working programme of the Federal Ministry of Justice and Consumer Protection and of the Vietnamese Ministry of Justice. This rule-of-law dialogue has been continued since the beginning of 2015 within a new three-year programme that is set to last until April 2018.

Against the background of the 40th anniversary of diplomatic relations between the two countries, this year was one of particularly intensive cooperation between Germany and Vietnam. Since the new Constitution came into force on 1 January 2014, there have furthermore been stepped up reform projects to standardise and revise the legal and judicial systems. What is more, Vietnam has the ambitious goal of developing to become an industrialised nation by 2020, which lends an additional impetus to the reform processes and leads to continual growth in the demand for German expertise. The IRZ remains a valued partner in this process, and is supporting Vietnam in continually expanding rule-of-law structures.

An important cooperation partner is the Vietnamese Ministry of Justice, which is leading the lion's share of the legal reforms. The IRZ furthermore works closely with the Judicial Academy, which is the central legal training agency for the practical training of lawyers in all professional fields within the remit of the Ministry of Justice. Particular significance therefore attaches to the Judicial Academy when it comes to basic and further training, in particular in the application of the laws. Cooperation with the Bar has become more important this year in order to strengthen the legal profession as an independent body of the administration of justice, as well as to improve the training of lawyers.

When it comes to improving the protection of human rights and of fundamental rights, there is still successful cooperation with the Institute for Human Rights, which belongs to the Ho Chi Minh City National Academy for Politics and Public Administration. The Supreme People's Prosecution Office and the Supreme People's Court are among the further cooperation partners.

Constitutional law/human rights and their enforcement

The working programme of the rule-of-law dialogue up to April 2018 contains extensive advisory components in all the abovementioned focal areas. The IRZ will also continue to carry out measures with the tried-and-tested project partners through the mutual exchange in order to bring about a heightened awareness of the principles of the rule of law in legislation and application of the law. In order to achieve sustainable success in consultation, the IRZ will also continue to place particular emphasis on the accompanying training of the respective legal practitioners.