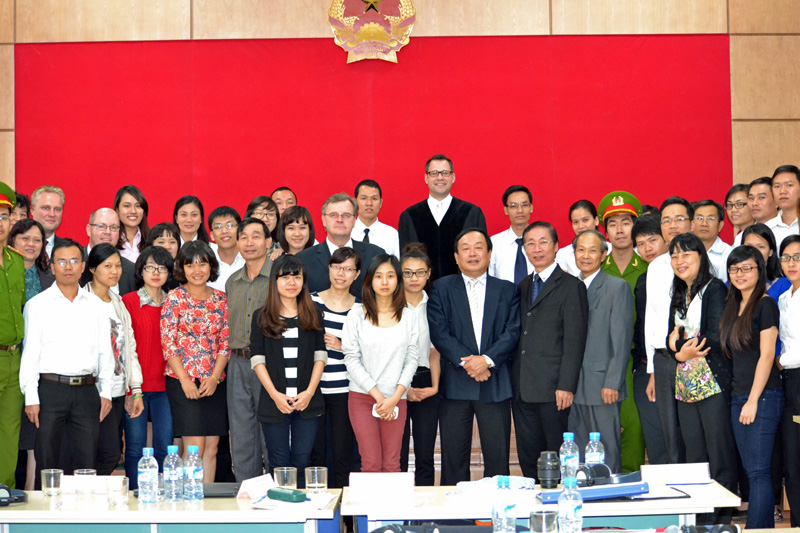 Group photo of the participants

The Judicial Academy of Vietnam is the central training institute for the specialised and hands-on training of the legal professions in Vietnam. It has now been cooperating with the IRZ for three years.

A moot court on criminal law was offered from 13 to 15 November in cooperation with the Vietnamese Bar Association. For this purpose, the Judicial Academy had prepared a case based on an actually committed offence. At first, the prospective judges and attorneys at law of the Judicial Academy simulated a trial in accordance with the Vietnamese procedural law involving two regular judges and three lay judges, a public prosecutor, a joint plaintiff, a defence counsel and several witnesses. The participants seemed to be well-prepared, the way in which the presiding judge acted showed that he was quite aware of his authority. It was particularly striking for the German participants that the indictment included investigative results, that the witnesses were interrogated jointly rather than individually and that a reply by the defence counsel and the joint plaintiff followed upon the public prosecutor's application for the sentence. Furthermore, the seating arrangements differed from the usual arrangements in Germany (e.g. the public prosecutor at the same level as the jury above the defence counsel and the joint plaintiff).

The trial was followed by a large number of students in the audience. Thanks to the excellent simultaneous interpretation the German experts, Prof. Dr. Robert Esser (University of Passau), Dr. Jan Orth (judge at the Regional Court of Cologne), the criminal defence lawyer Otmar Kury and Johannes Rochner (research assistant at the University of Passau), were also able to follow the trial.

To illustrate the different procedures, the German experts subsequently re-enacted part of the hearing in which the presiding judge mainly interrogated the accused in detail in a friendly but distant manner. Furthermore, an expert and a witness were heard, and the defence counsel filed motions to take evidence. Also the seating arrangements were changed to meet the German understanding so that the prosecutor and the accused with the defence counsel were seated opposite each other.

The respective procedures were lively commented and discussed during the subsequent discussions. It seems that the differences are to a large extent due to the fact that the existing procedural regulations are not applied in Vietnam, for instance it is not usual for a witness to be interrogated more than once since this incurs further costs and organisational efforts. The judge decides about the hearing of witnesses on a case-to-case basis, and it is common practice to interrogate a witness in the presence of the other witnesses. In Vietnam trials are frequently delayed (tracking down witnesses appears to be too time-consuming) and the evaluation of evidence poses big problems. Furthermore, complaints were raised that many judges are not sufficiently qualified. On the part of the attorneys at law it was pointed out that they were in many cases not able to enforce their rights as defence counsels.

This first experience has shown on which points the Judicial Academy focuses in the practical training and that there is potential for similar projects in the further cooperation.