The intensive Rule-of-Law Dialogue between Germany and Vietnam was extended by three years in April by a new agreement.

On 14 April 2015, the Parliamentary State Secretary, Mr Christian Lange, and the Vice-Minister of Justice, Ms Nguyen Thuy Hien, signed the new work programme in a ceremonial act for the period of April 2015 to April 2018. The programme is aimed at implementing the German-Vietnamese Rule-of-Law Dialogue which was initiated by a joint declaration of the two foreign ministers in 2008 and has been extended and detailed for the third time by the respective three-year programmes since 2009.

This intensive cooperation in the fields of law and the judiciary underscores the close partnership between the two countries, which are celebrating 40 years of diplomatic relations this year.

The Agreement is aimed at continuing the legal-judicial cooperation with the central idea being support for the rule of law and the modernisation of the legal system in Vietnam. The coming years will particularly be marked by a large number of reform processes to harmonise the existing regulations with the new constitution against the background that the new constitution entered into effect on 1 January 2014.

The IRZ is an important partner in the implementation of the Rule-of-Law Dialogue and will initiate many measures under the programme this year as well. The cooperation will focus on the consultations of the Ministry of Justice and the People's Prosecution Office concerning the upcoming reforms of the Civil Code and the Code of Criminal Procedure. Numerous measures are moreover planned with regard to the further training of legal practitioners. The IRZ offers these events in cooperation with the Judicial Academy and the Bar Association as partners.

The IRZ will also organise a conference aimed at strengthening human rights and the independence of the judiciary for the fifth time in a row with the Institute for Human Rights.

Against the background of Vietnam's current eagerness to carry out reforms and the fact that both the Party Conference and the Parliamentary elections will take place next year, the IRZ is looking forward expectantly to the upcoming developments and projects in Vietnam. 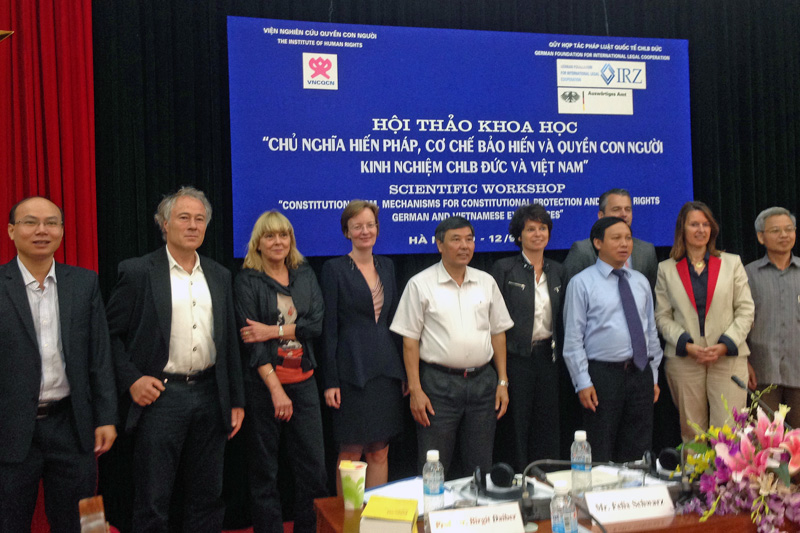 For the fourth time in a row the IRZ and the Institute of Human Rights have organised a conference on the protection and enforcement of human rights. Some 50 participants from academic institutions, the Supreme People's Court and the Supreme People’s Prosecutor’s Office as well as from other judicial institutions attended the conference. Human rights as well as fundamental rights have been a particular focus in Vietnam since the reform of the Constitution with effect from 1 January 2014.The new Constitution does not extend these rights, but nevertheless the government has been regularly pointing out that fundamental rights were moved up from chapter 5 to chapter 2 of the Constitution with the intention to strengthen the respect of them.Furthermore, the Ministry of Justice announced that all laws were to be reviewed or adapted to ensure that they are in line with the Constitution.Moreover, reforms to restructure the courts (separation of the court districts from the administrative districts) and to reorganise the public prosecutor’s offices have been initiated.The German presenters were Renate Citron-Piorkowski, judge at the Administrative Court of Berlin; Prof Dr Birgit Daiber, Seoul National University School of Law, and Susanne Bunke from the German Federal Ministry of Justice and Consumer Protection.They gave an overview of how the German Constitution came into being and has developed, of the obligation to respect fundamental rights, of the legal protection in case of violations of the Constitution, of the European Human Rights Charter as well as of similarities and differences of Vietnamese and German concepts of the Constitution.These topics were discussed with enthusiasm and in detail, whereby the different perspectives on fundamental and human rights were revealed.

"Law - Made in Germany" – Talks in Myanmar and Vietnam 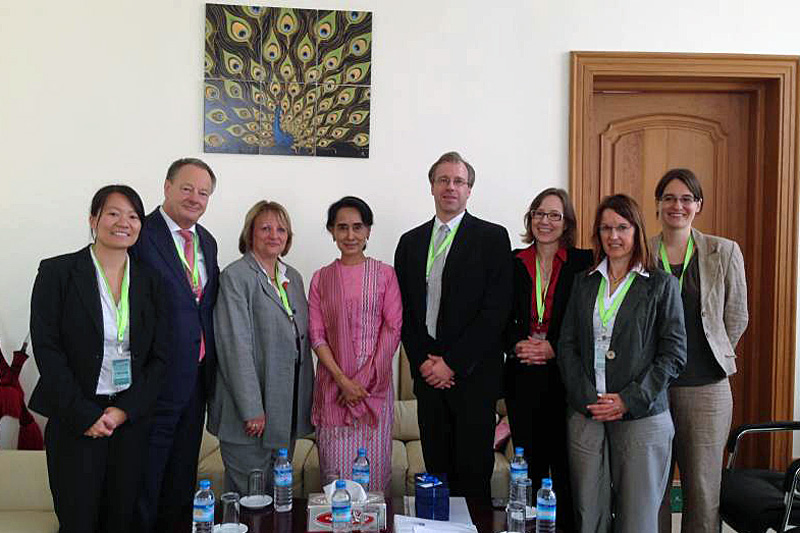 Since 2011, the Government of the Republic of the Union of Myanmar has been pursuing a reform course and aims at achieving a "disciplined democracy". During the rule of the military junta, which was in power until then, the country sealed itself off, in particular from Western influences, and did not implement any modernisations. Efforts are being made to develop a market economy within the changes of the political system, and the necessary framework conditions are currently being reviewed. Myanmar is the largest country in continental South East Asia and has huge economic potential. These circumstances attract a great deal of international attention and entail an active commitment by foreign players. Legal reforms are of considerable importance in such a period of radical change in order to set up a functioning and enforceable legal system, which is a stability factor and an indispensable prerequisite for economic prosperity.

Against this background, a delegation travelled to Myanmar at the suggestion of the Alliance for German Law and met with different representatives from politics, the judiciary and industry. The German participants were Sabine Leutheusser-Schnarrenberger, former Federal Minister of Justice, Axel Filges, President of the German Federal Bar, its Director Kei-Lin Ting-Winarto, Prof Dr Stephan Wernicke, General Counsel of the Association of German Chambers of Industry and Commerce, and Angela Schmeink of the IRZ. The dialogue partners were the Union Attorney General, the President of the umbrella organisation of the Chambers of Industry and Commerce, international legal advice organisations, German and Myanmar lawyers and the Nobel Peace Prize Laureate and elected Secretary General of the biggest opposition party NLD, Aung San Suu Kyi.

It was stated that there was a great need for legal advice, especially in view of the economic development. Myanmar is attracting many investors who set store by legal certainty and stability. As in many transformation states, the implementation of new laws poses difficulties. At the same time, "law and order" is very much at the forefront of the citizens' legal awareness. Many reforms – such as the new Constitution – are politically controversial and are now being tackled in the light of the Presidential elections to take place in 2015.

Germany has already established close relations with Vietnam, another country in South East Asia, through the German Vietnamese Rule of Law Dialogue, amongst other activities.

This institutionalised cooperation is of particular importance with regard to Vietnam's efforts to achieve the status of an industrialised country by 2020. Hence, the interdependencies between law and economy were discussed during a meeting of the German delegation with high-ranking Vietnamese Government representatives at the residence of the German Ambassador Jutta Frasch in Hanoi on 31 March. Participants of this exchange of opinions were: Dr Ha Hung Cuong, Minister of Justice, Truong Hoa Binh, President of the Supreme People's Court, Ho Thi Kim Thoa, Vice Minister for Trade and Investments, Dinh Van Cuong, Deputy Head of the Economic Committee in Parliament, Dr Vu Tien Loc, Chairman of the Vietnamese Chamber of Commerce, and Truong Trong Nghia, Vice President of the Bar Association. The delegation also visited the Minister of Justice, the Supreme People's Court (including a criminal trial), the Bar Association and Vietnamese lawyers. The Vietnamese dialogue partners explained the complex reform projects in the legal area, such as the court organisation or the review of laws on their conformity with the new Constitution which entered into force in January 2014. A main discussion point was the orientation to rule of law principles. There was agreement that efforts are necessary to increase legal certainty, in order to ensure that investors will find an attractive environment also in this respect. Insofar there will be sufficient potential for the mutually appreciated German-Vietnamese cooperation, both in the legal and the economic areas, also in the future.